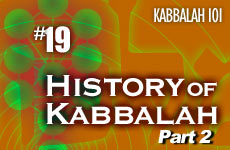 The imagery of Kabbalah, which examines God's actions through metaphor, can never lead to the creation of images or the suggestion that the One God exists in fragments.

We have shown in the previous article in this series that in the Torah itself there is a clear -- albeit veiled -- allusion to a deeper understanding of God and the ways in which He interacts with the world.

There are two other important points made in the Torah itself, which relate to the imagery and language of Kabbalah:

The first point is dealt with in the Book of Deuteronomy, Moses' farewell address, where he describes the revelation at Sinai:

"God spoke to you from amidst the flames; you heard the sound of words, but you saw no picture; nothing but a voice." (Deut. 4:12)

"And you shall be most careful; for you did not see any picture on the day that God spoke to you at Horeb from amidst the flames. For you may become corrupt and make a statue of some image." (Deut. 4:15-16)

Both of these verses seem to address an issue arising from the revelation at Sinai, since most people equate "revelation" with some sort of "vision." Yet here was a revelation where God's Presence was felt, His words were clearly comprehended, and yet no image was beheld, no picture was seen. It is a difficult idea, for our mind prefers to work with images rather than with words and concepts.

Most people equate "revelation" with some sort of "vision" yet the Torah clearly excludes that idea.

This injunction against projecting a corporeality onto God extends not only to a primitive physical picture of God, but also to anything that places God's being within the framework of human psyche or personality. This means that any type of study that describes God's actions must be devoid of any suggestion that God "feels" or has emotions that compel Him. The Mishna states this most emphatically:

He who prays [as a cantor, using the words], "Just as you had mercy on a nest of birds, so too have mercy upon us" is removed from his job, for he has described God's attributes in terms of kindness, when in reality they are decrees. (Brachot 34a)

Maimonides points out that when God is described as "kind" or "merciful," these words are to be understood as metaphors:

When we speak of "God's character traits" it does not mean that He has emotions, but rather that He does deeds that are similar to those deeds which a person does when he is acting with a certain emotion, but not that God has emotions per se ... For every deed of God's that we fathom, we describe Him with the title that conveys a source for such an act ... All of those deeds are deeds that are similar to deeds done by humans out of emotion and personal traits, which is not the case when describing God. (Guide to the Perplexed I, 54)

Thus we have an important point concerning Kabbalah or any other study of the Divine. Despite the fact that we describe God with physical metaphors, we can never allow that to become a visual image. And even if we use personality metaphors such as "merciful," "just," or "kind," they may never be taken as anything but metaphors.

These terms are a description of a pattern of Divine actions which match the way that we would act if we were emotionally inclined to do so. But God is completely beyond terms such as "emotion" or "personality."

The second point made in the Torah which impacts Kabbalah appears in the most famous of verses -- the Shema. We are enjoined:

This injunction presents a problem to the ability to divide God's actions into "components" such as the Ten Sefirot. This issue was raised many times over the centuries as a critique against Kabbalah (and was responded to), and its so-called "splintering" of God's unity into ten fragments.

The way that Kabbalah has dealt with this issue is best described by the Malbim, a 19th century commentator on the Torah in explaining the words of the Prophet Ezekiel. The prophet says:

The Malbim explains: a ray of light is one color. When it strikes a medium such as water, it is the trait of water that breaks it up into many colors. So too, God is one, unified whole. Our understanding however is limited and we must break it up into components. For instance, a child might not understand that the father who smacks him when he walks onto a busy highway is the same father that cuddles and loves him, and buys him toys. But the adult perceives it as one emotion.

So too, God's actions are only understood by us when examined separately. Yet we realize that breaking up God's actions into ten or any other amount is our inadequacy, not His reality. He is total oneness and unity.

We will continue in the next article, tracing Kabbalah through the words of the prophets.

Purim: The Holiday in Hiding
In the Shadow of David and Goliath
Where Do the Laws of Nature Come From?
Saadiah Gaon, Rashi and Maimonides: How Three Rabbis Revolutionized Judaism
Comments