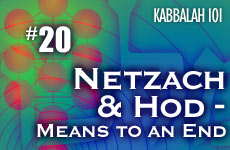 Just like a loving parent may seem cruel when harshly disciplining a child in order to instill good values, the "tactical" sefirot of netzach and hod are often not what they seem.

We have until now dealt with the first two groups of sefirot:

We will now describe the third group of sefirot which we will call the "tactical" sefirot; they are netzach, "victory," and hod, "awe."

When we call these sefirot "tactical," we mean that their purpose is not inherent in themselves, but rather as a means for something else.

For example, if I wish for my son, whom I love with all my heart, to make something of himself, I may have to be strict and stern with him in order to teach him discipline or insure that he applies himself to his studies, etc. The "strictness and sternness" is tactical -- that is, it is the means by which I endow the child with the benefits that I want him to have. But my intrinsic intent is that of kindness -- of giving him an education and teaching him values.

In another instance, I may use the tactic of kindness, though my intent may be antagonistic. I could lure an enemy into a trap by inviting him with a smile and a pleasant demeanor. The exterior façade of the act is pleasantness, its interior is punitive.

Understanding these two attributes of netzach and hod gives us a new perspective into understanding what is happening in the world. No longer do we merely look at an act at face value, and attempt to understand it as such, but we must look at it also in terms of "a means to an end."

We cannot look at the acts of God merely at face value.

The Kabbalah teaches that the questions of Job ("why do the righteous that suffer?") and of King David ("why do the wicked prosper?") find an answer in the attributes of netzach and hod.

For instance, the suffering of the righteous may be a test in order to heighten their reward, or a way to cleanse them in this world of their few sins so that they are pure and perfect in the World to Come. The wicked may be prospering in order that their feeling of complacency forestalls their repentance or in order that they should receive their entire reward on earth so their later destruction can be total.

There are other possibilities too; the main point is that there is more to God's actions than what appears to be happening at surface level.

These sefirot mark a turning point. Whereas the first two groups of sefirot deal with God's intrinsic will, and what it is that He desires to bestow upon man, these sefirot are focused on man: What is the most appropriate way for man to receive God's message? How can God's will be implemented most effectively?

Feet are usually only the means for a person's activity. The hands are the main instrument of action and the feet are simply a vehicle to bring the person to the place in which he wishes to execute that action.

The hands are the main instrument of action; the feet are simply a vehicle, a means of getting there.

This is the reason why we have a harder time discovering the motive for God's actions. For instance, God has sent a plentiful harvest. If we only had chesed-gevurah as perspectives, we would say that this is a reward for good deeds. But now that we have hod to take into account, we must ask ourselves: Is it really a reward? Or perhaps it is a repayment for some good while the full punishment waits in the wings?

There is a deeper purpose to these two sefirot, and that is an accentuation of the Divine truth. When one perceives the attribute of netzach and later the good bestowed upon the righteous, one realizes how well deserved it is.

Humans tend to be sloppy; a person who is generally good is forgiven minor errors etc. This means that the benefits received are not totally earned. But God's netzach –- i.e. the total retribution for the faults of the righteous -- sharpens incredibly the sense of deserving every bit of good that one obtains.

The same is true of the hod facet. The punishment of the wicked, when taken in perspective together with the good that was paid to them, can be perceived not as a mean act of vengeance, but rather as a justly deserved retribution.

This explanation allows us to understand the literal terms netzach and hod.

netzach is an act of God that seems to vanquish. It is an overt act of conquest. It appears to be the finished product of gevurah. gevurah is the strength, i.e. the potential to win, whereas netzach is the actual victory, attained through the strength.

But hod is much deeper. Fear is the feeling that we attain when confronting an overt threat, a man with a gun menacing us. But awe is the reaction to a person or item that seems to have a hidden strength or power. One is awestruck when meeting a powerful leader. Not because he is physically powerful or has a gun, but rather because of the power imminent in the person. A great person leaves us in awe because of the immense spiritual might that we perceive inherent in his humility and modesty.

So too with God, when in retrospect we see that within the leeway given to the wicked, a great storm was waiting to be unleashed against them.

Kabbala #24: Keter: The Sefirah that Isn't

The Real You
Deep Breaths
What Happened to the Truth?
The Japanese Everything Bagel Spice Recipe
Comments
MOST POPULAR IN Spirituality
Our privacy policy