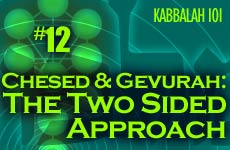 Chesed-kindness and gevurah-strength work in tandem, defining God's interaction with the world as a right/left pull/push phenomenon.

Before we proceed further to discuss more of the Ten Sefirot, it would be wise to spend more time on the interaction between chesed and gevurah.

These two sefirot are probably the most widely used to describe God's actions in the world.

The interaction between these two sefirot is the first parallel (as opposed to linear) interaction in the system of sefirot. That is, chochmah cannot act simultaneously with binah. It is only after chochmah has come up with the initial idea, that binah can process it. And only after binah has processed the information, can it become daat.

However, with chesed and gevurah it is different. On the one hand, it is still possible to imagine it as a continuum. For example, the foundation block of creation was chesed, whereas its continuation was gevurah, as we have described in the last installment of this series. On the other hand, chesed and gevurah may work simultaneously. Thus when a certain event occurs, we may analyze the chesed components and the gevurah components that are simultaneously a part of the event.

The metaphor most commonly used to describe this phenomenon is right and left.

The Ten Sefirot find their representation in body parts -- chesed and gevurah are the hands.

Different parts of the body can be used to represent different sefirot, a topic which we will discuss at greater length at a later time. Whereas the first three sefirot of intellect find their corresponding metaphor in the brain, the sefirot of chesed and gevurah find their representation in the hands. The reason is that they are the primary vehicles for God's "actions" in the same way that the hands are the primary vehicle for human activity.

The metaphor is more specific in the sense that there is a correspondence between the "right" and "left" aspect of the human limbs, and the interaction of chesed and gevurah.

Imagine both hands pushing a cart, or hauling a bucket. In such a case there is no difference between the two hands. It is basically two "times" one hand, the correlation of right/left is inconsequential. True the right hand head is a little stronger, but the job is the same for both and as such it would not be appropriate to use the correlation as a metaphor for the chesed and gevurah relationship.

But let us now take a different case. A person is hammering a nail into a board. The right hand pounds in the nail, whilst the left one holds the board down. A person screws in a screw with his right hand, and the left one pressures a nut in the opposite direction. Or a sculptor's right hand chisels stone, while his left hand holds the stone steady. In these examples, the right and left hand are cooperating -– by acting in a counter fashion!

We see from this that chesed and gevurah are acting simultaneously towards the same goal –- by exerting forces in opposite directions.

Let us be a little more specific regarding the specific roles of chesed and gevurah. When the sculptor chisels the stone, his right hand naturally takes the chipped stone along with the motion of his chisel. His left hand, however, holds the stone in place, and through the resistance to the movement of the chisel gives the stone its sense of "self." Thus, the stone is not taken along with the chisel, but rather it stands its own ground. Although the right hand has acted upon it, it has retained its own properties, while bearing the right hand's "message."

This describes exactly the relationship of chesed as the "right hand" and gevurah as the "left hand."

The main purpose of God's deeds is kindness -- thus chesed is stronger than gevurah.

The main purpose of God's deeds is kindness. Thus chesed is the stronger and more dominant of the two sefirot. And it is performing the act that God really had in mind.

But we have previously described the problem inherent in chesed. If a person lives as a beneficiary of someone else's largesse, then he loses his own identity. He becomes a vessel of the benefactor. This would be similar to the board being swept up in the motion of the hammer.

Therein, the sefirah of gevurah assists. It is the "left hand" that pushes in the opposite direction and gives the board its own existence. Whereas the right hand pulls along, the left hand pushes back. Whereas the attribute of chesed draws things into God's sphere of being, gevurah pushes the object away and proclaims: "Away from me, stand on your own two feet; earn your own keep."

The Rabbis of the Talmud have taught us:

A person should always draw people closer by means of his right hand, and push them aside with his left hand. (Sotah 47)

It is an important lesson in human relationships. The stronger and more dominant feature of human interaction should be the drawing closer and friendship of people. But enough "push" must be included to allow for the retaining of individual self. Benevolence towards an independent individual creates bonds and bridges; towards a dependant person, it creates annexation and is overwhelming.

(As an interesting footnote to this topic it is worth noting that people who were involved in Kabbalah study, such as many of the Chassidic groups, liked to wear their garments with the right side overlapping the left, to demonstrate this relationship. This is in contrast to modern western style where men's garments, i.e. shirts and coats, have a left/right overlap.)

Purim: The Holiday in Hiding
The Promise Of The Land
Which Chat Are You On?: Parshas Behar/Lag Ba’Omer
Do You Like Slow-Cooked Food? Thank the Jews
Comments
MOST POPULAR IN Spirituality
Our privacy policy