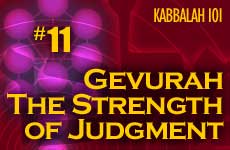 The fifth of the Ten Sefirot -- gevurah -- is the second sefira of action and one which brings strict justice into the world.

Gevurah or "strength" is usually understood as God's mode of punishing the wicked and judging humanity in general. It is the foundation of stringency, absolute adherence to the letter of the law, and strict meting out of justice. All this contrasts with chesed or "kindness" (discussed in Chesed - The World Is Built On Kindness) which implies mercy and forgiveness.

We thus speak of God's primary modes of action as being the kindness and unaccountability of chesed, versus the stringency and strict accountability of gevurah. It is called "strength" because of the power and fury of God's absolute judgment.

Although the above colloquial interpretation is not wrong, the roots of gevurah are deeper than the mere sense of strictness and judgment.

To gain the more basic sense of gevurah, let us return to the act of creation, which involved unbounded chesed. The rabbis teach us that:

When God said, 'Let there be a firmament,' the world kept stretching and expanding, until God said, 'Enough!' and it came to a standstill. (Chagiga 12a)

Chesed on its own is endless. However, the transactions that are "tit for tat," or "measure for measure" are based on what one deserves and are clearly defined and limited. The second element limits the first element. If goods are sold for money, then the amount of money given defines and limits the amount of items sold.

However, when something is given for nothing, then there are no necessary limits placed on what is given. True, when a human being acts in a chesed mode, he is limited by the resources he possesses, but God is infinite and therefore His chesed is boundless.

When God proclaimed "Enough!" He was introducing a new concept, hitherto unknown to the world: The concept of "limits" or "boundaries" -- the concept of "finite."

But what defines this boundary? It is not because of any limit in Divine resource and ability, for God has none. Rather, it is the limits of the recipient. God determined that the relationship would be "something for something." If man had enough "purchasing power" he could gain commensurably; if not, he would do without.

The entire system of reward and punishment is rooted in this attribute of gevurah.

Thus the entire system of reward and punishment is rooted in this attribute of gevurah, and that is why it is often referred to as middas hadin -- the attribute of "law" or "judgment." From the point in creation when God proclaimed "Enough!" His beneficence has not been unbounded and infinite; it has been bartered and exchanged for man's deeds.

Isn't this a letdown –- that God, Who has an infinite bounty to bestow, limits it to the begrudging pittance that man is capable of acquiring? Why would God limit His kindness?

The answer is if God were to treat us only via the perspective of His infinite gifts, then we might have many gifts but our existence would cease to have any meaning. For whatever existed in the world would be due to His magnanimity. We could be here or not, the world would receive and continue to receive, regardless.

But if the world possessed only that which we've earned on its behalf, then our existence would be meaningful.

If only chesed existed, then our existence would be akin to a person who is institutionalized for life.

For example, imagine a situation where a person in need of a livelihood is hired by a friend to work in a factory. He is put to work making widgets and is paid a reasonable wage. One day he comes to the factory late at night and sees a truck pick up all the widgets he produced and dump them into the garbage. He realizes that the "job" is really just charity and his work is meaningless.

Do you think he could continue working?

Let us expand this illustration. An infirm person is totally dependent on caregivers, and on financial providers. All of his needs are taken care of, yet he begins to shrivel up mentally and emotionally. He feels that as a person he does not exist. His existence is simply the largesse and goodness of other people. It is only when a person's actions carry some import that he truly is aware of his own separate existence.

A powerful paradox exists. On the one hand, we are in awe of this attribute of gevurah knowing how difficult it is to make it in this world, where every act is scrutinized and weighed, and where by the strength of our own deeds that we must survive. Yet it is the only way that we can survive! If only chesed existed, then our existence would be akin to a person who is institutionalized for life. Yes, he is not lacking shelter, clothing or food, but he exists not as a capable human being.

At first God meant to create the world only with the attribute of justice ... for the real existence of man is through justice.

This statement might seem confusing as it implies that the world was meant to be created with the attribute of judgment. Did we not state in our previous lesson that Creation is perforce an act of chesed, that by definition the first act must be chesed?

The answer is that we cannot confuse the act of creation with the modus vivendi of life within the creation.

For instance, let us analyze parents raising a child, or a wealthy man deciding to bestow kindness upon a pauper. They both realize that the best way to help a person is by providing him with a means of independent sustenance. The parents proceed to give the child an excellent education and the wealthy man gives the pauper a job. In both these cases the initial act was chesed. It was not prompted by anything done before, and it is not a return for a previous favor or in anticipation of a future gain. But in both cases, once the initial chesed has only sparked the relationship into existence.

It is in this sense that the rabbis taught us that creation was an act of chesed, but the ongoing interaction and basis for continued existence should have been based on strict justice although it was not. (We will see later how this was changed.)

There is another point concerning gevurah that merits a point of discussion. The word gevurah literally means "power" and "strength." It is at first glance taken to allude to the fury of God punishing the wicked etc., which to us appears as an act of mighty conquest.

God need not "kill" someone; He simply refrains from giving him life.

But this is a misleading metaphor. The primary mode of God's punishment is a withholding of good that might have otherwise been bestowed upon man. God need not "kill" someone; He simply refrains from giving him life. He need not impoverish a nation; He simply stops giving rain. Gevurah is primarily an act of constraint and restraint.

In what sense is this "power" and "strength" of gevurah displayed?

The answer lies in a teaching of our rabbis concerning human character:

Who is a strong person? He who sublimates his own passions. (Ethics of the Fathers 4:1)

Our rabbis taught us two extraordinary points in this seemingly simple and pious saying.

First of all, the strength to withstand an internal urge needs to be greater than the opposition to resist an outside force. Many a valiant soldier has succumbed to personal addiction!

Secondly, constraining a basic urge requires more power than an occasional outburst of greatness. If offense is the best defense, it is because restraining an enemy is more difficult than overpowering him.

Let us now take this analogy (with a grain of salt, of course) and compare it to God's relationship with man.

The primal force in the world is chesed. It is a manifestation of God's desire to give man whatever possible. The second force, gevurah, restrains the first basic force of Divine Providence and bids Him not to give.

Imagine a parent watching a toddler struggle to walk. As the toddler falls again and again, the parent must muster every ounce of strength not to extend a hand. This is gevurah at its most powerful.

Threadbare
Deep Breaths
What Happened to the Truth?
The Japanese Everything Bagel Spice Recipe
Comments
MOST POPULAR IN Spirituality
Our privacy policy