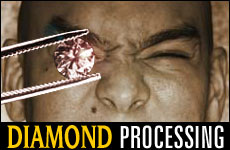 Every person has buried deep inside a dazzling, million-dollar gem. We just need to cut away the dirt to find it.

The Mishnah [Ethics of the Fathers 4:3) teaches us: [Ben Azzai] was accustomed to say: "Do not be scornful of any person, and do not be disdainful of anything, for you have no person without his hour, and you have no thing without its place."

Rabbi Shalom Dov of Lubavitch showed great affection for the simple folk. One time, a chassid who was a diamond merchant asked the rabbi what virtues he saw in these unlearned people.

The rabbi asked the chassid whether he happened to have any of his merchandise with him, whereupon he showed the rabbi a packet of diamonds. The rabbi pointed to a rather large gem and said, "That is indeed a beautiful diamond."

The chassid smiled. "No, rabbi," he said, "it happens to be full of defects."

"But it is more beautiful than the other stones," the rabbi said.

The chassid explained, "It happens to be larger than the other stones, but because it has defects which can be seen with a magnifying glass, its value is much less. Now here," he said, "is a smaller stone that may not appear as brilliant as the larger one, but it is a perfect stone, and is very valuable. You see, rabbi, to know the value of diamonds one must have expertise."

"I understand," Rabbi Shalom Dov said, "but the same thing is true of knowing the value of people, where one must also have great expertise."

Several years ago, I fully appreciated the truth of the rabbi's words. I had begun a project in Israel to rehabilitate ex-convicts who had run afoul of the law because of their need to support their drug habits. In meeting with the first group, I tried to point out that people who have a good sense of self-worth are unlikely to do things that would cause them harm, just as someone who owns a beautiful new automobile would take caution that it not be scratched and marred.

At this point one of the clients interrupted me, exclaiming, "You expect me to have a sense of self-worth? I am 34, and I have spent 16 years of my life in prison, having been convicted eight times. When I get out of jail, no one wants to hire me because of my prison record, and I can't get a job to support myself. When my family is informed that I will be released from prison they become terribly upset. I am a burden and an embarrassment to them. I am sure they would rather have me dead! How could I possibly have a feeling of self-worth when everybody in the world considers me worthless and nothing but excess baggage which they would like to be rid of?"

I was taken aback by both this man's desperation and the apparent validity of his words, but I said, "Avi, have you ever seen a display in a jeweler's window? There are dazzling diamonds worth many thousands of dollars. Do you know what those diamonds looked like when they were first extracted from the mine? They looked like dirty, ugly, worthless pieces of glass. Anyone who would judge by their appearance would throw them away. However, there is an expert who scans the ore, and he may pick up one of these 'worthless' rocks and say, 'Wow! I bet there is a million-dollar gem in this one!'

"An onlooker would say, 'Throw that piece of junk away and wash your hands from the dirt.' But the expert says, 'Just wait and see what's in here.' He then sends the dirty rock to the processing plant, and eventually it yields a dazzling 15-carat diamond, which can blind a person with its brilliance. Of course, there is no way anyone can put such beauty into a 'dirty rock.' What the processing plant did was to cut away the layers that covered over the beauty. It only exposed the beauty that had been concealed.

"Avi," I said, "you are telling me that you are worthless. I am the expert who can see the precious diamond within you. If you stay with us, we will help you reveal it."

Avi remained in treatment for three months, then went to a "halfway house," got a job, and continued to work on his recovery. Eventually he moved to independent living.

Two days later Avi called to state that he was at the apartment with a truck, but that the furniture was old and dilapidated and could not be used. Annette told him that she did not wish to refuse a donation, and to bring the furniture anyway,

Avi loaded the truck, and at the halfway house was dragging an old, broken sofa up the stairs when an envelope containing 5,000 shekels (about $1,800) fell from underneath the cushions. In the past, Avi had stolen purses and had broken into homes for as little as 10 shekels. Here he had 5,000 shekels of whose existence no one else knew. Without being well-versed in Jewish law, he could have easily thought that the rule of "finders-keepers" would apply, and there would have been no crime in his keeping the money.

Avi called the family to report his find. They thanked him, and suggested he give the money as a donation to the halfway house.

I subsequently met Avi and said, "Didn't I tell you that there was a beautiful diamond within you? How many otherwise honest people would simply have pocketed the money and not said a word about it? Your diamond is brilliant, Avi."

On a subsequent trip to Israel, Annette showed me a plaque that Avi had affixed to the door of the halfway house. It reads: DIAMOND PROCESSING CENTER.

Rabbi Shalom Dov understood the Mishnah well. There is no person who should be scorned. You just have to be an expert.

From "Visions of the Fathers" (Shaar/Mesorah)

In Service of the King: Ethics of Fathers 4:6

Surrounded at the Nursing Home

Five Strategies for Increasing Happiness
The 21st President of the United States: Failure or Inspiration?
Hiding Their Jewishness
The Jewish Pope: Following the Questions Home
Comments