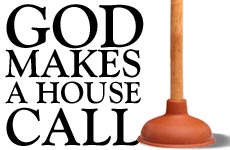 A little blockage enables one man to appreciate the wonders of the human body -- and the power of genuine prayer.

This is not my usual illuminating commentary on the deep mysteries of our faith; this is more of a medical megillah. It's a true story and I've got a note from my doctor to prove it.

It's 2 a.m. and I've got -- excuse my French -- a urinary blockage. My wife, a Florence Nightingale, an experienced RN, understands immediately. We're off to the ER.

This episode began a week before with a series of "procedures." "Procedures," the mantra of the medical community, since it doesn't raise visions of blood, pain, and tears.

"Procedure? Sure Doc, let's do a procedure. You didn't say cutting, slicing, sewing, cauterizing, removing, did ya? Procedure -- such a nice non-intrusive word. Do it."

And we did. Lots of ‘em for a week -- topped off by two days in that strange piece of real estate downtown that has 400 bedrooms, 400 baths -- not one fireplace -- and a large non-kosher cafeteria. And if you're lucky, the rent's covered by Medicare.

So now I'm home, after a week you'd wish on the commander of Hizbullah. It's supposed to be all over. I'm supposed to be as free flowing as the mountain brook as it splashes playfully down Mount Hebron to the sea. But uh oh. All of a sudden -- that problem.

Now here I must digress to educate readers who are more into Seinfeld, Dershowitz, and Larry King than Maimonides or Rashi, the great Torah commentators. We Jews have an exalted view of He who created the cosmos and the capillary; He who activates the pulse of the migrating Monarch butterfly, the mother fox who knows to suckle her young, and the astronomer who peers into the Milky Way.

A speck of dust in a pink passageway -- and you're toast.

C. S. Lewis, the great Christian philosopher, calls our bodies: "vast and perilous estates pulsating with the energy that made the worlds." We Jews share his awe of the human frame and understand that we only lease these earthly quarters. Laced with a million possibilities for failure, the body only works because of some sleight of hand we don't understand. Its operation is a mathematical nightmare. A defiance of the laws of probability that would make an engineer wince.

Thought, sensation, breathing, digestion, locomotion, and elimination all depend on a synchronous performance by a set of perfectly functioning systems. A speck of dust in a pink passageway -- and you're toast.

To declare their admiration, awe, and thanks for these beneficent operations, observant Jews have a daily prayer -- Asher Yatzar. You create man with "many openings and hollows" it says. And if "one of them were to be ruptured... or blocked, it would be impossible to survive." It goes on to say, "Blessed are You, Lord, Who heals all flesh and acts wondrously."

Now from the sublime back to my bedroom, eerily illuminated by the nightlight. My "hollows" -- one of them -- as blocked up as Pharaoh's heart.

Back to the ER? Unbearable.

Then I saw it on the bedside table. My son -- impelled by a faith far stronger than mine -- had sent it. A large, garish, laminated poster. The prayer, Asher Yatzar, in the middle, surrounded by cartoon-like illustrations. Primitive, almost laughable, especially to me: a tightly affiliated but imperfect Jew, whose mitzvah batting average does not qualify me as a Hall of Famer. But there are no atheists in a foxhole or the ER, as any nurse will testify. And when you're drowning in a sea of suffering, if they throw you a noodle lifeline, you'll hang on.

I read the prayer as I ached. Twice. In English and in Hebrew. The ardor, the passion of my Yom Kippur prayers was a whisper compared to this whirlwind. I said it twice, reading each word slowly and distinctly. I wanted no misunderstanding of my plight or my passion. The Master Healer must have a clear, comprehensive diagnosis.

And then it happened. Relief. No ER, no intrusive techniques. Asher Yatzar -- an Internet engine of such power that it immediately reaches the sublime portal. Petitioners, penitents, praisers, pleaders worldwide -- all simultaneously trying to connect. Human crevices and corridors stopped up all over this troubled world. Billions of prayers -- airborne -- shading the earth itself; and MINE, on the wings of Asher Yatzar went through.

It stands now on my bedroom wall. (You can get a copy of your own by calling 1-800-700-9577.) I admit that the ER number is also scribbled in pencil on a pad on my night table. But it's well below Asher Yatzar, and rapidly fading in the sunlight streaming through my bedroom windows.

An Open Letter from God during Coronavirus