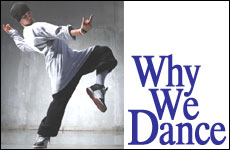 "Dance is the hidden language of the soul." ~Martha Graham

Of the variety of physiological responses that human beings exhibit when we receive certain types of information, I find dance to be the most intriguing. Like laughter, it's not intuitively obvious why motion should sate our desire for expression. It's certainly possible to process and enjoy music (or other forms of information) without moving at all. How does it help to add kinetics to the experience?

An '08 article in Scientific American suggested that it might have something to do with stimulating the orbitofrontal cortex and the ventral striatum but concluded that, "Scientists aren't sure why we like movement so much, but there's certainly a lot of anecdotal evidence to suggest we get a pretty big kick out of it." Indeed. For those who prefer a less reductive approach, Jewish teachings on the topic may offer a satisfying alternative.

The Jewish mystical tradition holds that there were a series of epochs or pre-universes before our own - each with its own unique characteristics and energy array. (Interestingly, there are analogues to this belief found in theoretical physics.) These dimensions, Kabbalists believe, are alluded to in multiple biblical narratives and are even embedded into various biblical genealogies. The dominant trait of the world that preceded ours was that it was conceptually circular (unlike our own, which is linear).

Unlike the linear plane, which is intrinsically fraught with inequality and hierarchy, the circle world was built on equity, harmony and balance. As such, it represented our collective past as well as our ultimate destination. A corollary to this concept would also suggest that all ideas and movements which stress the circle world qualities are unconsciously tapping into an innate human desire to rectify reality and return to our roots. In this regard, the modern drive for equality in its various forms hearkens back to our primal, collective pre-history. For better or worse, however, the only method we possess to bring this about is through our presently flawed and hierarchical plane of existence. The circle is the future. This is the reason that Jewish tradition has embraced the symbol of the circle dance.

There are two quintessential Biblical stories about dancing which explain the two purposes of dance from a spiritual perspective. The first is when Miriam the Prophetess leads the Jewish women in a (drum) circle dance directly after the nation was delivered from the Egyptian army. Her dance comes on the heels of the joyous song that the men sang. Interestingly, the verse literally translates as the men "will sing," in the future tense, implying that in the moment they were not fully in touch with the newly opened access point of "circle universe" awareness. The women, by contrast, seize the energy of the moment and channel it to kinetically express their joy.

The Miriam story is very deep, but suffice it to say that there is a certain point at which one's consciousness expands to such a degree that it can no longer be contained by the heart and mind alone and one's entire being needs to be utilized to capture the moment. As Kabbalistic thinker Sarah Schneider explains, it's "like trying to run a complex graphic program on an antiquated laptop, there is not enough space in the computer's brain to hold the complexity of operations...similarly here, 'circle awareness' is so vast that it takes an entire body to hold it." At times it requires a whole network of people together.

Ecstatic dance reflects the desire of the inner self to transcend its limitations and merge with something greater.

Anyone who has experienced it can attest there is huge power generated by a large group dancing with a unified purpose. The whole is greater than the sum of its parts and the import of the moment can be palpable.

The second Biblical account of the spiritual power of dance is that of King David's ecstatic dance before the Ark of the Covenant as it was being brought into Jerusalem. In David's case, the dance was a vehicle for him to access deeper recesses of his consciousness. Like other repetitive acts such as mantras, prayer and meditation, the dancing overrides analytical consciousness, opening a purer and deeper channel. In this regard, dancing and praying may be considered very closely related (when done properly) and is the reason that many mystically inclined religious groups, such as Judaism's Hasidim, employ so much singing and dancing in their observance.

The intensity of David's dance raised the ire of his wife Michal, who was shocked at the raw emotionality he displayed in public, commenting that he had conducted himself "as one of the empty people." The King's retort defended his exuberance and suggested that it would intensify further in the future declaring "I will continue to play before God!"

Like all good art, ecstatic dance reflects the desire of the inner self to transcend its limitations and merge with something greater; this is the root of its power. Most people find such a transcendent state to be uniquely blissful. Some spend their entire lives in its pursuit. From a Judaic perspective, it is the soul's spontaneous desire to reach beyond its corporeal container and express its most sublime root in the highest realms.

"Dance is the hidden language of the soul." ~Martha Graham