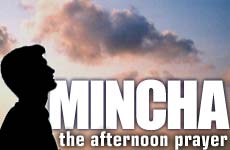 Mincha is an oasis of spiritual time in a tough workday, a moment of calming nerves and focusing on priorities.

Jews are bidden to pray three times daily to God. The Shacharit prayer takes place in the morning. It is the longest of the three daily prayers and contains within it the basic affirmations of Judaism ― the Shema, the Amidah and the ideas of repentance, self-improvement and loyalty to God and Israel.

The Maariv prayer takes place at night, after sunset. It is much shorter in length than Shacharit, but nevertheless includes again within it the basic Shema and Amidah prayers.

The shortest prayer service of the day takes place in the afternoon, or at least just before sunset, and is called Mincha. It is composed of the recitation of Psalm 145, the Amidah, a prayer of repentance and the concluding prayer to all Jewish prayer services, Aleynu. Aleynu is a reaffirmation of Jewish goals and a hope for the better world for all humankind.

Mincha is usually a 10-to-15-minute prayer service, but for much of the Jewish world, it has become almost a forgotten prayer service. It is not the length of Mincha that has caused this, but rather its inconvenience in coming in the middle of a busy working afternoon. But in that fact alone lies perhaps its major importance and necessity.

Our Sages attribute the origin of our three daily prayer services to our patriarchs, Abraham, Isaac and Jacob. Abraham created the prayer time for Shacharit, Isaac for Mincha and Jacob for Maariv.

It's an oasis of spiritual time in a tough workday, a moment of calm and focus on priorities.

The rabbis of the Talmud deduced the role of Isaac in creating Mincha from the verse in the Torah that tell us that "Isaac went out to converse in the field" (Genesis 24:63-65). Converse with who? The Torah itself is silent on the subject. The rabbis are of the opinion that the conversation was between Isaac and God. And since the Torah describes this event as happening "before evening," Jewish tradition placed the time of Mincha as being in the afternoon before the time of the sun setting.

Mincha is also connected with being "in the field." Shacharit and Maariv are possible to be prayed outside of the time constraints of our mundane everyday tasks. Not so Mincha. It stops us in the middle of work, shopping, school, and all other usual tasks that life places upon us. It meets us "in the field," at our desks and in our factories ― and it is always inconvenient. But it is an oasis of spiritual time in a tough workday, a moment of contemplation, a calming of nerves and a focusing of priorities. As such, it is perhaps the most important and meaningful prayer service of the day.

Today, there are many "Mincha" prayer groups in companies, stores, colleges, hospitals and in geographic areas of cities where a considerable number of observant Jews are to be found.

When I was a lawyer many decades ago in downtown Chicago, there were few if any such "Mincha" prayer groups. I would lock myself in my office, tell my secretary that I was making an important private call, and pray. (Yes, I was placing a personal call to the Almighty.) Many times I felt a sense of rejuvenation and exhilaration after this 15-minute prayer break. It helped me overcome the disappointments and frustrations that are the daily lot of all of us at our places of work.

What is lacking in much of current Jewish life, even amongst those who are nominally affiliated with synagogues or Jewish organizations, is a sense of personal participation in Judaism, its rituals, values and blessings. We are members but not participants. No sermon, article, book, class, etc. can connect one to being truly Jewish and feeling so in one's inner soul to the extent that a simple Mincha prayer in the midst of a busy afternoon at the office can.

Mincha becomes a major component of experiencing spirit and holy transcendence in daily human life. It can literally change the way we think about people, the world, life, ourselves.

A Peek into the Jewish Prayer Book

The Shema: Why We Cover Our Eyes

Mayanot on Prayer #4: Negotiating with God

The Nuts and Bolts of Prayer
Blessing on Chewing Gum
Was Rahab a Prostitute?
Extras In Our Own Epic
Comments
MOST POPULAR IN Mitzvot
Our privacy policy