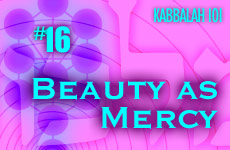 The dynamic of interaction between the three sefirot of "action" can be compared to a courtroom where kindness, chesed, is the defender and judgment gevurah/din the prosecutor.

The three sefirot of chesed, gevurah, and tiferet are the primary sefirot of action, and as such have their own dynamic of interaction. To express some of this dynamic, each has another name that defines their relationship among themselves. chesed, "kindness" remains "kindness"; gevurah, "strength" is also called din, "judgment"; and tiferet, "beauty" is called rachamim "mercy."

The following verse to illustrate the relationship of these different modes. In a section dealing with God sitting and judging the nation of Israel, a prophetic vision describes the scene as follows:

I saw God sitting on His throne and all the heavenly hosts are standing at His right and at His left. (1 Kings 22:19)

Right and left refer to opposing perspectives in dealing with the case at hand. Kindness, the defender, sits on the right, and judgment, the persecutor on the left and the judge sits in the middle.

These three elements are seen in the "arrangement" of the sefirot as well,

We even use these points of reference colloquially. When a person is excessively carping or critical, we say he "woke up on his left side this morning." A positive approach is "getting off on the right foot." While a midpoint bespeaks of fairness and neutrality.

To understand how this applies to the sefirot, let us first explain the extremes and then we will explain the middle.

Kindness is giving. It is a trait that expresses a need or desire of the giver. A person comes home one morning and feels that his life is narrow and self-centered. He wishes to be kind to people and sets up a foundation to promote some cause or to help some people. He has as yet to meet anyone destitute. Thus the act of chesed is an act whose dynamics lie in the giver's domain.

The dynamics of judgment lie solely in the recipient.

The dynamics of judgment, on the other hand, lie solely in the recipient. A man has plowed a field for someone else and the fruit of his labor is inherent in the grain that has grown. When he picks up his salary, he is basically recouping his own labor. The "giver" is merely confirming the truth of the laborer's efforts. Thus a person "standing on his own" with no need for recourse from an "other" is the paradigm of judgment.

Mercy is different than both the above traits. Mercy is a feeling of pity that someone in need has evoked in me. If I never meet someone cold, hungry, or lonely then I can never be said to have mercy on someone. Thus, the recipient causes the mercy, but the gift given is all the donor's.

THE ROLE OF THE JUDGE

If we are to go back to the metaphor of the courtroom, we could explain this dynamic as follows. The judge is not there primarily for deciding if the prosecution is factually correct. Rather in a heavenly court all of the facts are known. Rather, the prosecutor presents the picture of the evil act that has been done, the defense presents the qualities of the person, and it is up to the judge to weigh the deed vis-`a-vis the merits of the person and decide how to sentence accordingly.

We find this distinction between kindness and mercy in a number of non-Kabbalistic sources as well. Thus, the Targum, which is an Aramaic translation of Hebrew, will use the word chesed derogatorily (see Rashi Vayikra 20,17 and Mishlei 25,10). The word rachamim in Aramaic translation, on the other hand, means love and friendship. For kindness is demeaning by its very nature, for a person that lives only by the dint of someone else's support is not a whole person.

Mercy, on the other hand, is sparked by my evoking a feeling of warmth and kindness in another. It is a human-to-human emotion and it is the same quality as friendship. Another point about mercy is made in this Talmudic injunction that states:

"One is not permitted to have mercy on a person who has no sense." [This means that a person whose foolishness has got him into trouble should feel the folly of his actions.]

This is a statement that only applies to mercy and not kindness. What this statement teaches is that the goal of mercy is to help a person. But if that person has no sense, then he will take any favor for granted, and not learn his lesson. The only way for a fool to learn his lesson is to suffer the consequence of his actions.

The goal of kindness is the expression of goodness and greatness.

The same cannot be said of kindness, however, for the goal of kindness as such is not the assistance of the other person as much as the expression of my goodness and greatness. It still is not advisable to shower the fool with largesse of any kind, but it is not an inherent contradiction of kindness.

Mercy, in line with its position as being in between kindness and judgment, is likened to a loan while kindness is likened to a grant. A loan has the element of kindness in it, for it is unearned. But in the end, a loan is meant to be consistent with judgment as well, for the money will have been returned.

Snow: The Dark Side
Don’t Believe in Other Gods Versus God is One
Seeing Without Eyes
Why Shouldn’t We Eat Whatever We Want?
Comments
MOST POPULAR IN Spirituality
Our privacy policy
Aish.com Is Looking for Great Writers