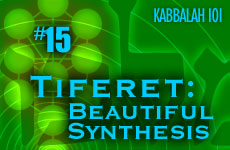 Of the Ten Sefirot, tiferet -- which literally means "beauty" or "glory" -- is the most central as it mediates between chesed ("kindness") and gevurah ("strength").

Tiferet -- which literally means "beauty" or "glory" -- is the most central as it mediates between chesed ("kindness") and gevurah ("strength").

Literally taken, the word "middle" implies a compromise, a "little of this" and a "little of that." But the word "middle" has a much more positive and pronounced connotation when used as a description of tiferet. It connotes a way that is of a completely different nature than either of the two previous sefirot -- it uses them both, but in amounts that suit an entirely different mode of activity.

For instance, every country has the most important task of surviving among other nations. This is the duty of the prime minister, president or king. To this end, he has a state department which works on building friendly and pleasant relationships amongst the various nations. Then there is a defense department whose job is to prepare for war against belligerent nations.

If we enter each one of these departments separately, we discover that their ideology and worldview are totally incompatible. The state department is working under the premise that nations are peace loving, that belligerence is the result of misunderstanding, that cultural and economic exchange are the greatest guarantors of peace and that compromise and concession are harbingers of stability.

The defense department, on the other hand, works under the premise that given the right conditions, even one's closest allies may become enemies, and war is a human instinct. Strength and might are the only realistic factors in determining one's world position, and intransigence and ruthlessness bring stability and peace. One's goal is to strive for might.

Thus each department, in order to be effective, not only acts in a certain manner, but has an inner worldview that includes its goals and philosophies.

It is the higher station -– whether president or prime minister or king –- who contains a worldview that sees each of these departments, not only as an end in itself but, rather, as tools for a "higher" goal that includes both of these ideologies as a mere subset of the whole.

Thus the president's view is that neither strength in itself nor friendship in itself is the ultimate goal of the country as a country. Rather, the ultimate goal is survival and development, and these tools are available for this purpose: strength and friendship. On a case by case basis the president uses one or the other tool as a way of ensuring the goal he has in mind.

The same is true of chesed, gevurah and tiferet. Chesed has an innate "ideology" of goodness. It wants to give for the sake of giving. It sees in this the ultimate goal, and the more one gives -– regardless who is deserving -- the greater and better things.

Gevurah, on the other hand, sees giving as poisonous. Only things earned by equal and fair labor are "good." Thus, it has a powerful ideology of "quid quo pro" and "no free lunches." It sees the ultimate goal of creation as every creature earning its own way.

Tiferet comes along creating a synthesis of both of these approaches. It includes both these approaches because it has a broader goal in mind, and therefore makes use of both. Its goal is "the development of the human being to his greatest potential."

The goal of tiferet is "the development of the human being to his greatest potential."

Many times this is accomplished by letting him earn his own way, whereas sometimes one needs an injection of unearned and freely given bounty. Neither the ideology of "no free lunches" nor "forever give unconditionally" are valid philosophies. Rather, each one is an element that may be used towards a higher and more encompassing ideal.

Indeed, a healthy person deals with his or her child in this manner. His goal is that the child should develop to be the best he can. Usually this means that the child has to use his own capabilities. But where those means temporarily fail, the parent injects the needed "unearned" love, money, praise etc. to keep the process going.

Tiferet then is not a "compromise." A compromise has no overriding vision of integration. Rather, when two sets of horns are implacably locked, one whittles down enough of each to remove the danger of mutual destruction. Tiferet is, rather, a long and more unifying picture which gives each set of horns their rightful place, so that they are no longer locked in combat.

This is why it is called tiferet, "beauty," for beauty is always attained by integrating elements and playing them off against each other. Black and white are opposites; their proper integration creates beauty. Beauty does not adjudicate contrasts and turn everything gray; rather, beauty integrates both black and white into a picture of depth.

Kabbalah 101
previous
Article #15 of 24
next
Like What You Read?  Give Jews around the world the chance to experience engaging Jewish wisdom with more articles and videos on Aish. It would make your mother so proud and as a nonprofit organization it's your support that keeps us going. Thanks a ton!

From the Desert to the Holy Land - Current Events and Kabbalah: Part 2
Why Are The Prayers Of Yom Kipur So Repetetive?
Ha'azinu 5783: A Time for Unity!
Twisted Thinking
Comments