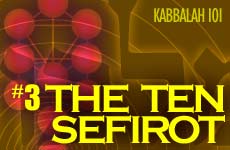 A Kabbalistic concept explaining the multiplicity of God's manifestations in the world helps us see how God is truly One.

The building blocks of Kabbalistic terminology are the Ten Sefirot. These are the ten emanations or "lights" through which God interacts with, and relates to, His world.

When Kabbalah looks at various events that have transpired in the world, or various Divine commandments in the Torah, it classifies and describes them in terms of these various modes of interaction.

Before we describe these Ten Sefirot and their use, we must deal with a fundamental problem.

ONENESS OF GOD VS. THE TEN SEFIROT

Judaism has placed at its masthead the principle of the Oneness of God.

A Jew proclaims twice a day, "Hear, O Israel, God is our Lord, God is One."

How do we now dilute the belief in the Oneness of God with the idea of "Ten Emanations" of God?

How do we now dilute this most important of beliefs with the idea of "Ten Emanations" that seems to imply God is more than one?

This question was posed to the Rivash (14th century): "Do you Kabbalists not also believe in many Gods, as you postulate the Ten Sefirot?" We will paraphrase his reply.

God’s unity vis-a-vis the Ten Sefirot may be likened to a ray of sun passing through a prism. On one side, we have a single ray of light, while, on the other side, we perceive a radiation of seven colors. The person sitting on the other side perceives this as if it were many lamps radiating many hues, while in reality it is one lamp. The multi-hued rainbow is a "distortion" created by the prism that the light passed through.

Let us be a little more specific in this illustration of "Ten" versus "One" as regards Divine interaction with the world.

Imagine a child who hugs his mother, beats up his brother and cheats on a test. For the layman each one of these behaviors is a separate event, which has its own rationale and dynamic. However, the professional psychologist looks at all these events and after analyzing them states, "These are all symptoms of one underlying problem. The child desires his mother’s love and attention. He therefore hugs her, hits his younger brother who is stealing away so much of her attention, and cheats on his test so that he will be showered with her love and attention for having done well." Thus a whole slew of events -- some of them entirely contradictory -- takes on a unified meaning.

This is true of our understanding of God’s interaction with mankind. We perceive such a wide variety of events, so overwhelmingly diffuse and so oddly contradictory.

From our side of the prism, each and every one of these events is disparate.

From our side of the prism, each and every one of these events is disparate. Yet we recognize them as being the work of One God, with one purpose, with unified plan of action for the world.

Thus the Ten Sefirot are the various ways we perceive God through His action within the world, while we firmly believe in the Unity of God.

The following is a literal translation of these ten modes. It is advised that not much be read into these terms, since most of them are highly metaphorical and their content bears little resemblance to their literal terms. We will explore their meaning in upcoming articles.

The Ten Sefirot are: