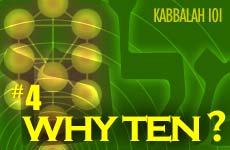 Ten Sefirot are not "ten" by chance -- their number helps us understand the design of the entire world.

The Sefirot are our human perceptions of God’s various interactions with the world, as discussed in "The Ten Sefirot."

What is the significance of the number "ten"?

In the Kabbalistic metaphor, numbers are not merely arithmetic notations. Numbers have a personality and are qualitatively meaningful. This idea is not so abstruse, for we live with it colloquially as well. We say that something happened only "once," that there are "two" sides to every story, that "three timed" offenders should be put away, that "dozens" came for an event, etc. etc.

Therefore, if there are "ten" emanations or Ten Sefirot, there must be a representation behind that number.

The number ten is significant because it is the arithmetic base.

The number ten is significant because it is the arithmetic base. This is usually explained as a result of our having ten fingers, the natural extent of primitive men’s digits. But this explanation begs the question: If there is a purposeful creation, and every facet of human life and activity are pre-planned, then the "ten" fingers are also part of that plan. It means that God intended the number system to be "ten." Why?

And even if the number system is built on ten bases, why is that the amount of Sefirot?

The Maharal, a 16th century mystic/philosopher offers an explanation. Although he really explains why God used "ten" utterances with which to create the world, the answer really fits the idea of Ten Sefirot, which are identical to the ten utterances.

God could have created the world with either one utterance ("sefira" in Hebrew), a few utterances (or sefirot), or ten utterances. Let us analyze the different possibilities.

If God had used one utterance, there is no way for us to analyze the world into component units.

If God had used one utterance, it would mean that there is no way for us to analyze the world into component units. For instance, take an ingenious businessman who acts intuitively and succeeds in business brilliantly. If we ask him to explain why he bought a certain company and what he gains from it, he will just stutter and say, "It just felt right." He really can’t explain it, for component terms such as "assets," "cash flow," and "infrastructure," are not part of his thinking and terminology. Similarly, a world that is totally encompassed in one description leaves us uncomprehending.

Let us then take a world created in two to nine commandments. This is a world with many component elements but no visible unifying underpinning. Thus, it may be compared to a person that does a lot of analytical investing but on an ad hoc basis; whenever opportunity presents itself he invests. We may understand particular moves of his but there is no overall picture to perceive.

Since God is One, this would be a false perception. A type of presentation where we can perceive bits and pieces, but not the connection between them, is pointless.

God created the world that allows itself to be analyzed in terms of components.

Thus, when we speak of "Ten" Sefirot, we mean to say that God created the world -- mankind, Torah, history and everything else -- that allows itself to be analyzed in terms of components. Not only ten components, but each of these ten has ten components, and so on.

On the other hand, no matter how many fractions we are capable of identifying, there is always a thread that allows us to understand how these various disparate elements converge to form the overriding unified picture, which is the "true" picture.

Therefore, when we study how God acts through the Ten Sefirot, we are looking at each detail with a double perspective: 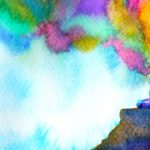 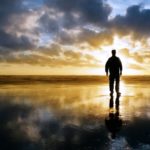