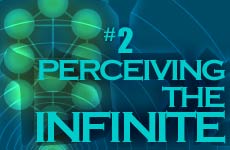 How can we get a glimpse of God? Kabbala reveals how the Infinite interacts with humanity.

The Kabbalah is about understanding God.

This brings us to a major paradox, because how can we -- who are finite, understand God, who is Infinite.

The Kabbalah describes God as Ein Sof, which in Hebrew means "without end."

Colloquially, of course, we are accustomed to use "infinite" whenever we refer to something “very, very big” or “uncountable.” But its real definition is “without borders” or "without parameters."

Just as when we physically grab something, we need edges/borders to hold onto, so too when we mentally grasp a concept, we need to perceive the boundaries of the idea as points of reference. Thus, when we define something we give it parameters, and thereby we are able to comprehend it.

A picture’s clarity depends on the sharpness of contrast of its boundaries. When I wish to describe a person, I point out the distinctions between him and others. If I say, “he is tall”, I really mean to say “he is taller than most others.”

God is termed Bal Tachlis -- He is not bound in any way.

This doesn't just mean that His powers are not limited in any way, but, more deeply, that we cannot contrast God with any experience known to humanity.

When a child asks to describe honey, we can point to the sweetness of sugar, the color of brown toast, and the texture of syrup, and tell him to imagine all three together.

But when a child asks for an explanation of the politics of workplace relationships, we have a difficult time finding an illustration, because emotional interactions have no real parallel in a child’s universe.

The same is true of God’s essence. No amount of comparison, illustration, or metaphor will bring His reality closer to our understanding. He is simply Ein Sof -- indefinable, period.

So what are we studying in Kabbalah?

Is the mind a useless tool when it comes to contact with God?

Are we adopting the view that the mind is a useless tool when it comes to contact with God? Or that communion with God is but a transcendental, emotional state of self-negation and acceptance?

No. It cannot be that the human mind -- our most important and God-like organ -- has no purpose in our attempt to communicate with our Creator.

The Realm of Understanding

The answer is that while God Himself is Ein Sof, He has created a place of interaction between Himself and humanity that is, for our sakes, bounded and defined. This place is called hanhaga -- and this is the realm within which we can make use of our understanding and knowledge.

But is this realm meaningless in the absolute sense? Has it been created just for the sake of keeping our minds occupied, since we can’t ever grasp the real thing?

Let us contrast two illustrations that will highlight our question and hopefully, provide an answer.

An adult is visiting the home of his friend, who has asked him to baby-sit. The adult has little in common with the child, yet must busy him somehow (let's say the television is broken.) He devises a game of marbles, and sits with the child and plays.

In doing so the adult has completely left the adult world and has entered the child’s world. Years later when the child will remember this incident, he might feel this as an example of the adult's kindness. But nothing in the game itself is a reflection of the adult’s values.

Now let us consider a second illustration. An adult sets up a school for children, where he will teach them dignity, responsibility and justice. But those are abstract concepts, meaningless to a child. Therefore, he makes a rule that white shirts and ties be worn at all times, that a certain amount of homework be the duty of the child to prepare, and that studying or the lack of, will be noted and publicized.

In the child’s mind these are concrete rules, and physical realities that the child can relate to. Yet underpinning the rules are abstract principles that the child is meant to learn. When the child grows up, he will perceive the inner values represented in these rules.

Commandments are finite and graspable. Yet their "soul," so to speak, is Divine.

This is what is at work in Divine hanhaga -- how we perceive God's interaction with the universe, which, of course, is contained in the rules and laws of the Torah.

To us the commandments of the Torah are rules and dictates. Being concrete and finite they are graspable. Yet their "soul," so to speak, is Divine.

Studying, obeying and understanding that hanhaga allows us to gradually develop some sense of the Divine will.

This is the subject matter of Kabbalah.

The Soul #1 - Who Needs It?
Deep Breaths
What Happened to the Truth?
The Japanese Everything Bagel Spice Recipe
Comments
MOST POPULAR IN Spirituality
Our privacy policy