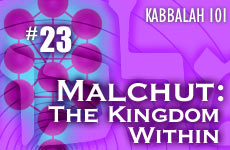 The last sefirah is the most important because God uses it to act through His creation.

The tenth and final sefirah is called "malchut" ("kingdom"), and in many ways this is the most important of the sefirot.

In order to understand what malchut is, we must refer back to the original verse that contains the ten sefirot: "To You, God, is greatness, strength, modesty, victory, awe, for all that is in heavens and earth; to You, God, is the kingdom." (1 Chronicles 29:11) We note that the description of malchut is an almost separate sentence and it restarts with the phrase, "to You, God, is..." Why this distinction?

Let us explain this by defining what malchut is.

When we think of a king or a kingdom, we imagine a dictator imposing his will on a helpless populace, draining them of their resources to be used for his own personal aggrandizement. Even if we picture him as a benevolent despot, he is at best an efficient bureaucrat.

When we speak of God and the concept of kingdom, we refer to a completely different model.

But when we speak of God and the concept of kingdom, we refer to a completely different model.

The model we have in mind is of a king who has a picture of good and bad, an ideology of right and wrong, and teaches the society around him those ideas and values. That society is then awakened to what is really right and structures itself and its institutions accordingly. When society has finished this process, it thereby amplifies and proclaims those values that the king had in his heart and mind.

The real teacher is the one who inspires.

While we do not live with kings and it might be difficult for us to picture this, we can definitely use the illustration of a good teacher. A teacher who allows the students to "do as they wish" is not a teacher at all. The students have not received anything from him.

On the other hand, a teacher who forces his students to do as he says has merely imposed external shackles on them. He has not really affected them in any way, and he is not a teacher. The real teacher is the one who inspires his students, so that they realize that their own real feelings and values are those espoused by their teacher.

This is malchut in the true sense. It is God's actions and attributes – not as expressed by God, but rather as human beings express them. It is as if God's actions have struck a resonant chord in us, and we thereby act in a similar manner.

The way we respond to God is often expressed by commentators as the contrast of two synonyms:

Thus we say in our prayers, "...and they accepted (God's) malchut [monarchial reign] willingly." Whereas the verse speaking about the relationship between God and the nations who have not yet accepted Him states, "For onto God is mamlacha [dictatorial rule] and He is ruler over the gentile nations." This means that God really wishes to evoke malchut in the world, but as far as those nations are concerned, He rules over them in a dictatorial way but does not bring about malchut in them.

But, if we are to define the sefirah of malchut correctly, we need to be clear that (unlike the other nine) it is an attribute of God which does not emanate from God directly. Rather it emanates from God's creation -- when that creation reflects and evinces God's glory from within itself.

This is the reason why it is stated separately in the verse -- "To You, God, is greatness, strength, modesty, victory, awe, for all that is in heavens and earth; to You, God, is the kingdom" -- for there is a great gap between the first nine sefirot and the last one. The first nine are a continuous stream of God's actions which strike humanity and affect us. When we then absorb these influences of God, find them in ourselves, change and thereby reflect God's glory – then we evince malchut.

Malchut is the goal that God had in mind when He created the world.

It is in this sense that this is the most important sefirah. In malchut, God does not act merely by Himself, but rather God acts through us.

Malchut is the goal that God had in mind when He created the world. All of the other sefirot are only the means to see malchut emerge.

In relating to the first nine sefirot, we are outside observers – admiring God's handiwork objectively. We may be impressed but somehow it never quite becomes an overwhelming experience. It is only when we hear the voice of God echoing from within us – which is malchut – that we are truly transformed.

Kabbala #6: The Sefirot and the Divine Plan

Holy Sparks #4: The Purpose of Creation

Holy Sparks #5: Why Not Antarctica?
The Japanese Everything Bagel Spice Recipe
How To Stock A Jewish Pantry Wherever You Live
Blessing on Chewing Gum
Comments
MOST POPULAR IN Spirituality
Our privacy policy