Kabbala #24: Keter: The Sefirah that Isn't 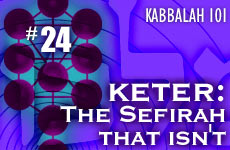 Keter manifests itself in the world as inexplicable "will" that goes beyond reason or cause and effect.

Before we close off the count of the sefirot, let us deal with a special sefirah that is not always counted together with the others: keter, "crown." On those occasions that we include it in the sefirot we omit the sefirah of da’at.

What is keter, and why isn't it normally included in the sefirot?

The real beginning is "will" or "desire."

For instance, a person plans to build a house. The building of the house starts with the mental image of a house, and progresses to its final realization. But the real root of the "idea" is the will and desire to be comfortable or to show off or whatever possible motivation. That will or desire is parallel to the keter sefirah.

Why then do we not count it with the rest of the sefirot?

The answer is because this trait is so fundamental and so deep that it is not really quantifiable. Thus, imagine that a person treats a fellow businessman to a lavish dinner. What’s his motivation? "To put the businessman in a good mood." And why is that? "So he signs the deal." Why? "So that I will make a handsome profit." Why? "So that I will be rich." Why? "Because that’s what I want!"

We can trace his reasons up until a certain point. At some point we get to a bedrock of "desire" or "wish" which does not translate into anything else. It cannot be analyzed in terms of cause and effect, but rather is an axiom of personality.

This corresponds to keter in the individual.

In higher spiritual realms, keter is the primary Divine will. It does not allow itself to be analyzed. And therefore, it is not really included in the count of the sefirot, for as we explained in the beginning, the sefirot are quantifiable tools of God that interlock in a chain of cause and effect. Being that keter is only a cause, it is not really a part of this system.

We can trace many steps of Divine Providence that have a cause and effect. But then we have to say that the root of all these reasons is "to bestow good upon His creatures." The question "Why does God want to do that?" may not be a valid question, because we are dealing with an axiomatic level of Divine Providence.

We have just explained that keter has no really discerning "cause." The same goes for its "effect."

There are two different kinds of "effects":

In the second case, we are sure there is an effect, but it is impossible to quantify and to directly observe it.

This is the nature of keter. It affects the other sefirot and produces them, but in an unquantifiable manner.

There is a profound reason why this is so.

The first group of sefirot -- the "rational" or "intellectual" sefirot -- are chochmah, binah, and da’at. Quantification, organization, direct cause and effect are all rooted in the rational process. Any type of activity that precedes these sefirot is outside the rational process. It cannot be quantified nor structured serially. Therefore, although it is definitely the sefirah of keter that brings about the following sefirot, it is impossible to pinpoint the process.

This is why this sefirah is called keter, which means a "crown." For all of the other sefirot are likened to the body which starts with the head and wends its way down into action. But the crown of a king lies above the head, and the connects the concept of "monarchy," which is abstract and intangible, with the tangible and concrete head of the king.

The crown "endows" the person with the power and prerogatives of royalty.

It is not a direct and mechanical connection as are the arms and legs to the body. Nor even a subtler connection, like the mind to the body. But, rather, the crown "endows" the person with the power and prerogatives of royalty. It is only after the king senses or is aware of his status that a linear process sets in. He asks himself, "What am I supposed to do as king? What are the necessary prerequisites to implementing my obligations?" And then he proceeds to implement them.

Therefore, keter is in some ways a sefirah and in some ways not. It definitely exists and is the source of all the sefirot, but ought not to really be counted amongst it.

We once quoted a verse, "and chochmah comes from nowhere." We explained then that chochmah is the first sefirah. Yet the Kabbalistic works also tell us that the "nowhere" is actually the sefirah of keter. It is a "nowhere" for we can never face it directly, quantify it or analyze it. But by seeing chochmah, we know that it was preceded by keter. Like a spring bursting out of the earth, the first drop of visible water is chochmah, but we always know that there is a source -- forever unseen -- from whence this originated. And that source is keter.

From the Desert to the Holy Land - Current Events and Kabbalah: Part 2

Mystical Roots of Tu B'Av
Were Adam and Eve Jewish?
How I Learned to Love the Multiverse
10 Big Jewish Inventions
Comments