40 Days for a Stranger 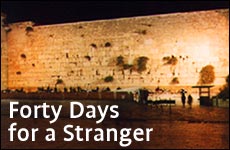 Every day, I pour out my heart, praying that she should get married.

They say it's 155 stairs, but to be honest, I've never counted. I climb them every day, but I'm too busy envisioning the engagement party, dancing at the wedding, and the Sheva Brachos festivities for seven days following the wedding. Am I dreaming about my own chuppah? No. I'm doing “40 Days” for a woman I've never met.

Living in Jerusalem, as a single woman, I am very familiar with the idea of “40 Days.” You see, mystical Jewish tradition says that a person who goes to the Western Wall for 40 consecutive days to pray for one thing, will be granted that thing.

The origin of this idea -- praying 40 consecutive days -- is Moses, who spent 40 days on Mount Sinai, asking forgiveness for the Jewish people for the sin of the Golden Calf. Rabbi Yisrael Yaakov Fischer, one of the leading sages of the last generation, established that if these 40 days were prayed specifically at the Western Wall, it was a special segula -- an auspicious omen, like a recipe for success.

How does this work? God sends us personal challenges that encourage us to self-reflection leading to teshuva. By undergoing 40 intense days of prayer, the teshuva process can be sped up.

This happened to a friend of mine. She was not ready to get married, when her then-future husband began the 40-day trek to the Wall. He had been dating for five years and was about to be black-listed from the matchmakers' lists for his pickiness! During the course of his 40 days, his then future-wife's life changed dramatically, and she was forced to confront test situations. By the time his 40 days were completed, her life had fast-forwarded and she was ready to marry.

They met about a week later, and were married within three months! They now live happily together, with their adorable baby boy in the Old City of Jerusalem.

Another woman I know had been battling it out on the dating scene in Canada for years. There was never a good reason why she wasn't married. Beautiful, bright, loving and independent, no one could figure out why she was still available. Then her friends ganged up on her and convinced her to do the 40 days in Jerusalem. She took a leave of absence from work and hopped on a plane. In addition to the great leaps that she made in her Judaism by living in Jerusalem, she crowned off her fortieth and final day with a visit from someone she had previously dated. Within a few days, he proposed and she accepted. They now live a beautiful life together with their baby girl in Toronto.

Water Through a Pipe

A feature of the 40-day segula is that you can pray on behalf of someone else. I heard the story of one man who secretly did the 40 Days for the brother of a friend who had no children. Talk about an act of kindness! The only thing he knew about them was their full names and their pain. Years later, as an older man with a family of his own, his daughter became happily engaged. Hearing the full name of his future son-in-law's parents, a familiar walk to the Wall came to mind. (After 40 days of praying for someone, their names leave quite an impression!)

Sure enough, the man who was set to marry his daughter was none other than the child of the “childless” couple whom he had prayed for, some 25 years earlier. The miracle was too great to contain, and the once-anonymous act of kindness was revealed.

So you might wonder why I am going to the Wall for 40 days for a girl I've never met. Of course, if the woman were doing the 40 days for herself, that would be the best benefit. But because she can't make it, I am acting as her agent, and she is using this time -- from the other side of the world -- to pray for her soul mate as well.

Like water through a pipe, the blessing runs through the person praying on the way to its destination.

On the other hand, there is a deep mystical force operating here. The Talmud (Baba Kama 92a) says that one who prays for another will be granted that thing first. Just like water running through a pipe, the person praying becomes the pipe through which the blessing flows to the other person. The blessing first runs through the one praying on the way to its destination.

We see in the Torah, that when Abraham prayed for Avimelech to be blessed with children, immediately thereafter his wife Sarah conceived and bore a son Isaac (Genesis 21:1-2). Through Abraham feeling Avimelech's pain and having compassion on him, God responded to Abraham's pain.

In a world that focuses so much on the "I" -- I want, I need, etc, it is so easy to get caught up in one's own needs and forget the pain and needs of others.

So I've chosen to be this woman's proxy. First, to have the privilege to be the one going to pray for her, since she does not live in Israel and cannot go there herself. And second, because I know the pain of not yet being married. And, if I can truly move myself aside and feel her pain before mine, I can bring down more blessing than either of us praying for ourselves.

Does that mean I'm going to get engaged before her? Not necessarily. Perhaps my soul mate and I need more time. Only God knows.

But one thing I do know: I cannot lose. A key part of the 40 days is the chance to work on oneself and look within to areas which one needs to improve. My daily trips allow me time to isolate my thoughts, so that my sole focus is on the woman for whom I am praying. I have the privilege to be able to work on this area, because “focus” is an issue that I generally need to work on. So although my thoughts and prayers are exclusively for her, the focus is just what I need for me.

And I can honestly say I know that I have gotten as much out of this as I have given.

Prayer to the Heavens

So every day, as I walk down the stairs to the Wall, I envision the woman's engagement -- the dancing, the smiles, the “Mazal Tov's.” I literally feel her joy as she dances and nervously nibbles on the food.

At the Wall, I sing to myself the traditional Jewish wedding song, based on Jeremiah ch. 33:

As I say a special prayer on behalf of the woman for whom I am davening. I feel her pain of being single, and the incredible gift it will be when she gets married, to finally find her true soul mate. As I walk backward away from the Wall, I envision her Hebrew name sinking into the wall, and my prayer reaching the heavens to bring her heart's desire.

On the way up the stairs, I sing to myself the special Sheva Brachos prayers and envision her new husband by her side. And then finally at the top of the steps, I take a moment to stop and think of her one last time before I resume my own life and my thoughts are free once again to be mine.

Did God Throw the NBA Finals?

How to Pray For Something You Really Want
Mind Over Milkshakes
Love the Convert
In the Shadow of David and Goliath
Comments
MOST POPULAR IN Spirituality
Our privacy policy
Aish.com Is Looking for Great Writers