Stranger on the Hospital Stairs 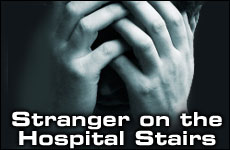 As the Jewish nation defends its very existence, grief and pain surround us. It all stems from one source.

If I live one thousand years, I don't think I'll ever forget that scene.

It was a balmy Shabbos morning. My grandmother was in the hospital, recovering from surgery. Young and single, I was able to make the 45 minute walk to visit her. I entered the dim lobby of the hospital, and began the walk up the flights of steps to my grandmother's ward.

He was seated on the stairs just outside the entrance to the maternity ward. A young, Yerushalmi hassid, dressed in a regal gold and white caftan, white socks tucked into black knickers. He was someone whose path I would normally never cross. Here, in this building of life and death, he was hunched over, head between his knees, sobbing with an intensity of agony I had never before witnessed. It came from the depths of his being, the cry of a misery that was too great to bear. It was a sound so laden with pain that I felt my insides tearing.

There was someone with him, a young teenager, probably a brother. His companion sat beside him, silent in the face of his grief. He showed his compassion with a hand laid across the other's shoulder. But it was clear there was little that he, or anyone, could do.

I stood there on the stairwell, unwilling to trespass into the pain of a stranger. What could have happened, I thought, that would cause someone such grief in this one island of happiness in the hospital? Had he lost a baby, the dreams of nine months crushed in a moment? Or was it his wife who had succumbed in the dangerous moments of birth? His tears told me that whatever had just transpired, it had changed him, and his life, irrevocably.

So why do I think of this heartbroken stranger now, a decade later? Because T'isha B'av, the day we mourn the destruction of the two Temples and all that they meant, is approaching.

The Midrash in Lamentations relates that in the neighborhood of the great sage Rabban Gamliel lived a woman whose son had died. Every night she would weep profusely over her loss. Rabban Gamliel would hear her, and he would shed bitter tears over the destruction of the Temples.

When our exile will end, so will all sorrow.

How does one set of tears connect with the other? Rabbi Mordechai Gifter, a great man who passed away several years ago, explained that every tragedy is rooted in the fact that the world has not yet reached its ultimate purpose. When our exile will end, so will all sorrow. Rabban Gamliel heard the woman sob over the death of her son, but he understood that the root of her suffering was the destruction of the Temple. He then cried over its loss.

This is a sobering thought.

We are barraged with stories of horrific grief. Of young widows left with tiny orphans. Of children battling for their lives. Of soldiers being held in captivity. Of marriages unraveling and parents estranged from their offspring. All this heartbreak has one root, one source -- the fact that we are still in exile.

Merely thinking of what we lost when the Temple disappeared in flames is difficult enough. No longer do we bask in a deeply intimate relationship with our Creator, in which we saw His presence with utter clarity. There were ten miracles which took place on a daily basis in the Temple, ten ways God would tell us, "I am here, my child, right with you."

In the times of the first Temple, we were surrounded with prophets. No gut-wrenching nights of lost sleep trying to come to "the right decision," no agonizing over paths not taken. One could discover God's will and the course of action which would lead to ultimate fulfillment with relative ease. At the close of the services on Yom Kippur, the nation would look at the scarlet thread they had tied to the Temple door -- if it had turned snow white, they knew, with a certainty we cannot even fathom, that their sins had been forgiven.

The Temple was the pipeline which connected us directly to all blessing from above. It gave us material benefit -- rain, health, prosperity. But it gave us much more; it gave us a constant exposure to the greatness of God's presence. It was a tangible manifestation of our relationship with Him. It was a vigorous roar of truth, so different from the whispers we strain to hear today.

The loss of all that is reason enough to mourn.

But to compound that loss, there is the reality of every loss we have ever sustained, both individually and collectively, since the day we entered exile. Every blood libel and pogrom, the Inquisition and the Holocaust -- all rooted in one source.

Sorrow surrounds us during these days, as Israel is again fighting for her very existence. There are soldiers going off to a battle from which they will never return. Others are trapped in enemy hands, fate unknown. There are young brides widowed and children living in constant fear. The death and the destruction, the wounds and the losses are all are rooted in one source.

The pain is unbearable.

But it is that very shattering of a heart that can contain no more anguish which is the source of our salvation. For only when it reaches that point, only when we realize how broken we actually are, can we take the steps necessary to start becoming whole once again.

By mourning, we actually bring closer the day when the Temple will stand once again in Jerusalem. The day the world will reach its ultimate purpose. The day when you, I, and the heartbroken stranger, will enter a glorious period of endless revelation.

Filling the Crevices of the Wall

Tisha B'Av: The Root of Destruction

Word by Word: Rebuilding Together During the 9 Days

All for One
Deep Breaths
What Happened to the Truth?
The Japanese Everything Bagel Spice Recipe
Comments
MOST POPULAR IN Spirituality
Our privacy policy