Praying for the Payoff 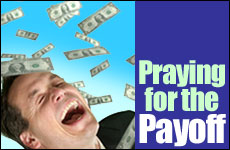 Can giving money away really help your bottom line?

After 22 years I left my job as a fundraiser for Jewish education and embarked on a career on Wall Street. Hoping to continue making a difference in the Jewish world, I made a commitment to give 20% of my net income to charity, versus the 10% required by Jewish law. I told my friends, "I am not changing careers to earn a million dollars a year but to give away a million dollars a year."

In my fund-raising work I always had big goals. I told people that everything worth doing had to have a BHAG (a big hairy audacious goal). Well, going off to Wall Street and stating boldly that I planned to give away a million a year was certainly audacious. Especially since at the time, I had no income and no savings!

Using a home equity line of credit to cover start-up costs and living expenses, I figured I had ten months before I really needed to make money. Little did I know.

When I started out, I plunged in optimistically and experienced an extremely chaotic first nine months. Meanwhile, I was quickly depleting my bank account.

Then I got some good advice from a close friend who was raising money to feed the poor of Israel over Passover. He told me that according to the Talmud, the cries of the poor of Israel pierce through the heavens and are heard by the Almighty, and those who answer their cry for help down here on earth get special credit up above.

If I was to succeed, I knew I needed lots of credit, and I figured helping the poor of Israel was a great way to get it

If I was to succeed, I knew I needed lots of credit, and I figured helping the poor of Israel was a great way to get it. I knew that the Zilberman family in the Old City of Jerusalem administers a tzedakah fund to help poor families with Shabbat expenses. I found out that they had a list of some 50 families that desperately needed food for Passover. I made a donation to this cause – the first of my charitable donations as a Wall Streeter.

In return, I asked for the recipients to pray and pierce the heavens on my behalf. I wanted them to be my flag bearers, leading my charge down that very busy highway upon which prayers travel to upper realms.

But six months later, the prayers must still have been stuck in traffic, because Rosh Hashana was around the corner and I was quickly using up what I had borrowed from the bank. I had made some money through various small deals, but all of that got swallowed up in start-up costs. Nevertheless, I owed 20% of what I did make to charity as I had promised.

It was a very, very scary moment when I wrote out that first check for 20%. Rosh Hashana eve, I wrote another check to help the poor of Jerusalem over Sukkot and sent that to the Zilbermans to dispense. This donation I sent with special instructions that I needed the poor to use megaphones, or whatever else they could muster, when it came to storming the heavens.

Self-doubts and second-guessing set in. "Perhaps it made more sense to just give 10% like Jewish law requires. Could I renege on my promise of 20%?" I thought that would be wrong. After all, the Almighty runs the world, and He decides how much money we all make. I couldn't possibly lose by doing the right thing.

But then again, the right thing is to give 10% to tzedakah, not 20%. Only the wealthy are encouraged to give more than 10%, and even they are not required to do so. And I wasn't wealthy by any means -- I was in debt!

But the Talmud says that when you give even the minimum amount the Almighty will give it back to you a hundredfold. It says that this is the only mitzvah where you can test God -- give it away and you will witness God paying you back. That would imply that the more you give the greater the return.

I had this running dialogue in my head for days.

I went back and forth, first thinking I was doing the right thing and then thinking I was a fool. I lay awake at night trying to hear the cries of the poor storming the heavens and wondering if next year I would be one of them, waiting for my care package and crying out to the heavens on behalf of my benefactor.

In the end, my believing side -- the part of me that trusts in God -- won out. I said: "This is the Almighty's will. You can't lose out if you do the right thing."

This is the only mitzvah where you can test God -- give it away and you will witness God paying you back.

In retrospect I see that if success had come too quickly it would not have been healthy for me. I needed to feel a lack; I needed to turn to God and be clear where my help, wealth and sustenance were coming from.

Three weeks after Rosh Hashana, the strangest thing happened to me. A business deal -- in which I was only tangentially involved -- closed. I had been putting my efforts into other matters and really not counting on this to amount to anything. But, out of nowhere, and certainly through none of my doing, the deal went through and I received a substantial commission.

If it had happened any closer to Rosh Hashana, they may have had to bring out the defibrillator to revive me from the shock. Get this: I had borrowed the money from the bank in order to give it to charity and received it back (more than five times the charitable amount) only three weeks later! Any hedge fund manager would pay dearly for such leverage.

The power of tzedakah could not have been demonstrated any more clearly to me. I saw God's message in this gift. He could have delivered it in any number of ways, but He sent it in such an obvious way so I would see that wealth did not come from my efforts. Over the past nine months, I had spent at most 15 hours on this deal out of total of more than 2,000 work hours, so less than 1% of my effort had generated 60% of my income!

This concept, our efforts versus God's will, in many ways, is very easy to hear yet hard to live with. We have to try as hard as we can, but we can't be misled into thinking that the outcome is our doing. Our job in life is to realize that God really does run the world, and He decides how to respond to our effort. Yes, we must try -- we cannot just loll around expecting miracles. We can't say we want to win the lottery and not even buy a ticket. Yet all we need to do is buy one lottery ticket and not hundreds. All that counts is doing His will, because that's all there is anyway. It is that mindset that will open the door to the ultimate success.

The FedEx Guide to Self-Forgiveness

Is Cognitive Behavioral Therapy Like Prayer?
It Takes A Lot Of Faith To Be An Atheist
How Instagram Brought Back This Nostalgic Soup
What Makes Eli Run?
Comments
MOST POPULAR IN Spirituality
Our privacy policy