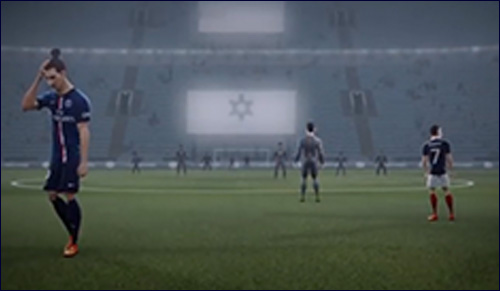 Animated soccer stars compete against evil clones who wear uniforms bearing a logo that looks like the Star of David.

The Zionist Organization of America (ZOA) has called out Nike for an animated promotional video posted online before the World Cup in Brazil, urging leaders of the shoe company to have the ad removed because its content is anti-Semitic.

In the video, titled "The Last Game," animated international soccer stars compete against evil clones who wear uniforms bearing a logo that looks like the Jewish Star of David.

Additionally, the background of the video includes images of a white rectangle with the same Star-of-David-like image in the center – resembling the Israeli flag, but without the blue stripes.

“Some of the animated soccer stars in the video – i.e., the ‘good guys’ – are wearing shirts with a ‘Fly Emirates’ logo and a ‘Qatar Airways’ logo, which must mean that these Arab airlines co-sponsored the video. It is no secret that the United Arab Emirates and Qatar have a deeply troubling history of anti-Semitism and hostility to Israel,” ZOA leaders wrote in a letter to Nike Chairman Philip H. Knight and President & CEO Mark Parker.

Nike has dismissed accusations that the video is anti-Semitic, despite complaints from ZOA, the Israeli Knesset, the World Zionist Organization, and general viewers. The company claims that the controversial logos in the ad were intended to represent a soccer ball.

Watch the video and tell us in the comment section below if you think the video is anti-Semitic.

The Tragedy of Million Dollar Baby

Star Trek and God
Lessons from the Book of Jonah
Where Are We? The Body, Brain, Soul Problem
Dr. Sheila Nazarian’s Escape from Iran
Comments
MOST POPULAR IN Current Issues
Our privacy policy
Aish.com Is Looking for Great Writers