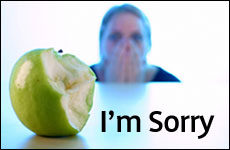 There can be no peace without apology.

In 2005, teenager Ryan Cushing threw a 20-pound frozen turkey from a speeding car, as part of a prank. The ice-hard poultry crashed through the windshield of a bypassing car, crushing the face of Victoria Ruvolo, a woman from Long Island. It took numerous painful surgeries to rebuild her face. In the courtroom, Cushing cried uncontrollably as he apologized to Ruvolo. He kept repeating "I'm so sorry," to his victim.

Ruvolo, instead of seeking retribution, actually comforted Cushing in the courtroom; the prosecutor said that he had never seen such a forgiving victim. Cushing's sentence was six months in jail; it could very well have been 25 years had Ruvolo not shown compassion and forgiveness, asking the judge to exercise leniency.

Judaism emphasizes the importance of teshuva (repentance), from the Hebrew root meaning "return." But what is perhaps often overlooked is that the return it envisions is a two-way street. An apology does not count as repentance unless it is sincere, heartfelt, and has the ability to lead to genuine forgiveness. Teshuva is about renewing a relationship that has been sundered, not simply curing one party's guilt. It is about curing a hurt that has caused a rift between parent and child, husband and wife, brother and sister, friend and friend. As much as is possible, it returns things to the way they used to be.

A true apology, however, indicates strength.

With some schools of psychology, apologies today are not so in vogue. They have tried to remove "guilt" from our lexicon. "Suppress it!" they say. But in truth, when we refuse to admit, the regret simply festers inside.

Judaism emphasizes "healthy guilt" -- where you maintain the sense that you're a good person, while acknowledging that in this case you used bad judgment and made a mistake.

Many people do not apologize because they are afraid of being seen as weak. A true apology, however, indicates strength. An apology is a magnanimous act, for it involves taking a bold and difficult step, perhaps at great emotional cost. A sincere apology allows both parties to move on, stronger than they would otherwise have been.

A proper apology must show both regret and remorse. Remorse without an apology may mean there is no opportunity for healing. Apology without remorse is ineffective.

Often, regret derives from the fact that one was caught doing something wrong. Had the individual not been caught, s/he would not feel sorry. Whereas remorse is about being truly sorry for causing another person pain, and an understanding that the act was morally wrong. It has to demonstrate a commitment to genuine change. Which, after all, is what teshuva is really about.

Maimonides, in his classic work, Mishneh Torah, describes the steps for doing teshuva: there has to be admission and regret over the misdeed. The individual must confess the sin to God, regret it, and resolve to never do it again. If someone has hurt another person physically or financially, the offender must pay the victim. The perpetrator must also ask the victim for forgiveness.

Only when the aggrieved party receives such an apology -- that the perpetrator both regrets it and feels it was wrong -- will there be the possibility of true forgiveness.

Further, the apology has to be contrite, not accompanied by a litany of excuses. We're all familiar with conditional apologies such as: "If anyone has been hurt by my actions, I am sorry," or "I am sorry you feel this way," or "I didn't do it on purpose. I had a hard day and I didn't realize what I was doing. And why are you so sensitive about this, anyway!?" These do not indicate genuine remorse and therefore do not truly heal.

Most of us do not feel that Mel Gibson's apology for his anti-Semitic tirade was authentic, because we imagine that he could easily do it again.

The professional world today is increasingly recognizing the importance of apologies. Legal scholars argue that sincere penitence is superior to punishment as a way of resolving mutual grievances, and that many legal disputes arise in the first place only because there had not been an apology. Medical schools now teach future doctors to apologize when they make a mistake, and a growing number of businesses are apologizing for manufacturing defective products or polluting the environment.

Apologies are important not only in interpersonal relationships, but in global relations. Turkey cannot build a normal relationship with neighboring Armenia until it acknowledges Turkey's role in the genocide of one million Armenians between 1914 and 1923. Similarly, the failure of the Japanese government to fully apologize for crimes committed during World War II -- against Korea and China in particular -- keeps those nations wary of Japan.

On the other hand, the late Pope John Paul II effected a revolutionary change in Catholic-Jewish relations when he visited Israel in March 2000. He stood at the Western Wall and apologized for centuries of Catholic anti-Semitism. "We are deeply saddened by the behavior of those who in the course of history have caused these children of Yours [the Jewish people] to suffer," the pope stated. "For the role that each one of us has had, with his behavior, in these evils, contributing to a disfigurement of the face of the Church, we humbly ask forgiveness."

One must try to apologize three times.

On one level, the aggrieved party has to cooperate to allow the peace to happen. If someone apologizes, accept it. Don't leave it lingering over their head. Give them the freedom to move on. Actually, in Jewish law, one must try to apologize three times. After that, if the (sincere) apology is not accepted, it now becomes the other person's problem.

Learning to forgive is a technique to elevate one's long-term level of happiness. Research indicates that many mental health problems, such as stress and even physical ailments, result from anger and the obsession with "getting even" for an offense.

So today, try to think of someone you may have wronged. Even if the other party is partly to blame, give him or her a call. "Who is mighty?" asks the Midrash. "One who converts an enemy into a friend." It takes great courage to say, "I am sorry for what I did and I regret it. Please forgive me."

This Yom Kippur, Enter a Radically Different Place
The 21st President of the United States: Failure or Inspiration?
Hiding Their Jewishness
The Jewish Pope: Following the Questions Home
Comments