How to Say You're Sorry 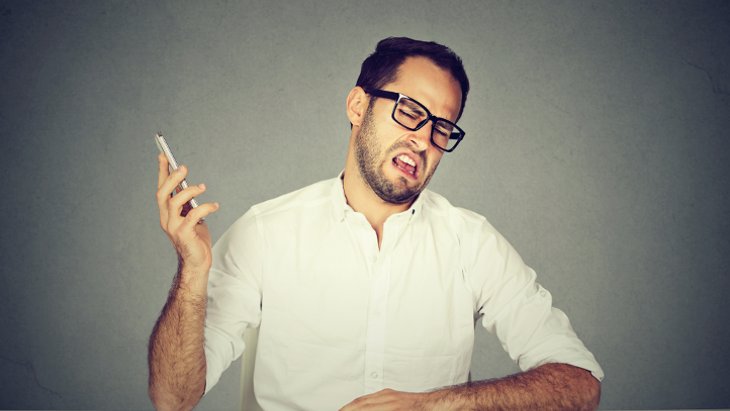 On a recent flight, I settled into my seat tired and hungry. As one of those increasingly rare people who don’t mind airplane food, I eagerly awaited my meal. When the flight attendant approached, I was disappointed to learn that they didn’t have my kosher meal, but I was even more disappointed by how flippant she was in informing me. While I didn’t raise my voice or become aggressive, I must admit that I felt my blood pressure rise and my muscles tense when I somewhat forcefully challenged how was it possible that I ordered the special meal in advance, paid for it as part of my flight, and they were failing to provide it with no remorse or recourse.

She gave me a halfhearted “sorry” that sounded more like, “oh well, too bad” and I began to stew in my seat and mentally compose my email complaint to the airline.

A short time later, another flight attendant approached to explain what had happened. Someone else had ordered a gluten-free meal and my meal had been served to them by accident. She said it was entirely the crew’s fault, took full responsibility, apologized and continued by telling me she could cobble together kosher products from other meals so that I would have something to eat.

I immediately felt my demeanor relax and now it was me being dismissive of the mistake and telling her it was no big deal, these things happen, don’t worry about it, I could do with skipping a meal anyway. I deleted the email I had mentally drafted, my body relaxed, and this meaningless setback was quickly put in perspective.

As I sat there reflecting (plane rides are great for that), it occurred to me that nothing about my growling stomach and missing meal had changed, and yet everything about how I felt about it was now totally different; not because they found my meal, but because I found them to now be sincerely sorry.

Most people just want to hear someone take responsibility and offer a sincere apology.

A study published in the Journal of Patient Safety and Risk Management found that hospital staff and doctors willing to discuss, apologize for, and resolve adverse medical events through a “collaborative communication resolution program” experienced a significant decrease in the filing of legal claims, defense costs, liability costs, and time required to close cases. The study found that 43% of the cases in which a medical error had occurred were resolved with a simple apology.

Even with mistakes much more consequential than an airplane meal, many or most people just want to hear someone take responsibility and offer a sincere apology. 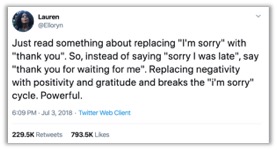 The tweet went viral with close to 800,000 liking it and 230,000 retweeting it. It clearly resonated, but that is not necessarily a good sign. Contrary to this misguided sentiment, taking responsibility and apologizing are not about positivity or negativity. They are not about avoiding feeling bad. An apology is all about taking responsibility, no matter how it makes one feel.

The Shulchan Aruch (o.c. 606:1) tells us that if we have hurt or injured someone, in deed or with words, we must take responsibility and apologize. If we aren’t forgiven at first, we must come back a second and even a third time, no matter how negative it feels, and request forgiveness again and again. This law applies all year long and to whenever we may have hurt someone, intentionally or accidentally.

Research published in the May 2016 issue of the Journal of Negotiation and Conflict Management Research found that while there are six elements to an effective apology, the most important component is an acknowledgment of responsibility. “Thank you for waiting,” is simply not the same as “I am sorry that I was late and that I kept you waiting.”

Last week, Antonio Brown apologized to the Patriots and team owner Robert Kraft for the negative attention he brought during his brief time with the team. The four-time All-Pro receiver wrote on Instagram: ”All I wanted to be was an asset to the organization; sorry for the bad media and the drama!”

Brown didn’t say, “Thank you for tolerating the negative attention I brought to the team.” He communicated the key sentiment: I take responsibility, I was wrong, I am sorry.

Dr. John Gottman came to the same conclusion about marriage. He found that instead of trying to change your spouse, there are four things you can do to change your relationship for the better, the most important being taking responsibility. He writes, “We are responsible for how our words and actions make our partner feel. Apologize to your partner by taking responsibility for the problem, even just a small piece, and this will validate their feelings, promote forgiveness, and allow you both to move on.” He concludes, “Instead of trying to change your partner, be the change you wish to see in your relationship.”

God didn’t punish Adam and Eve when they made the mistake of eating from the tree of knowledge. He held them accountable after He called out “Ayeka -- where are you?”, and they failed to use the opportunity to take responsibility.

In contrast, Rav Chaim Shmulevitz (Sichos Mussar #15) points out that Yehudah was awarded with monarchy specifically because when challenged, he took responsibility for his transgression and said, “I admit that she is more righteous than I”. Notice that Yehudah doesn’t say, “Thank you, Tamar, for letting me falsely accuse you, shame you, and almost cost you your life.” Leadership demands the willingness to say: She was correct, I was wrong, and for that I am responsible.

Flight attendants, medical professionals and every one of us will inevitably be challenged with the call of “Ayeka? -- Where are you?” when we have kept someone waiting, given away their meal, made a mistake with their care, or with something else.

Whether we fail to answer that call because it feels negative, or we positively take responsibility and accountability, will say everything about us.

The Dangers of Being a People Pleaser

Fighting the War with Our Mouths
What Makes Eli Run?
The Tyranny of Materialism
Science Enters the Mysterious Inner World of Consciousness
Comments
MOST POPULAR IN Spirituality
Our privacy policy