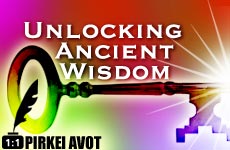 The first in a series on ethical lessons from a widely studied section of Talmudic literature.

They said three things: Be deliberate in judgement, stand up many students, and make a fence for the Torah.

The burning question among American Jews today is "How do we insure that our grandchildren will be Jewish?" The question isn't a new one. Our Mishnah addresses this very issue. Yet the question presupposes an even deeper one: Why should we care?

In previous generations, Jews faced the threat of physical annihilation. Today, we confront the more subtle threat of absorption into the larger community. It's not as if your intermarried cousins have suddenly been zapped into oblivion; they merely won't be Jews. And if they're perfectly happy, comfortable middle-class Americans, how can we call their fate a "tragedy?" After all, they're living the American Dream!

Before getting upset about assimilation, know why it's important for the Jewish nation to survive.

Before we can get upset about assimilation, we need to understand why it's important for the Jewish nation to survive, and why we should want to be part of it. Don't think it's about nationalism, or ethnocentrism, racial pride or the unspoken sentiment that "the world would fall apart" without our contributions to science, medicine, charitable works, the arts, or entertainment. The world can do just fine without bagels.

Pirkei Avot, generally translated as "Chapters of the Fathers" can also be translated as "Chapters of Fundamental Principles." Pirkei Avot is the wisdom of Torah distilled, summarized, organized and laid open for us to absorb and integrate. By learning Avot, we come to understand how to look at the world through Jewish eyes. And we begin to understand why the Jews need to study, live and teach the world Torah wisdom.

‘Moses Received The Torah At Sinai’

The first step in understanding an idea and communicating it is to know its source. Demand to know: What is it based on? Who says that it's true?

We live in an information age. We are bombarded by a constant flow of information, images, and ideas aimed at shaping how we see the world. Be a prepared listener. Know the agenda and position of the speaker, and you'll understand how to listen to what he has to say.

The Jewish idea of learning is not about the accumulation of information and factoids.

Our Mishnah opens by telling us the source and transmission of all Torah wisdom. The ethics, philosophy and moral standards are not the products of human minds. They are not merely the pithy sayings of wise men who preceded us. The Mishnah reminds us that the ultimate source for all decency and morality is God and it can't exist in His absence. This Torah was received by Moses at Sinai, and handed down generation by generation ― from Moses unto you.

But Moses didn't just hear the Torah; he accepted it. He studied it, he experienced it, he adapted himself to it and grew to fulfill it. The Torah concept of learning is not about the accumulation of information and factoids. It is not about oohs and ahhs of elegant philosophical constructs. It's about hearing an idea, making it part of yourself, and changing your very nature to match your understanding of Truth.

"Mesorah" implies handing something over in trust. We can't alter it or twist it to match our needs. We are responsible to hand it over exactly as it was received.

Our Mishnah hints at two transitions where the transmission of Torah was potentially at risk. When Moses handed responsibility for Torah to Joshua, it passed from one who received it directly from the Almighty, to one who had merely heard it at the feet of a teacher. Then, when the Prophets handed it down to the members of the Great Assembly, authority passed from those who directly experienced God's presence through prophecy, to those who could only experience it through learning His words.

Our Mishnah uses the word "Mesorah" at each of these junctures to reassure us that the Torah passed true and pure from teacher to student ― across these two great divides in our experience of God.

The second step in understanding and teaching an idea is to identify its essence.

Why do organizations have mission statements? Because if you can't summarize the concept, then you don't really understand it. When you understand it, you can articulate it clearly, directly and to the point. Every good salesperson knows how to describe his product with two or three key phrases. A business plan which can't be summed up in a sentence or two is an idea which hasn't been fully considered.

The members of the Great Assembly said much more than three things, but they were able to distill the essence of their message into three fundamental principles. The Mishnah teaches us the bottom line for passing Torah on:

‘Be Deliberate In Judgment’

What makes you a human being? It is your ability to choose between your drives (what you "feel" like doing) and your will (what you know you "should" do.) It is one of the great slanders of human history that people are slaves to either nature or nurture. Although we are clearly influenced and constrained by your environment, we are given full ability to choose how to act and who to become.

Though influenced by environment, we have full ability to choose who we want to become.

But how do you choose? Do you live your life willy-nilly, bouncing from one ill-conceived action to another? Do you go just ride along with the current fashion? Or do you think? Our Mishnah reminds us that we are obligated to think, to live a considered life. Be deliberate.

Many live life randomly. We react to circumstances as they occur and go with the flow. But choices are too critical to be thrown off without thought. Our Mishnah suggests a disciplined, ordered approach to decisions. Recognize what the issues are, categorize them, prioritize them, weigh them and decide. This doesn't mean we should be paralyzed with indecision. The Mishnah wants us to decide based on reason, thought and consideration. But it wants us to decide. Be proactive. Don't just blow in the wind. For as the song says, "If you choose not to decide, you still have made a choice."

‘Stand Up Many Students’

Judaism is not a cult. We are not looking for brain-dead automatons capable of following orders. Neither are we looking for gurus who can bend and shape pliant masses to their will. The goal of a Torah teacher is not to create beautiful syllogisms or abstract intellectual constructs.

The goal of Torah is to communicate a fundamental understanding of our nature, purpose, obligations and opportunities. The ultimate purpose of learning is to make you independent and give you the tools needed to fulfill your mission in the world. A true teacher aspires to clearly communicate his ideas, principals and goals ― and then get out of the students' way to enable them to function on their own.

Your obligation as you learn, is to spread it around. If you gain clarity on an issue, don't leave others in the dark. Teach it to them, and stand them up to teach others.

To ensure the success of any endeavor or system, it is necessary to insulate against failure. You want to minimize the likelihood of failure, and minimize the damage failure causes. Construct a safety net.

Rabbi Moses Chaim Lutzatto (The Ramchal) taught in his classic work, "The Way of God," that God created the world in order to bestow Good, and Man was created to be the recipient of that Good. A "good" is only truly good if it is earned, and not if one is merely accidentally associated with it. After all, how much pleasure do you take in being praised publicly for something someone else did?

If all good was immediately rewarded and all negative immediately punished, only a fool would ever choose negative.

Yet if you choose Good only because of the reward you will receive, then the choice is really a "financial" one rather than a moral one. If all good acts were rewarded with chocolate and all negative acts punished with electric shocks, then only a fool or a determined rebel would ever choose the negative. Your choice really wouldn't be a choice, and there would be no real "earning" of that reward.

Therefore it is logically necessary to create a world in which there is a cost to doing "good" and a benefit to doing "evil." If I bonk you on the head and take your wallet, I may damage my soul but I do have your money. Whereas, if I give money to feed the poor, I can't indulge my own pleasures as fully, but I have lifted myself and bettered my world. In this way, you have the opportunity to weigh the reward of doing good against its cost, and the cost of doing evil against its benefit. That’s a real choice.

Mitzvot address situations where we have a physical drive or hunger to act one way, and a moral, ethical commandment to act in another. They create a conflict between "desire" and "will" ― and gives us an opportunity to choose. Each time we decide, we either lift or lower ourselves. The choice is ours.

The Sages understood this struggle, and created fences to assist us in fulfilling our potential. Fences are rabbinic laws, customs and decrees that expand the definitions of Torah Laws. One key role of a fence is to limit the likelihood of failures that would damage your soul. By creating a boundary before the point of actual damage, the Sages ensure that even an error bringing you across that line will still leave you short of the point of true damage.

If you've ever seen the yellow warning signs on a twisting mountain road, you can be sure that the posted speed limit is lower than the speed at which you will actually go flying into the abyss. Plus the highway engineers erect barriers to catch those who push the limit too far.

Another critical role of rabbinic "fences" is to maximize our opportunities to choose. If we recognize that each mitzvah is a tool to perfect some aspect of the soul, then it is almost disappointing that there are some mitzvot (i.e. some opportunities) that we seldom have the chance to experience. By moving the line closer to our actual daily lives, the Sages have given us additional chances to "choose." And through choosing, we refine the soul, elevate our friends and lift our world.

Choice is our primary tool for acting in this world. Let’s not waste it.

Where Are You Going?
Were Adam and Eve Jewish?
How I Learned to Love the Multiverse
10 Big Jewish Inventions
Comments