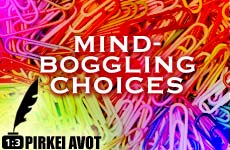 God could have created a bunch of puppets. He created humans instead.

Each of the next three Mishnahs expounds on different aspects life's fundamental triad, as discussed in the previous Mishnah: Torah, Avodah (service), and Chesed (kindness). Our Mishnah focuses on "Avodah" ― the proper approach to serving God.

God created human beings in order to give them good. Yet a "good" is only truly good if you earn it, and not if you are just accidentally associated with it. We see this clearly from our own daily experience. While there is a certain guilty pleasure in receiving more than we deserve, it also carries a tremendous destructiveness. Literature and the tabloids abound with stories of moneyed layabouts whose lives are destroyed by inherited wealth.

Even young children recognize the insignificance of gold stars for just showing up.

A human being whose life focuses on consuming the fruits of another's labors atrophies, corrupts and wastes away. Even young children recognize the insignificance of gold stars distributed to everyone just for showing up. Still, a pat on the back, a smile and recognition of a job well done is the kind of confirmation every soul hungers for.

In The Way of God, Rabbi Moshe Chaim Luzzatto (16th century Italy) explains that among all the good available in this world, the ultimate good is a relationship with the Creator and Source of All Good. Therefore God created a world in which you can build a relationship ― and "earn" that ultimate good.

God created a world in which some actions tend to make His presence clearer and more real, while some actions tend to obscure His presence and make Him seem more distant. Man was created with the ability and opportunity to choose between these behaviors. While not all choices have a moral component (e.g. picking between vanilla vs. chocolate), those that do bring you closer to God.

These "physical actions with a moral and spiritual aspect" are called "mitzvot" and act as a link between the spiritual and the physical. Mitzvot serve as the levers which allow physical actions to perfect a supra-physical soul. Each choice of good tends to refine the world, and brings the benefit of a closer relationship with God. Each rejection of good tends to corrupt the world and brings the detriment of distance from God.

Paradoxically, this model ― where good choices bring clear rewards and bad choices bring obvious damage ― actually fails to bring the maximum good into the world. It is clear that God's ultimate goal for human beings is not for them to do good. It is for human beings to choose to do good. If God merely wanted to maximize the number of "good" actions in the world, he could have created a race of puppets and robots who would invariably exhibit the desired behaviors. For behaviors and choices to be meaningful, it is critical that we could have acted otherwise... but chose to do good.

If all destructive choices were immediately answered with an electric shock, only crazies would do evil.

If God had created a world in which all good actions were rewarded with chocolate, and all destructive choices were immediately answered with an electric shock, only crazies and rebels would dare to do evil. Although we would theoretically have "choice," we would be functional automatons.

This idea suggests one answer to the puzzle of why God "hardened Pharaoh's heart" during the Ten Plagues. On the surface, it would seem that God was removing Pharaoh's free will. If you look deeper, you will understand that God was actually restoring it. In the face of the overwhelmingly tragic consequences of holding back the Jews, how could any sane man resist the demands of God? The battle was so dominated by God that Pharaoh was compelled by logic to concede.

Confronted by such mind-boggling firepower, Pharaoh was a mere puppet without any real choice. By hardening his heart, God gave Pharaoh the strength to counteract the force of the open miracles, and returned to Pharaoh the ability to decide according to his desires, independent of the external consequences.

In a world in which good choices clearly produce rewards, and bad choices bring damages, there would be no moral choices ― just economic ones. Doing good would be reduced to a financially optimal decision rather than a spiritually purifying one. Thus it was necessary to create a world where there was a "cost" to doing good and a "benefit" to doing evil. Spending money to feed the poor reduces your ability to indulge your pleasures, while bonking someone on the head does in fact get you a new wallet, some credit cards and a little extra spending cash. The question is, are they worth your soul?

Human Beings were given a powerful drive to satisfy short-term physical desires, and also the strength of will to act instead according to their understanding of what's proper. The Torah ― our "Instructions for Living" ― helps clarify that understanding.

One danger of providing external motivators to encourage a behavior is that when the rewards cease, the behavior is soon extinguished. If you serve God for the sake of external reward, then it really isn't God you are serving, but rather the reward. It is crucial to remember that the goal of the system is not the delivery of "reward," but the delivery of the greatest benefit ― a relationship with your Creator.

How deep is a relationship if you are only in it to receive gifts?

You were created in order to have the opportunity to build a relationship with God. How strong and deep of a relationship can you have if you are only in it for the gifts you receive?

Antiginos says, don't serve God because He's a sugar daddy, and you'll get rich doing so. Don't do it because it'll help you rack up the cosmic mitzvah points. God created you because He loves you, wants to give to you, and wants a relationship with you. Build your relationship for the sake of the relationship, not for external gifts. But be sure to build it.

Anitiginos continues with a reminder of the flip side. Just as choosing Good draws you closer to God, choosing Evil brings damage, destruction and ill into the world. Serve God for the relationship, not the reward. "And let the fear of heaven be upon you." Realize that there are significant consequences for choosing to distance yourself from Him.

One clarification: Antiginos is not rejecting the idea of ultimate reward for doing good. He merely holds that your motivation for serving God shouldn't be the external reward. Two of the great heretical movements in Jewish history, the Beothusians and Sadducees, were founded by students of Antiginos who misunderstood his message. Starting from the premise that there are no ultimate consequences to our choices, these students wandered off the path and led generations of Jews away from Torah and to their spiritual end.

Give It All You've Got

The Eye That Sees

How to Deal with Nonsense Criticism
Don’t Believe in Other Gods Versus God is One
Seeing Without Eyes
Why Shouldn’t We Eat Whatever We Want?
Comments
MOST POPULAR IN Spirituality
Our privacy policy
Aish.com Is Looking for Great Writers