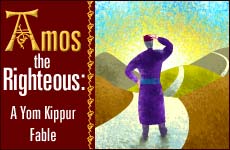 Those who believe in the power of good deeds love to tell his story.

On Yom Kippur, it is fitting to remember that our Torah says that deeds are the primary currency of Judaism. Not faith, not meditation, not even worship. First bring your sick neighbor a bowl of soup. Then pray. But first, the soup.

No one understood this better than Amos Goodheart.

One day in early spring Amos, a wealthy merchant, received a summons to appear before his King. So, next morning, dressed in his finest apparel, Amos the Righteous stood before the throne. Solemnly, the King told him that he must prepare for a journey to another kingdom. "Tomorrow," said his ruler, "you must depart. Be at the throne room at dawn and I will show you the way. And be prepared for your journey," he cautioned.

A thousand questions, like the lights that flashed in the huge candelabra over the throne, danced in Amos's mind.

"Amos, you may only take with you that which cannot be carried."

But before he could turn doubts into questions the King spoke. "Amos, you may only take with you that which cannot be carried."

The voyager was left with his unanswered questions. But one did not interrogate the King.

Not much time, thought the apprehensive traveler. By dawn tomorrow he must be provisioned for a trip of unknown duration to a foreign destination. But what to carry in the light of the puzzling riddle?

What was necessary for life in a new land but "cannot be carried"? After consultation with his advisors, he deduced that his ruler intended him to carry whatever bundles did not require the labor of his hands and arms. Aha, he would fill his pockets. But due to his many possessions what voluminous pockets they must be.

First, gold. He must bring his gold coins. A new enterprise in a new land would require much capital as well as credit. Gold had universal value. And there was his lock-box full of contracts, documents of legal ownership, and titles. He must bring his titles. But wait -- what about provisions for the trip?

A chartless journey of indeterminate length? He would need food: many wheat cakes flavored with sesame oil and honey. But he recalled the king¹s riddle. He could "only carry that which could not be carried." And pockets were only pockets; there were hard choices to make.

He summoned his tailor. "Make me a suit of clothing, immediately!" he commanded, "with many pockets. Huge pockets. Deep and wide. For tomorrow our ruler is sending me on a lengthy journey to a faraway kingdom."

Late that night the tailor returned with his creation. The merchant smiled. It was made exactly to his specification. A row of pockets lined the front and back of the pants. And the coat -- by use of the lining -- was one gigantic pocket. Tomorrow, thought the merchant, he would load up and appear before his Master.

And so he did. But he was a ludicrous figure. His pockets, stuffed with gold coins, oily wheat cakes, and reams of titles, deeds, and letters of credit, pulled him down like an invisible hand. His pants, had he not clutched them with both hands, would have descended below his knees. Even worse than his sagging pants, his weighty coat slumped his back and shoulders. His dignity had fled. This was no way to appear before the King. Amos the Righteous was now Amos the Clown.

But what could he do? Every pocket held a commodity that could mean survival in a new kingdom. Loaded like a mule, he stumbled to the palace.

The throne room was empty. The jeweled candelabra had vanished. It was as dim as a moonless midnight when only a single star glitters between the clouds.

Where was the King? How to reach the new kingdom without the guidance of the Master Navigator? He was surrounded by shadows. Behind him, unreachable, lay his former home. Ahead, there was only a foreboding mystery.

Amos Goodheart slumped on the dirt floor that once was graced with a rug of the purest fleece. A gust of wind chilled his face like the breath of the Angel of Death. Instinctively, he looked up to direct his lamentations to the Master before whom he kneeled. Now he saw that there was no solid ceiling in the throne room. He was in a deep well of time. Above him only a pale light, like dawn, silhouetted shadowy figures, half-human, half-mist.

Suddenly he heard voices. First a child. "Amos Goodheart, have no fear.

"Help me, please help me," sobbed Amos. "The King is gone and I don't know the way to the land over the mountains."

Suddenly over the hum of the wind, he heard voices. First a child. "Amos Goodheart, have no fear. You paid the doctor to straighten my leg. I chased the rabbits in the meadow, thanks to you."

Then an older couple: "Amos, you were a loving son to us. You brought gratitude and loyalty, like sweet music, to our union."

A pale woman said, "When I was sick you brought me meat broth. Hunger and loneliness, you banished from my life."

"You helped me one cold winter night, pulled my donkey from the ditch," said a neighbor. "And inspired me to do the same for others."

"And I'm the beggar boy. Everyday on your way to the shul, a coin you put in my cup. I grew up without bitterness because of you."

Benedictions from a life of good deeds anointed the head of Amos Goodheart. He stood tall. His clown clothes dissolved at his feet. And he smelled like honey clover in the meadow.

"Here, here is the way," they said. And they all set off together on the longest journey a man can make. Amos the Righteous carried nothing except his good deeds.