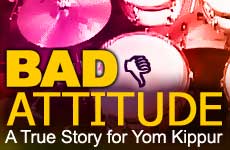 "My career was still stuck in neutral. I wasn't working. I wasn't doing anything to get things going either, except blaming my roomate for ruining my life with his success."

Botz and I had been playing in a band together for over a year. We shared an apartment together in Brooklyn. This day, Botz came home later than usual.

"You don't understand. Hendrix, Janis Joplin, Jim Morrison; all of them died when they were twenty-seven."

"Look at what they did by twenty-seven. Me, I'm twenty-eight and I'm still living with you."

We realized it was time to start to do something, like working on our careers. Botz suggested we try the jam session scene.

Even a good jam session can attract some of the world's most awful wanna-be musical nightmares.

Many clubs host a Jam Session or "Open Mic Nite." The club hires a house band and invites all local talent to come and sit in. A good jam session will attract some of the area's most accomplished musicians. It will also attract some of the world's most awful wanna-be musical nightmares.

Botz figured that if we went to jam sessions long enough, somebody would eventually hear us and hire us.

"It's just a matter of time until I get the Bowie gig," he'd say.

A jam session usually begins around ten at night and runs continuously until four in the morning. The better musicians are generally already known by the houseband. These musicians are asked to sit in as soon as the bandleader notices them in the club. Everyone else is assumed to be musically inept and forced to wait around until the end of the night.

Botz caught on to this before I did. "I think we're gonna get 'dweebed' tonight," he said.

"We're not gonna get to play until late. They're gonna stick us up there with all the dweebs who can't play."

He was right. It was horrible. The problem playing with a lousy musician is that he makes everyone else sound as bad as he is; a band is only as strong as its weakest player.

We'd wait around for hours only to get stuck playing with a nerd accountant weekend-warrior type. He'd call "Red House" for the tenth time that night and then try (without succeeding) to display his virtuostic prowess (of which he had none) to his friends.

After about three weeks I couldn't take it anymore.

After about three weeks I couldn't take it anymore.

"I quit Botz, it's not worth it. There's got to be a better way to make it in the industry," I told him.

"Okay man, but I'm going to keep trying. Something big has to happen eventually."

After months of agony, Botz was finally given a break. The regular drummer had locked himself in the bathroom. He couldn't be persuaded to come back on stage. Botz was asked to sit in with the houseband.

It didn't take them long to realize that Botz was one of the best drummers in New York. Soon he was the one they asked to sit in when the top players showed up. People began to hire him for local gigs and take him on short road trips to Jersey or Connecticut. He became the house drummer. He was beginning to make a name for himself.

My career was still stuck in neutral. I wasn't working. I wasn't doing anything to get things going either. I asked Botz if he wanted to jam one night.

"I'd love to but I'm booked all week," he said. "Bobby Blue Blood needs me on Thursday. Sammy Two-Toes needs me over the weekend. I'll be with the Sludge Factor the whole week after that. Maybe we can do something three weeks from yesterday?"

I was miserable. Botz was busy busy busy and I was home alone watching re-runs.

I was miserable. Botz was busy busy busy and I was home alone watching re-runs of "All in the Family."

I searched for ways to explain Botz's success. "It's because he's a drummer. There's a shortage of good drummers. If I played the drums I'd be working too." Or: "It's because he's older than I am. It's natural for a person his age to be working regularly." Or (after I thought about the situation deeply): "Maybe it's because he's tall. Nobody wants to hire a short guy like me."

Botz was starting to annoy me. "He leaves his hair all over the bathtub. He never does his dishes. The whole house stinks of garlic. Why is olive oil everywhere?!"

Botz came home late one night from a gig. He opened the door to get into the apartment. It squeaked.

"ALWAYS THINKING OF YOURSELF! WHY DON'T YOU THINK ABOUT SOMEBODY ELSE? HOW DARE YOU BARGE IN HERE WAKING ME UP LIKE THAT!!!"

Botz cowered around the apartment like a sheepdog. He mopped the floor. He defrosted the refrigerator.

Botz walked into his room confused. I was furious.

It took me a few days to calm down. Botz cowered around the apartment like a sheepdog. He mopped the floor. He defrosted the refrigerator. "Are you still mad?" he asked me.

"Can I do anything?"

I was jealous. Botz had managed to jumpstart his career and I hated him for it. I hadn't been willing to pay my dues. I hadn't bothered trying anything else either. I'd opted to wallow in self-pity. Instead of seeing the situation for what it was, I chose to rationalize and justify everything. I allowed it to build up inside me until the inevitable happened -- I exploded. It was time for me to confront the issue head on and grow up.

"I've taken some time to look at things objectively. I realize that I can't hate you just because I'm too lazy to get my life together."

"It's okay ... you know, now that I'm in the houseband, I can get you on stage with the real musicians. I can keep you from getting dweebed. You should come down sometime."

We were friends again. We went to White Castle for a reconciliatory meal.

"Nothing like indigestion as a substitute for bad feelings."

I ordered six mini-burgers. Botz got the cheese-fries and a Coke. My intestines rumbled in anticipation. Life had returned back to normal.

Seven years later I found myself in Jerusalem. A crazy chain of events had led me to rediscover my Jewish roots. The heavy metal thunder of years ago was now just a ringing in my ears.

I looked back at my failed attempt to jumpstart my career. "What was I thinking?" I thought to myself. "Instead of dealing with my feelings and shortcomings I had made Botz into my whipping boy."

I thought about it more. "I could have kept on believing my excuses, but that would have been lame. I guess when I saw things clearly I realized that I had to be the one to solve the problem. Botz wasn't jealous. I was."

I had stumbled upon a fundamental Jewish principle: My life's biggest blunders were for me to deal with and no one else.

I wandered into downtown Jerusalem to buy warm beer and falafel. "If Botz ever comes to Israel I'm going to turn him on to shwarma," I thought to myself. "It sure beats White Castle."

I felt empowered. I felt I could handle any challenge that came my way. I had taken charge of my life at last.

Yom Kippur: Partner Track
G-d Time
Shavuot is The Holiday of Cheesecake and Blintzes
What Does Kosher Mean Literally?
Comments
MOST POPULAR IN Stories
Our privacy policy