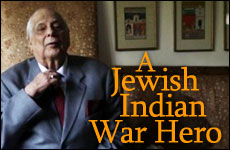 Lt. Gen. Jack Jacob, a national hero in India for likely saving hundreds of thousands of lives, is planning to fade away.

So Jacob, India’s “top-ranking Jew,” stayed home on his recent birthday, preferring to be alone in his modest New Delhi flat while enjoying his birthday cake, a special delivery from Nachum’s – Calcutta’s famous Jewish Bakery and now among the last of the once many Jewish-owned establishments in the city.

Sitting on his golden brocade sofas – he calls them his “thrones” – Jacob’s answers to a retinue of questions are instantaneous and measured. He occasionally illustrates his point with passages from English poetry from the first half of the last century.

He has loved two women, he says, but they did not wait for him. His brothers are no longer alive; he has no contact with extended family. Calcutta’s Jewish community has mostly migrated to Israel.

“My friends and peers are all gone,” Jacob says.

Jack Farj Rafael Jacob, wildly accomplished and widely respected, is best known for his decisive role in the 1971 Bangladesh war. Indians and historians generally agree that his courage, strategic thinking and chutzpa changed the course of South Asian history.

What had started as a freedom fight by the Eastern wing of Pakistan (now Bangladesh) against mainland Pakistan to the west – the two geographically separated regions straddle India – turned into a full blown humanitarian crisis. Estimates from historians and governments range from 500,000 to 3 million people being massacred in the conflict along with countless thousands of rapes and other atrocities. As a result, some 10 million refugees streamed over the border into India, which then declared war on Pakistan.

Jacob, then chief of staff of the Indian Eastern command, knew that a protracted war, of which he was the Indian commander, would claim countless more lives. As the war began, trudging through swamp terrain, his troops enacted a daring plan to capture Dhaka, the capital of East Pakistan.

Two weeks into the war, Pakistan’s commander in East Pakistan, Gen. A.A.K. Niazi, invited Jacob to lunch to discuss a cease-fire. Jacob wrote up an “instrument of surrender” document for his counterpart and flew with it across enemy lines, unarmed and accompanied only by one staff officer.

Niazi was given a stark choice: Surrender unconditionally and publicly, and receive the protection of the Indian Army for all minorities and retreating troops, or face an Indian military onslaught. Jacob gave Niazi 30 minutes to decide.

‘I appealed to God for help and said the Shema Yisrael’

Jacob, as he retells it, went out to the veranda, pacing for the full half hour. Exhibiting his legendary self-control, the general appeared relatively calm while puffing his pipe and asking the Pakistani sentry about his wife and children. But knowing that he had been bluffing, “I appealed to God for help and said the Shema Yisrael,” he told JTA.

Niazi agreed to the terms. The next day, 93,000 Pakistani soldiers surrendered. Jacob had but 3,000 Indian troops, 30 miles away, behind him.

Multitudes were likely saved by this surrender, still studied by military students.

Multitudes were likely saved by this surrender, still studied by military students. Recognizing his role, last month the Islamic Republic of Bangladesh awarded Jacob a certificate of appreciation for his “unique role” in the formation of the nation.

Jacob was born into the once vibrant Baghdadi Jewish community of Calcutta in 1923. His was a deeply religious family, and his parents hired Hebrew teachers for him and his brothers. But Jacob says he “just wasn’t interested, something I now deeply regret.”

When his father fell ill, the children were sent to a boarding school high in the Darjeeling hills. Jacob excelled in his studies and fell in love with the virgin forests, developing his lifelong passion for the outdoors. As a teenager he loved poetry and was especially influenced by the work of wartime poets. World War II had started and the Jacobs adopted a family of Jewish refugees from Hitler’s Europe.

‘I joined the British Army to fight the Nazis’

“I was appalled by their stories, by the atrocities,” he says, “I joined the British Army to fight the Nazis.” Jacob’s father initially disapproved, but eventually gave his blessing out of respect for his son’s motives.

When India gained independence in 1948, Jacob continued to serve in the Indian Army, swiftly rising in the ranks.

“The only place I encountered anti-Semitism was from the British in their army,” he says. “Among Indians it does not exist.”

After retirement in July 1978, he was appointed as the governor – usually a ceremonial position – of the small southwestern state of Goa. In another display of Jacobian hutzpa, he imposed the rarely used “Governor’s rule” to combat an acute parliamentary crisis “reminiscent of a game of musical chairs.”

He battled corruption, paid back high-interest loans and saved large tracks of forest from the mining industry by designating those lands as wildlife reserves. Jacob was next appointed governor of Punjab. When he left the post, graffiti went up on the walls: “Without Jacob, who will feed the poor?”

Jacob still will not share details of his role in forging the diplomatic bond with Israel. However, when Israel’s ambassador to India arrived in Delhi this year, he brought a personal letter for Jacob from Israeli President Shimon Peres.

I need not reiterate the importance that Israel attaches to its relations with India, and want to express our appreciation for your support.

“I need not reiterate the importance that Israel attaches to its relations with India, and want to express our appreciation for your support,” Peres wrote. “We are proud that as an Indian Jew, you have played such an important role in the defense and development of your country, and trust that your friendship will serve to promote deeper and broader ties and cooperation between Israel and India.”

Peres also congratulated Jacob on his new best-selling autobiography, “An Odyssey in War and Peace.”

Jacob has been to Israel several times, even before the forging of diplomatic relations. He was on stage as an honored guest during the 1995 opening ceremony for the Jerusalem 3000 celebrations. Over the years, Jacob had developed close friendships with Israelis such as Peres and Yitzhak Rabin. He had a particular fondness for Motta Gur, the Israeli paratrooper commander whose forces captured the Old City of Jerusalem in 1967.

“Your military achievements were of much interest in my country,” Gur once wrote to Jacob in a letter delivered via a mutual friend in the days before Israel-India relations. “Your performance is, without a doubt, one of the best in modern warfare.”

Today, Jacob’s uniform hangs in the Israeli military museum Latrun. He even donated his mother’s silver wedding girdle and jewelry to the Indian Jewish museum in Lod, Israel.

Was he ever tempted to move to the Jewish state and offer his military expertise?

“Israel has outstanding military leaders of their own, they do not need me,” he says. “Besides, India has always been very good to us. I am very proud to be a Jew, but am Indian through and through. I was born in India and served here my whole life; this is where I want die.”

This article originally appeared in the Times of Israel.

Israel's Vital First Strike
It Takes A Lot Of Faith To Be An Atheist
How Instagram Brought Back This Nostalgic Soup
What Makes Eli Run?
Comments
MOST POPULAR IN Israel
Our privacy policy