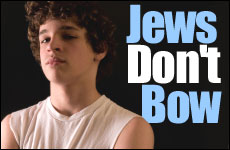 Little did I know that the source of my chutzpah reached back thousands of years, to Mordechai.

If you’d met me growing up in El Paso, Texas you wouldn’t have been able to tell I was Jewish. When I was six and my brother was 10, his gymnastics coach asked my parents if they would consider sending my brother to begin training to be an Olympic gymnast. My parents were in the middle of a divorce, and my brother’s future as an Olympic gymnast got buried under the mess of my parents’ lives. But I, unaware of this greater drama, did what all little brothers did. I followed my brother and joined gymnastics as well.

One day at gymnastics class, the instructor asked me to bow down for a gymnastics routine. I refused. “Aaron is something wrong?”

“Please bow down like all the other boys and girls.”

Again I remained adamant in silence. The gym coach had hit upon the only thing I knew from reform temple that as a Jew I was not allowed to do.

Struggling inside I finally spoke up, “Jews don’t bow down!”

I’d only started going to the reform Sunday school a year earlier but I remembered being told, as I sat in my Purim costume eating my first hamentashen, that Mordechai was a Jew and he didn’t bow down to Haman who turned himself into an idol. Jews don’t bow down.

I wouldn’t budge. Finally my brother came over and explained to me that I wasn’t bowing to anybody, and that it was okay this time to bow.

At the end of 5th grade I was one of the most popular kids in school. My friends and I listened to the music none of the other kids had yet heard of, and wore clothes before anybody had ever seen them, until one day all my good friends turned on me. I showed up at school and none of them would look at me. No one ever explained why. By the end of 6th grade some of these same friends who had fallen in with very violent people had even threatened to kill me. Later I would understand that God was pouring down his mercy on me and trying to rip me away from these superficial and troubled people, teaching me to look deeper into life.

Going to Church at St. Andrews

I told my parents that if they didn’t send me to private school I was going to drop out for fear of my life. My parents agreed and sent me to St. Andrew’s Episcopalian Parish School. (The Episcopalians are moderate Christian group somewhere between the ritualistic Catholics and non-ritualistic Protestants). It was a great move for me at the time. We wore uniforms and there were no popularity wars. The only downside was that every morning before school started I had to attend church. In the middle of the service everybody would line up for a wafer and wine before a cross, and say something like, "This represents the body of Jesus and the blood of Jesus.” One of the priests would insert the wafer in every child’s mouth. We negotiated that I would walk up with all the other kids but nobody was to ever put anything in my mouth.

We negotiated that I would walk up with all the other kids but nobody was to ever put anything in my mouth.

Everything was fine until one day the headmaster left town for a week. When everybody kneeled down, the officiating priest noticed one child sitting contently in his seat. Breathless he caught up with me after church and announced, “You have to bow!”

“I am a Jew. Jews don’t bow down to idols,” I answered back.

“If you don’t bow you can’t come to our school,” the priest shot back. By the end of the day I had organized that the four other Jews in the school should also refuse to bow.

Our parents called up. The next morning the four of us sat, not bowing.

In unison we answered, “Jews don’t bow down.”

He was livid, but every day we would show up to their church and sit respectfully as everybody else bowed. Eventually they kicked me out. I left with one message clear for life: “Jews don’t bow down.”

Some kids have more chutzpah than others. I had a lot, but God had arranged it that I directed the majority of my natural chutzpah at a society that I saw as insistent on having me bow down. Throughout the rest of high school and into college I found ever-subtler forms of how the non-Jewish culture I was living in was trying to get me to bow. Whether it be through the guise of teen culture via high school prom dances, joining a football team, or a fraternity; or be it getting sucked into the pull of never-ending cycle of consumerism that tried to convince you that first you needed a car, and then a stereo to put in your car, and then a nicer car, etc. till you found yourself enslaved working to have the stuff that they claimed would make you somebody special.

My conclusion was to get as far away from Western culture as I could. I wasn’t quite sure where I was supposed to go. By 1993 I found myself in a land free of Western culture’s influence -- Moscow, Russia, after the collapse of the Soviet Union. I’d heard the Soviets were anti-Semitic so I didn’t tell anyone around that I was Jewish, and I never used my last name. Then one day I was sitting with the six friends I had made at the Russian university I was studying, I decided to confess.

They all looked at me. “Oh really? So are we,” they all said nonchalantly.

I had traveled thousands of miles from my home, from everything I knew, to discover that being Jewish was something so powerful that even a fascist Soviet regime that wiped away all religion couldn’t keep seven Jewish souls who knew nothing about being Jewish from finding each other and bonding together. There was something in all of us that refused to bow.

For the first time in my life I knew that my Judaism had to mean something.

Being Jewish somehow defied everything. I had no idea what it meant to be Jewish and I couldn’t ask them. For all they knew I could have been a rabbi. I just knew now for the first time in my life that my Judaism had to mean something.

Six years later, a few weeks before Purim, I found myself sitting in Bnai Brak’s Ponevezh yeshiva. I could barely read the Talmud then, but I wanted to learn Tosfos, so every day after lunch, I would sit with a young yeshiva bochur for an hour who would go over the Tosfos again and again until I could repeat back what he said to me, even though I had no idea what it meant.

One day after my lesson I sat, and prepared for Purim when I read the words in Hebrew, "There was a Jewish man in Shushan the capitol whose name was Mordechai, son of Yair, son of Shim'I, son of Kish, a Benjaminite…" (Megilas Esther 2:5)

I discovered that Mordechai was from the tribe of Benjamin. The verse told me that in order to discover the root of Mordechai’s strength to singly defy a world power. Benjamin was the only one of the 12 sons of Yaakov who did not bow down to Esav, the father of Western culture. This little fact rippled through one thousand years of history until it would show up in Mordechai, whose confidence in being a Jew would light up the waning faith of Jews in 127 countries, and overturn a government and genocide.

And it would continue to ripple for two thousand more years till it showed up in a little Jewish boy sitting in a reform temple in El Paso, Texas.

A version of this article originally appeared in Mishpacha Magazine.