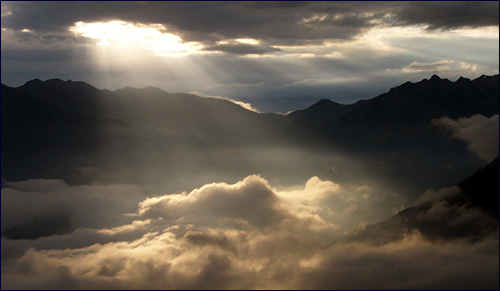 Sometimes receiving a sign that God is orchestrating events can transform one’s life.

One afternoon, Toronto cardiologist Dr. Earl (Eliyahu Avraham) Nussbaum discovered that his secretary had mistakenly scheduled an appointment with him for an elderly woman, who had previously been seen by another cardiologist in his group practice. She was not even his patient. Moreover, he was supposed to pick up his daughter after school at that time at a bus stop exposed to the elements,

Though irritated, he knew his colleague would never agree to see a patient not on his schedule for the day, even if she was elderly and already in the office. So he met with her rather than raise a ruckus with the secretaries.

After speaking to the patient and examining her, he ordered a series of tests, and scheduled a follow-up appointment to go over the results. Her results were fine. But to his surprise, when Dr. Nussbaum informed the elderly woman that her heart was fine and her symptoms not a cause of concern, she showed no relief and remained completely affectless.

At that point, her husband confided to Dr. Nussbaum that his wife suffered from chronic anxiety and asked if he could prescribe some medication. "Nervous? What is there to be nervous about? You should be happy that your heart is okay!"

The husband indicated with a hand gesture that matters were not so simple, and looked to his wife for permission to share something private with the doctor. She nodded.

"We had a tragedy in our life," he began. Though it was not his style to be nosy, Dr. Nussbaum pressed him for further details.

"Thirty-five years ago, our 18-year-old daughter was killed when her car was hit by a garbage truck," the elderly husband continued. Dr. Nussbaum asked where the accident took place, and when he was told Montreal, he pressed for further details of the location. The old man answered, "In St. Laurent."

"I was there," Dr. Nussbaum blurted out.

The scene at the busy intersection at the end of the street on which he had lived as a child flashed vividly in front of him. A garbage truck had struck a small Austin mini on the passenger side, with such force that the front wheel of the truck was bent inwards. A body lay on the grass nearby, under a tarp.

Long after the gawkers had left the scene, the curious ten-year old remained. He was there when the truck from the morgue arrived and lifted the tarp to reveal a beautiful young girl, with long blonde hair. As the morgue workers lifted her, the young boy noted that there was no disfiguration of any kind. She appeared to be sleeping peacefully. Even the way her limbs hung, as she was being carried, did not suggest any broken bones. For over a week afterwards, Earl had nightmares every night, which left the scene permanently engraved in his memory.

Now, 35 years later in his office, Dr. Nussbaum related his tale to the still-bereft parents of that beautiful girl with the long blonde hair. Then, the trained cardiologist added, "She did not suffer at all."

"Really?" the old woman replied. "I saw her afterwards, and I always wondered about that."

With the benefit of his expertise as a cardiologist, Dr. Nussbaum recognized that death had been caused by the rupturing of the connection between the pulmonary artery and the aorta. At birth, the ligamentum arteriosum forms out of scar tissue, and connects the two parts of the circulatory system. In high impact injuries, that ligament pulls out of the aorta, like a plug ripped from its socket. Death is instantaneous. All this he explained to the victims’ parents.

Surely no “coincidence,” they felt that God had left them a calling card.

The three of them sat there overwhelmed by the sense that something supernatural had just taken place. What was the likelihood that, 35 years after the tragedy, this Jewish couple would meet a witness of the accident who was qualified to assure them that their daughter had not suffered? Surely no “coincidence,” they felt that God had left them a calling card. A calling card means that God was there, even though He was not seen at the time. If God had arranged this serendipitous meeting, perhaps He did care about them.

The next time they saw Dr. Nussbaum, he did something he never did. He handed them the book, Garden of Emunah, by Rabbi Shalom Arush. This blockbuster book asserts the foundations of Jewish faith [emunah]: that, despite appearances, everything comes from God and everything from God is good, although our limited human comprehension may not be able to see God’s hidden hand or the inscrutable goodness hidden in what we experience as painful.

A year later, Dr. Nussbaum saw the elderly couple again. They were so transformed from the previous year that he did not recognize them until they reminded him of the car accident he had witnessed as a young boy. They had undergone a total metamorphosis, and the elderly lady exuded happiness. They were the type of cute old couple younger people seize upon to offer hope of a joyful old age.

When, at the following year’s examination, the elderly couple still looked transformed and happy, Dr. Nussbaum couldn’t restrain himself from asking what accounted for the entire change in their demeanor. The elderly woman replied that the first step had been their amazing encounter; the second step had been reading Garden of Emunah, which had convinced them that everything comes from God and that He indeed orchestrates events for their ultimate, if not immediate, good.

Does God Care about Me?

A major theme of Purim is God’s hiddenness. The only book of the Bible in which God is never mentioned, the story of Megillat Esther seems to unfold through a series of coincidences and surreptitious happenings. Indeed, the period of the Persian exile, coming on the heels of the destruction of the Holy Temple, was a turning point in Jewish history. While the Temple was the locus of God’s revelation, its destruction ushered in the long, painful period of God’s hiddenness.

Yet, although we have no open miracles such as took place when the Temple stood, God does leave His “calling card” in many hidden miracles in our lives. When faced with painful experiences, we are all plagued by the questions, “Does God care about me? Does He notice me? Does He love me?” God’s “calling cards” are the subtle hints that indeed He does.

Sometimes, as in the case of this elderly couple, just receiving a single assurance that God is orchestrating events, can transform one’s attitude toward life.

Adapted by Sara Yoheved Rigler from a piece by Jonathan Rosenblum that appeared in Mishpacha Magazine.

For the aliyat neshama of Yisrael ben Yosef Yehudah.

Esther and the Moon
In the Shadow of David and Goliath
Where Do the Laws of Nature Come From?
Saadiah Gaon, Rashi and Maimonides: How Three Rabbis Revolutionized Judaism
Comments