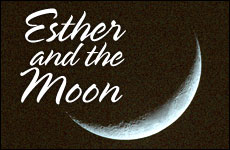 Purim and the mystery of Esther's non-Jewish name.

The name Esther comes from the Aramaic word sihara meaning moon. The Talmud says that the nations of the world called the heroine of Purim by the name Esther since she was as beautiful as the moon (Megilla 13a). There are many ways to describe beauty. Why is Esther compared specifically to the moon?

Furthermore, Rabbi Yonasan Eybeshitz asks what significance there is in specifically the non-Jewish nations comparing Esther to the moon. We accept the name to the extent that we too call her Esther and use the same name for the Megillah even though her real name was Hadassa. Why is the nations' impression of Esther relevant to us? (Yaaros Dvash 2:17).

To understand the significance of the moon, it is helpful to explain the prominence of the moon generally in Jewish thought, and specifically in the context of the calendar which is based on the moon. The first commandment in the Torah is "hachodesh hazeh lachem," literally “this month is yours,” which is the Torah’s commandment to establish the Jewish lunar calendar. (Exodus 12:2). The word chodesh meaning month is derived from the Hebrew word chadash meaning new. Unlike the solar calendar which is connected to the earth’s annual orbit around the sun, the lunar calendar is based on the waxing and waning moon. From our perspective, the moon is reborn every single month; it waxes until it is completely full and then wanes into oblivion, while the sun is consistently present. The lunar system is replete with renewal and leaves room for providence, something that is impossible in a system strictly based on cause and effect.

The moon is reborn every month, but “there is nothing new under the sun.”

A return to the story of creation provides us with an insight into what the sun and the moon represent on a deeper level. The kabbalists explain that God created the world to receive His light which conveys the ultimate good. However, the physical world was not positioned to fully receive that light. The world therefore failed to develop into the material manifestation of the spiritual realm possible had it been properly received.

The world’s failure to be a proper receiver has a celestial parallel. The Torah tells us that God originally created the two great luminaries. Yet it immediately proceeds to describe the moon, as the small luminary, and the sun as the great luminary (Genesis 1:16). Rashi explains that they were indeed created equal, but the moon complained that there was no room for two large luminaries and God told the moon to shrink itself. (Rashi, Ibid.)

The moon essentially reflects the light of the sun, and even before it shrank, its purpose was solely to reflect. The Hebrew word for moon is levana, which comes from the word lavan, white. White reflects all the colors of the visual light spectrum and is the ultimate symbol of reflection. However, while the original moon could have reflected all of the sun’s light, the diminished moon had no such capacity and the distinction between night and day resulted in the stark difference between the two that we witness today.

With this background, we can return to Esther and the source of her name. Esther is so called on account of the moon. A closer look at the entire story of Purim shows that it expresses the very message of the union of the sun and moon.

The story of Purim unfolded through what appeared to be a very natural series of events. No sea split and no plagues fell upon the house of Achashveirosh or Haman. Instead, through a dramatic plot replete with paranoia, politics, lust, and greed, Esther rose to power through the most unlikely circumstances and eventually induced the king to reverse his decree to kill the Jewish people.

Yet on a deeper level, there was nothing natural about Purim. As the Zohar notes, the term melech, king, in the Megillah is a disguised allusion to God (Zohar III p. 109a). A reread of the Megillah with that insight reveals God behind every turn of events, and the entire miracle which saved us.

All things in the world, even events that seem unrelated, march toward a higher goal.

The story of Purim represents the fusion of two systems. Externally, it is a world entirely under the sun with apparently natural rules of cause and effect that plod on without direction. It is the system in which the nations live, that of history, science and secular progress. Yet behind the scenes, every aspect of Purim is the product of God’s hidden providence, an expression of hachodesh hazeh lachem ― “this month is yours,” a spiritual system of complete novelty positioned to bring us to a specific destiny. Like the moon, it is hidden.

Purim reveals that in the end there is no real dichotomy between the lunar and solar systems of time. All things in the world, even events that seem to have no relation to anything beyond themselves, are part of a march toward a higher goal.

Purim, therefore, bridges the gap between everything under the sun, and time measured by the moon. Esther is named after the moon specifically because the non-Jewish nations called her so. On a deeper level, they understood that the events of Purim which stemmed from Esther were the hidden system of providence represented by the moon, even though they were revealed in a way that appeared under the sun. On Purim, the nations saw God’s hand in the story of Purim, and the Megillah says that many even converted to Judaism (Esther 8:17). The nations of the world observed this and associated the person who externally brought them about with the moon. That observation was accurate and the Jewish people properly adopted the name.

On a deeper level, the entire month expresses the connection between the sun and the moon. While our calendar is based on the moon, the festivals must fall during specific seasons which are governed by the solar year. We synchronize the lunar and solar years by occasionally (six times during a nineteen year cycle) adding an additional month. The month added to bridge the gap between sun and moon is a second Adar, the month of Purim.

Purim is uniquely associated with the end of time and our Sages say that it is the only holiday which we will celebrate forever (Midrash Rabba - Mishei 9). Today’s world abounds with innovation and revolution, bringing political changes which were considered almost impossible even just a few months ago. Those events of a world under the sun seem to have little connection to us. Purim, however, reveals that somehow all of history is part of a plan and all roads bring us to the destiny God chooses.

Now You See God, Now You Don't
Olivia Newton John’s Grandfather was a Nobel-Prize Winning Jewish Physicist
Don’t Believe in Other Gods Versus God is One
Seeing Without Eyes
Comments
MOST POPULAR IN Spirituality
Our privacy policy
Aish.com Is Looking for Great Writers