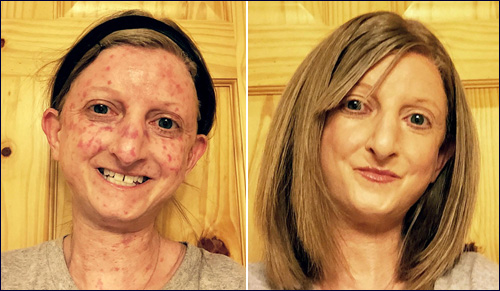 Growing up with chronic pain and deformities, I thought I paid my dues. How wrong I was.

When I was a child, I believed that God existed because that’s what I was told. Being raised in a Conservative Jewish family, keeping kosher, and attending Jewish Day School meant that believing in God was just something you did, like brushing your teeth. As I grew into adulthood, I foolishly subscribed to the preposterous notion that God intended for us all to endure a certain amount of pain in our lifetime. Once we reached that quota of hardship, we were entitled to uninterrupted happiness (an immunity card). This was my own personal take on how God operated. Yes, after thousands of years of scholars studying theology, Lisa Goodman had cracked the code!

I figured I’d paid my dues. After all, I was diagnosed with a rare disfiguring autoimmune disease – scleroderma – at the age of ten. My entire body was sprinkled with telangiectasia (red spots caused by broken capillaries), my arms and fingers were permanently contracted, and my legs were thin as twigs. Throw in the painful ulcers on my elbows and fingertips that leaked calcium and you can imagine how cool I looked in Junior High. In case growing up with chronic pain and deformities wasn’t enough to qualify me for God’s immunity card, I had a few other issues too. Like, a Bipolar father living in a halfway house whom I hadn’t seen since I was eleven and a difficult stepfather who was prone to harsh criticism. 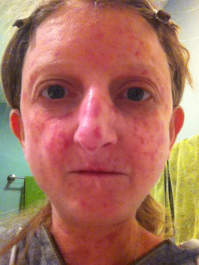 Yep, I had paid my dues alright. I felt I earned my young adulthood that brought me tremendous happiness. I met my husband, David, who looked past my exterior and fell in love with me for the person I am. We married, established fulfilling careers, and welcomed our son into our lives. Our life was far from perfect, but we were genuinely happy most of the time.

I told my 3-year-old that I’d be back in four days with his new baby sister. I came home from the hospital 218 days later.

So, on April 26, 2006, I had no reason to believe that my scheduled C-section would result in anything other than a beautiful daughter and a small scar.

Due to scleroderma, both my pregnancies were high-risk. Since the birth of my son had gone so well, doctors assured me there was no reason to believe my daughter’s delivery would be any different. I told my three-year-old son that mommy would be back from the hospital in four days with his brand new baby sister.

I came home from the hospital – 218 days later.

I was bald, in a wheelchair, weighed under 80 pounds, and wore a hissing bandage on my neck that concealed the hole left by my tracheotomy wound. Needless to say, I suffered grave complications after my daughter’s birth. What began as a postpartum infection spiraled wildly out of control. I survived an emergency colectomy, eight major surgeries, the loss of my spleen, two tracheotomies, temporary paralysis, ICU Psychosis, and a myriad of other medical traumas that brought me to the brink of death at age 31. For many months I didn’t eat, drink, speak, move a muscle, or see my children. 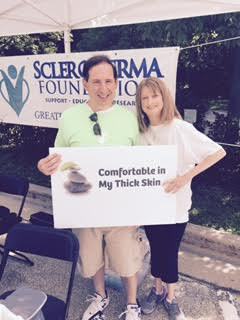 My husband Dave and me.

Those seven months away from my husband, newborn daughter, and toddler son nearly destroyed my marriage, ability to parent, will to live, and faith in God. I thought God and I had had a deal. If I could beat the odds of my scleroderma diagnosis (many scleroderma patients don’t survive more than seven years), grow up without a father, and just generally try to be a good person, God was supposed to reward me with my immunity card. I wasn’t expecting exemption from all things unpleasant. An occasional parking ticket, plumbing problem, root canal, or marital spat was certainly acceptable. I was simply expecting immunity from any major life catastrophe.

I was expecting immunity from any major life catastrophe. What had I done to deserve this from God?

During those 218 days, I would often weep to my mom and sister, wondering why God was punishing me so harshly. What had I done to deserve this from God? The hospital rabbi came to visit me weekly on Fridays, always bringing challah and grape juice. Most of the time, I had a tracheotomy and was unable to talk, but even if I could have spoken, I didn’t have anything to say to him. The last thing I wanted to hear was some rabbi’s “pearls of wisdom,” so I usually pretended I was asleep when I heard him enter my room. 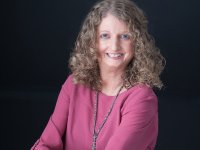 Yet, as angry as I was with God, I kept praying anyway. I had very little else to do with all my spare time. My family, friends, and total strangers all prayed for me as well. We had nearly every religion covered. In July, when my surgeon hit my splenic artery during surgery and I hemorrhaged on the operating room table, my mom even had our rabbi change my Hebrew name in an attempt to change my mazel and fool the angel of death.

By September, I was making slow and steady gains toward recovery. So when the hospital rabbi walked in on Rosh Hashanah, with great trepidation, holding his shofar almost as a peace offering, I smiled at him. Exhaling with relief, the rabbi asked if I would like to hear the shofar. I nodded that I did. My mom, little brother, older sister, and David all stood on either side of my bed holding my hands. The rabbi began to blow the shofar. As the familiar notes pierced the room, we all closed our eyes and let the tears flow freely. I knew we were all praying for the same thing. Please, God, make this a better year than the last, please let me be inscribed in the book of life. 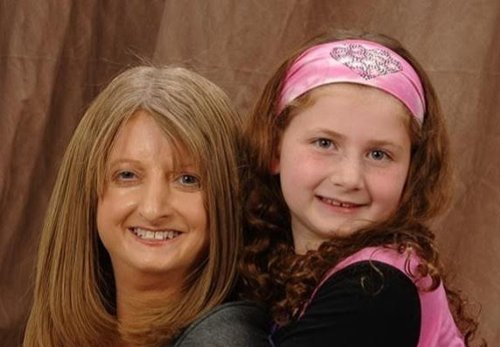 It was moments like that which allowed a glimmer of hope to seep back into my heart, but it was years until I fully reconciled with God.

In a world without miracles, I would be dead.

Eleven years later, I’ve made a remarkable recovery. After seven months in the hospital and another six months receiving intensive physical, occupational, respiratory, and speech therapy, I am able to eat, speak, and walk again. I’ve come to understand that God does not owe me anything, and that little ole me cannot fathom God. I no longer profess to have God all figured out.

Some people have told me that my survival is a miraculous gift bestowed upon me from God and that it has renewed their faith in God. Others have asked me how I could still possibly believe in God after what I went through. I have done a lot of soul searching, read a few books, and had several deep conversations with my rabbi. The truth is I still don’t know exactly what I believe. But I am wrestling with the questions.

I do know that if someone asks me if I believe in God, I don’t hesitate in my response. Yes, I do believe in God and miracles. In a world without miracles, I would be dead. Somehow, I’m here to raise my children. Somehow, my husband and I cobbled back the shattered pieces of our marriage. Somehow, my friends and family demonstrated superhuman strength and devotion to carry me through those 218 days. I think that “somehow” just might be God.

Lisa Goodman-Helfand’s unique life journey and ability to approach setbacks with tenacity, humor, and perspective have been featured by major news networks and media around the globe. Lisa is an author, national speaker, consultant, educator, and founder of Comfortable in My Thick Skin. Her memoir, Does This Hospital Gown Come with Sequins? makes a great gift for anyone facing a tough obstacle.