Can We Ever Unplug? 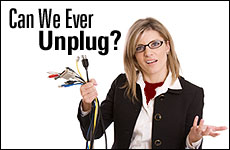 The prominent Kaiser Family Research Foundation recently shocked America with a ground-breaking study of media use among American children. According to the findings, the average 8-to-18-year-old spends over seven and a half hours each day using electronic media. That's 53 hours each week spent on-line, texting, watching TV, talking on the phone, playing video games, or (more likely) engaging in more than one of these activities at once.

That's more than most adults spend each week at work. In fact, aside from sleep and school, American children are basically always plugged into an electronic device.

As the mother of four children, I was aghast. True, my kids don't spend anywhere near seven and a half hours each day playing with electronic gadgets. But they're young, I thought. My oldest is just eight years old; perhaps with time he will bow to this new American reality.

It might be the new American reality, but I think it is an unfortunate one. People crave “real” experiences. We also crave connection with other people.

Heavy use of social media can make people feel socially isolated and depressed.

There have been a host of scientific studies that show heavy use of social media can make people feel socially isolated and depressed. Many of us will identify with the words of Dr. Patricia Greenfield, who directs the Children’s Digital Media Center, which is a collaboration between UCLA and California State University: “Human beings evolved for face-to-face communication. The presence of another person in the flesh triggers important human emotions such as empathy. We may be reducing such emotions in developing human beings by reducing face-to-face communication and augmenting electronic communication.”

While Dr. Greenfield (like many of us) acknowledges that modern inventions like the internet have great uses and benefits as well as drawbacks, her words seem to capture something essential in social communication today. In our fast-paced world, we can do and learn so much, but too often these amazing new abilities do nothing to make us happier or more fulfilled. There can be a feeling that something is missing. Despite all the instant connections, the basic need for relationship with something solid and real is going unmet.

I had thought that the lifestyle my husband and I had chosen ensured our children against the seduction of so much media use. After all, we are raising our children in a home without TV. I am raising my children to respect values such as honesty, integrity, monogamy and modesty and, let's face it, those qualities are lacking on many TV programs.

The other reason we don't watch TV is that it is not a constructive use of time. If they are bored, I'd rather they play with a friend or one of their siblings, build something, make a beautiful project, or learn something new – rather than zone out in front of the TV.

So on that count I was secure: I don't expect my kids to start watching lots of TV anytime soon. But that only accounts for a fraction of the typical child’s media diet. In fact, the very day I read of the Kaiser Foundation's results, my two older children came home from school with notes from their teachers directing us to a website where they could play fun computer games that would review their weekly spelling words. For the first time in years, my kids said they didn't want me to quiz them; instead, they explained, they would do it on the computer.

I was saddened by this new development. I'd always enjoyed quizzing them on their weekly spelling, and as I watched them play spelling games on the computer (with their younger siblings gathered around, watching, of course) I thought more and more of the Kaiser study. Was this the thin end of the wedge? Were my children beginning to draw away from me, and from real human interaction, into a world of electronic stimulation?

The study also pointed to an interesting new trend: most children multitask. I didn't think much about this until later in the week, when I met some old friends for coffee. We met in the caf?, selected a table and sat down – then both my friends promptly reached into their bags, pulled out their cell phones, and laid them on the table. We chatted a while, and then as we talked, one friend looked down, read a text message, and quickly texted back. I looked at her, incredulous, but she just carried on our conversation as if nothing had happened.

A few minutes later, the second friend responded to a text message, too, and while she was texting, the first took the opportunity to send another message from her phone. This was getting ridiculous. "What are you texting for?" I asked, perhaps a little too strongly. Both my friends looked at me, surprised by my tone. One was helping a friend through a crisis, she explained; what was wrong with that? The other replied that her husband needed her input to make some social arrangements; it only took a minute to answer him.

I stared at my friends, dumbfounded. True, there is nothing wrong with helping out a friend or answering a spouse's question, but I still felt that our conversation wasn't as focused, wasn't as "real" as it should have been.

The next day was Friday. I was still disturbed by the events of the week. As usual, Friday was a busy day for me, with Shabbat beginning at sundown, and from that moment until Saturday evening we refrain from activities like cooking, writing and using any electronic gadgets. I was working to prepare our Shabbat meals when my kids came home from school. I asked them how they had done on their spelling tests. This was the first week they had prepared using the online games. What were the results?

My two older kids hung their heads. They usually do well on these tests, but that week had been a disaster: four wrong, three wrong. Not their usual level at all.

And then I realized that Shabbat has the power to illuminate the rest of the week as well. "You know what?" I asked my kids. "No more practicing spelling on the computer. From now on, we'll do it together, the old-fashioned way." They nodded and went to get ready for Shabbat – our family’s built-in media-free zone.