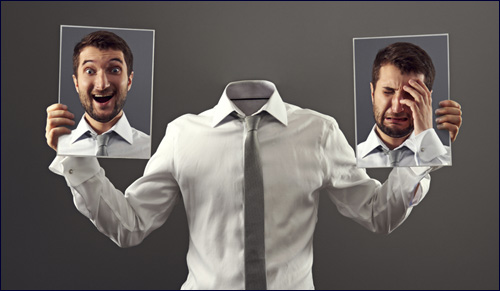 When Chanie Gorkin's high school teacher asked her class to describe their worst-ever day, Chanie turned the assignment on its head - literally.

Chanie told her teacher that she didn't believe in "worst days ever" and instead wrote a complex poem on the topic. Read normally, it seems to be a pessimistic meditation on life: the sort of poem one might expect from a sixteen year old.

But Chanie Gorkin was no ordinary sixteen year old, and the piece she wrote - Worst Day Ever? - is no ordinary poem. A student at the all-girls Beth Rivkah high school in Brooklyn, Chanie is an Orthodox Jew, affiliated with the Lubavitch branch of Hassidic Judaism. Her poem, she's explained, reflects the Jewish idea that it's possible to control how we see the world, whether negatively or positively: "I don't think there is such a thing as the worst day ever... I wanted to show how your day is really based on how you look at things."

Her poem sends that message in a highly clever way. After completing her poem in 2014, Chanie entered it into a poetry contest, and it was posted online. It enjoyed a modest readership - until July 2015. This month, a chain of coincidences sent her creative work ricocheting around the world.

First, an events promoter in London, Zachery Stephenson, complained on Facebook, posting about someone who'd let him down; then a relative in New York who'd come across Chanie's poem forwarded it to him in reply. Stephenson was so impressed he printed it out and posted it on the wall of a bar he visited: "It just kind of struck a chord and really made me change my perception of things," he explained, saying he'd never posted anything like that before.

Chanie's poem soon had a similar effect on a man named Ronnie Joice, who read the poem in the bar after spending the day interviewing for a prospective job and feeling "a bit worn out." He snapped a photo of the poem and tweeted it. "London's a really tough city to live in sometimes" he explained, saying the poem helped him to get the "right attitude" to deal with the stress.

Within a week, Joice's initial message was re-tweeted thousands of times, and Worst Day Ever? had become an internet sensation, downloaded over a million times, shared by thousands on social media, and translated into languages including Russian, Chinese and Hebrew.

As her poem went viral, Chanie herself heard about it only second hand. She is off working as a camp counsellor for the summer, and according to her mother is "too busy having fun" to spend a lot of time tracking her poem's new life online. Instead, it was Dena Gorkin, Chani's mother, who was left to explain to reporters the deep faith that informed her daughter's work. "One of the major tenets of Hasidic philosophy is that the mind rules over the heart, that we are able to channel our emotions to the positive," she described, "that there is God in everything, and it is part of our mission in life to look for the good, and to find it and to spread it."

Chanie agrees: "I'm very happy that so many people got this message and if it made people think a little more and inspired people to change their perspective then I'm happy."

Worst Day Ever?
by Chanie Gorkin

Today was the absolute worst day ever
And don't try to convince me that
There's something good in every day
Because, when you take a closer look,
The world is a pretty evil place.
Even if
Some goodness does shine through once in a while
Satisfaction and happiness don't last.
And it's not true that
It's all in the mind and heart
Because
True happiness can be attained
Only if one's surroundings are good
It's not true that good exists
I'm sure that you can agree that
The reality
Creates
My attitude
It's all beyond my control
And you'll never in a million years hear me say
Today was a very good day


Now read it from bottom to top, the other way,
And see what I really feel about my day.

Spirituality Without God
Morality and Abortion: Three Views
There Are No Limits
Adam and Eve Were Vegan
Comments