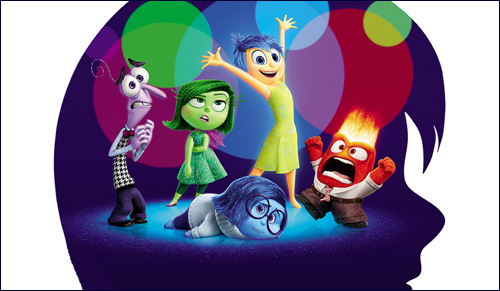 Pixar’s new movie is about why we cry. But don’t worry, there’s a happy ending.

Inside Out, Pixar’s latest comedy is a movie about why we cry.

We know why we cry. We cry because we watch Pixar movies.

Sadness has its place, like at a shiva, where it is what a mourner needs to help him cope.

The premise of the movie is that we’re all being steered around by a bunch of personified emotions who are constantly elbowing each other over the controls. We get to meet the various aspects of Riley’s personality – Joy, Sadness, Anger, Fear, Disgust, and Bing Bong. (Okay, Bing Bong is not an emotion. He’s Riley’s imaginary BFF – a dolphin-slash-cat-slash-elephant-slash-hobo from the 1930s that Riley used to play with she was three.)

The emotions’ descriptions are also their names. Though technically, Joy is the only one who’s an actual name. No one in real life is named Sadness. Unless they have horrible parents.

The emotions even look like what they are. Joy is a yellow smiley-face emoji with no shoes. Sadness is a blue teardrop who wears glasses and a turtleneck, and is kind of a bummer to be around. Fear is a paranoid purple nerd who tends to pass out a lot. Disgust is a perpetually-scowling green girl. Anger is a red, middle-aged man who reads the paper and gets mad about the headlines. (To be fair, the paper has a lot of shock headlines, such as “No Dessert!”)

But if you think that most of these emotions seem negative, you’re wrong. As Joy, the eternal optimist, points out early in the movie, every emotion has a job. Fear protects you from doing dangerous things. Disgust stops you from being poisoned. Anger works to make sure your life is fair, despite his poor interpersonal skills. Everything God creates has a purpose. As every rabbi says in his go-to funeral speech for congregants he doesn’t really know, there’s “a time to love and a time to hate, a time to be silent and a time to speak, a time to dance and a time to sit on the sidelines and try to have conversations over the music (Ecclesiastes).” Everything has a time.

Well, except for Sadness. None of the emotions knows why Sadness is around. She’s a drag. Literally. You have to drag Sadness around while she lies on the floor, letting the weight of the world’s problems get to her. And no one lets her drive.

As for the rest of them, they drive around making memories which are color-coded by emotion for easy reference later. And every night, when Riley goes to sleep, the memories are deposited in long-term memory via pneumatic tubes and a bowling ball return thingy. Basically, it takes a small village to raise a child. Technically, there are manuals that say what everything does, but the only one who reads them is Sadness.

But then Riley and her parents move halfway across the country, and it’s about that time that Sadness starts touching core personality-defining memories and turning them blue. This leads to a kerfuffle – when two sprites fight inside your head, it can only be described as a kerfuffle – and Joy and Sadness get sucked into the deep, dark recesses of Riley’s mind, along with a pile of core memories, and they have to go on a serious head trip to get back. If they fail, Riley’s memory islands will collapse, and presumably some kind of Alzheimer’s will set in. Meanwhile, Riley has to be steered by only Anger, Fear and Disgust.

This plot development must happen to every teen at some point.

Basically, Joy needs to get back and reboot Riley’s brain. But Riley’s a human being. You can’t just turn her brain off and on again. You need to go the long way, barefoot, schlepping five bowling balls and Sadness, who, as usual, refuses to walk.

By the end, Joy figures out what it is that Sadness does and why it’s important to get her up to headquarters too. If movies have taught us anything, it’s that if two people don’t get along, you should put them through perilous situations together. By the end, they’ll either understand each other or die trying. I think this is also the point of marriage.

What Joy discovers is that it’s important to be sad at times. You can’t be happy forever. Just because you ignore the feeling of sadness doesn’t mean that nothing sad will ever happen to you. And when it does, how will you be equipped to handle it?

Pain and loss happen to everyone. Sadness is not in itself bad. It’s the most therapeutic reaction to the bad stuff that happens. It’s therapeutic. Nobody wants to, say, throw up, but if you don’t when you need to, the bad stuff you ate is with you forever. It’s not enough to just cheer up your body by eating something that won’t make you throw up and avoiding the issue.

Yes, I know I’m talking about throw up. Disgust has a day off.

“Crying helps me slow down and obsess about the weight of life’s problems,” Sadness says.

“What good is that?” you wonder.

That’s how you figure out solutions. When you ask, “Why me?” you come up with an answer. Sadness is painful for the moment, but it’s good for the long run. Sadness is about achieving Joy in the future.

There’s a point in the movie where Bing Bong loses something forever, and Joy tries to cheer him up by tickling him. Whereas Sadness sits on the floor with him and agrees that it’s sad. She empathizes. And that works.

Emotions are meant to connect people together, and as far as that, Sadness is the most effective. Whenever disaster happens, that’s when people band together.

Joy is not equipped to deal with every situation. Nor is any one emotion. For example, in an attempt to make Riley happy, Anger implants a “light bulb” idea to run away from home, because apparently this light bulb always exists somewhere in every kid’s mind for some reason. Because trading one worry for several worse ones ever solved anything.

Comforting someone who’s sad and bringing them joy are not the same thing. Thinking they are, is a Facebook mentality, where someone posts, “My father died,” and then he sees, “38 people like this!” Two enthusiastic thumbs up! Comfort is not the same as joy.

Generally when someone dies, we sit shiva. Which has never really sat well with me (oy). What’s the point of shiva? Don’t you want to get your mind off your problems? I never know what to say at a shiva. How could I cheer people up? Someone died. I can’t just make jokes, no matter how appropriate and tasteful.

And the answer is that being sad with them is what they need. Sitting there for a week on the floor and just processing what happened allows them to move on, and just someone sitting next to you is enough sometimes. The more people who come, the more they shoulder your burden, until eventually enough weight is taken off you and you can stand up.

Sadness breeds empathy. Every decent movie contains some aspect of sadness or hopelessness early on. It’s how we connect with the characters and care about what happens to them later. We do the same thing at the Pesach Seder. We specifically start from the sad part of the story, because that’s how our kids – the audience – come to relate and care about the happiness at the end.

Everyone wants their characters to be happy, but if there were no sad parts at all, no one would watch. It would be like Caillou.

Shut up, Caillou. Nobody cares that you didn’t get as many cookies as your sister. That’s not a real issue. Nobody wants to watch you pout. You’re losing your hair over stupid non-problems.

What makes movies work – and Pixar movies in particular – is the balance of joy and sadness.

When you’re a kid, everything is one color. Broccoli is bad, because it’s green. Everything green is disgusting when you’re a kid, except boogers. But at the end, Riley (and Joy) learns about mixed emotions – that something can be both good and bad at the same time. Most things are not totally happy or totally sad. There’s such a thing as joy with tears in your eyes. And even broccoli has health benefits.

And that’s how Judaism works as well. Over the course of the year, we have six joyous holidays, but we also have six fast days. For every Rosh Hashana, we have a Yom Kippur. For every Pesach, we have a Tisha B’Av. Tisha B’Av is our Sadness. We sit on the floor, mope around, and are restricted to reading manuals about Tisha B’Av. But our tradition teaches that someday, Tisha B’Av will be the happiest on our calendar, and that only those who truly feel pain over the destruction of the Temple will be able to rejoice when we rebuild it.

In the movie, Joy tells Sadness, “You can’t focus on what’s going wrong. There’s always a way to turn things around.”

Yes, but sometimes you need to work THROUGH the problem. Not turn around and find a longer route whenever we hit a wall. We need to sit down and try to process that wall. Which is why sadness – sometimes – is the most important emotion of all.

Sidney Poitier and the Jewish Waiter who Taught Him How to Read
The Promise Of The Land
Which Chat Are You On?: Parshas Behar/Lag Ba’Omer
Do You Like Slow-Cooked Food? Thank the Jews
Comments
MOST POPULAR IN Art Smarts
Our privacy policy