Puncture: The Inside Story 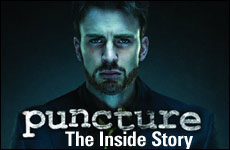 How I made a Hollywood movie with absolutely no Hollywood experience and a little inspiration from my rabbi.

Have you ever watched a movie -- one of those terrible movies -- and thought to yourself, “I could do that. I could make a movie. In fact, my life is so fascinating that it would make an incredible movie!” Come on, I know I’m not the only crazy person who thought that. What may make me different however is that I may have been one of the few crazy people who actually followed through.

Indeed, with absolutely no “Hollywood” experience, I just executive produced a movie called Puncture starring Chris Evans (Captain America) which will be in select theatres shortly.

My story began in, of all places, shul.

My story (the story behind the story that is) began in, of all places, shul. I was sitting in the children’s service when the rabbi came in to explain the Torah portion Lech Lecha to the kids. He explained how Abraham had a comfortable life making idols. But that God had commanded Abraham to “go forth”. The rabbi said that as Jews we have an obligation to try new things, take risks and make the world a better place. I thought about the rabbi’s lesson to the kids but realized he was really speaking to me.

I, like Abraham, had grown complacent. I was a successful attorney, had tried some high profile cases, but felt like there was more that I could do. In particular, thanks to one of the cases that I tried, I had an important story that I believed the world needed to hear.

Years ago, my partner Mike Weiss and I took on a case involving a local ER nurse who was infected with AIDS by an accidental needle stick. Once involved in the case I realized the significant issues involved including:

- Accidental needle sticks cause thousands of US nurses, doctors, and patients to be infected by AIDS, Hepatitis C and other infectious diseases every year;

- Large Group Purchasing Organizations are preventing new and life saving medical products from getting to market and costing the US health care system over $37 billion a year.

The case settled, but my mind never did. So in 2004 I decided to write an autobiographical screenplay about our case. I decided that our story needed to be turned into a film. There was a problem though: my screenplay was …uh…shall we say “weak.”

Undeterred, I hired a New York based screenwriter named Ela Thier to take my vision and rewrite it. And she did. Superbly.

Everyone I knew in the movie business told me that the only way to get your screenplay made is to find an agent who will show it to the right people. The last thing you want to do, everyone told me, was to send copies of your screenplay to production companies, movie studios and actors. That’s a complete waste of time. But that’s exactly what I did.

Ninety percent of the scripts that I sent out were returned to me unread. But I did manage to get two phone calls, and I flew to New York immediately to meet with both groups. By the end of the trip I had a deal with filmmakers Mark and Adam Kassen. The deal terms were that I’d give them a year and a half to rewrite the script, and try and attach a star and in return they would give me nothing. I know -- as a lawyer, not the best deal I’ve ever negotiated.

About 15 months later, they rewrote the script -- by Chris Lopata, and they signed an “A list” star -- Chris Evans. But there was only one problem: we had no money.

Mark and Adam Kassen told me bluntly, “If you raise the money, we’ll make the movie.”

And this brings us back to that day during the rabbi’s speech about Lech Lecha. I, like Abraham, had to take action. It was time to take a risk. At that moment, I decided that would put up the money to make the movie.

I realized that the money that I would put into this highly speculative and risky venture was like an idol - it had to be smashed. So I invested my money along with some additional capital that I raised from some friends to make the movie.

But as the saying goes, “rules are made to be broken,” and good thing they are. Puncture was admitted to the 2011 Tribeca Film Festival and selected to serve as one of the spotlight premieres. Millennium Films acquired the distribution rights and the film will open in select cities shortly.

So with this ten year movie making adventure coming to a close, I often find myself sitting in shul and wondering what lessons I’ve learned.

Well, I’ve learned that since we were exiled from the Garden of Eden, humanity has had to struggle. Struggle to do good deeds -- yes, but that is not enough. We must also struggle against injustice. We shouldn’t get discouraged if life presents us with seemingly insurmountable obstacles. We should face them fervently, because God has given them to us, and he knows full well that these obstacles are in fact very surmountable.

These are some of the lessons I’ve learned sitting through years of my rabbi’s sermons…and from making a Hollywood movie. So the next time you see someone dozing while the rabbi is talking, be sure to wake him up. He may be missing a life changing experience!

Puncture opened on September 23 in New York, Los Angeles and Houston and nationwide later in the fall.

Paul Danzinger is a partner at the law firm of Danziger & De Llano. He is also Executive Producer on the film Puncture starring Chris Evans. Paul is married to Dr. Susan Danziger & lives in Houston, Texas with their four children.

The Secret Chord: The Complex, Heroic Act of Forgiveness
The Blue Beyond
Great Place to Live
Is Eating Supposed To Be Spiritual?
Comments
MOST POPULAR IN Jewlarious
Our privacy policy