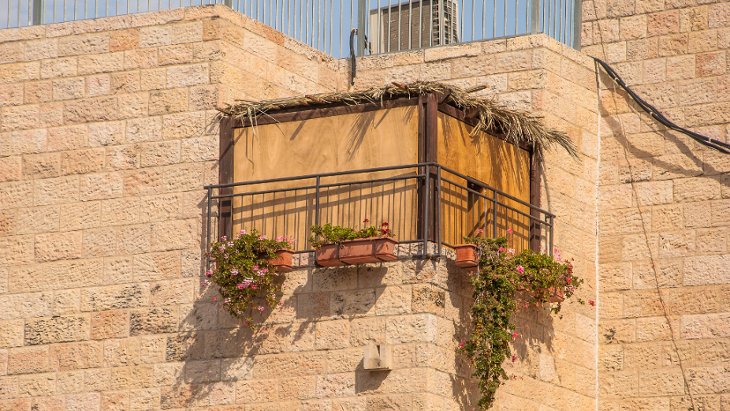 In Canada, Jews use heaters, in Florida, air conditioners, but at the core, it’s all the same.

We Jews take our holidays seriously. On Passover we get really serious about eating Matzah and on Sukkot we get serious about sitting (or even sleeping) in the Sukkah. And what’s beautiful about the Jewish people is that wherever you go in the world, we all celebrate. Sure the superficialities may be different, but the core principles are the same. So, because it’s what I do, please allow me to focus on the superficialities.

I saw my friend install air-conditioning in his Sukkah. When I told him it’s only for eight days, he told me it only takes him eight seconds to start sweating.

It’s cold in October in Manitoba. The Jews didn’t wander there on their way to Israel, otherwise we would’ve been building igloos with rooftops you can’t see stars through. Jews in the Great White North join in the festival in the cold, like us all. On Sukkot, Canadian Jews share our common belief that God will protect us and keep us comfortable, as long as we have fired up the right industrial strength surge proof heaters.

It’s not just Canada that gets cold on Sukkot. In Upstate New York, Chicago and even Moscow it’s all about your winter coat. The North Face has done wonders for many Jews on Sukkot. Granted, it’s hard to eat brisket with mittens. Nonetheless, we have faith. And I am happy as long as I am not eating soup with a beard and one of those Russian hats with the ear flaps falling in my split pea.

We don’t use heaters in the northern cities of the US, which is why we eat the honey really fast before the cold coagulates it. Truth be told, coagulated honey on Challah tastes amazing.

In some suburban communities around the world, it is a family tradition to celebrate the building of the Sukkah with a family fight. The fight generally starts with the misplacement of a plank and the yelling about why the B plank was not marked last year.

We gave up on the wooden Sukkah in my family. Instead, we went canvas. But each year none of us can figure out where the pipes go, as none of us are plumbers. Now, we’re fighting about how to twist pipe onto pipe. We’re just going to throw the schach on whatever we have, and fight about it over the duration of Sukkot. That’s our family tradition.

In England, the tradition is to eat inside the house. This is because it’s always raining.

In Israel, some people buy an apartment because of its Sukkah capabilities. This means that the porch is not under another a porch or covered by anything, as the schach should be the only covering that can separate you from the heavens. This way it’s a kosher Sukkah, and when it rains, you feel it.

When purchasing a home in Israel, you’re looking at the six-foot-wide porch. That’s the reason apartments in Israel cost over a million dollars. The porch. It has nothing to do with the inside. The goal is to not have to carry dinner down eight flights on the holiday. People visit and see a Sukkah porch connected to your kitchen, that’s gold. A fifteen square foot house with a twelve square foot porch? Millions. Anybody would trade a king size bed to seat twelve on a porch that isn’t covered by another porch for seven days.

To note, a good Sukkah can also be used as an extra room the rest of the year, which doesn’t get taxed by the municipality.

After Christmas, that stuff goes on sale and it’s Jewish. The most ultra-orthodox Jewish areas have great deals on Christmas decorations. Not that I am the most religious guy in the world, but I’m thinking it’s time someone tells the ultra-orthodox they should be celebrating Sukkot with a little less Santa.

The Pergola Sukkah of Modi’in Israel

All knew homes in this modern city are built with this. It’s similar to a skylight. Lift the roof and put it back down; just add schach. They have their Sukkah and no fights. This has become very popular in wealthy communities where people celebrate Jewish holidays by putting in as little effort as possible. These are the same people who celebrate Passover cleaning by abandoning their homes and going to a hotel for Passover. The same ones that celebrate Purim by purchasing pre-made Mishloach Manot gift baskets. The same ones that have children who are all smart and slender and get into Harvard.

Once the Sukkah is Built – What We Do

Moroccans Have a Lot of Traditions

Hang Elijah’s chair. This always bothers one guest who has to stand. First, he drinks Ben’s wine on Passover, and then he takes his chair on Sukkot. Ben was not happy. Some also hang rugs. If the rugs are thick enough, they may produce loose change and Lego pieces.

Ashkenazi Jews Do Everything the Moroccans Don’t

Ashkenazi Jews put up the seven species of Israel as decorations, and some even use gourds. I am not ashamed to admit it – I am Ashkenazi and I like food themed decoration.

Hang a Jar of Honey as Decoration

We hang a jar of honey in our Sukkah, to continue the blessing that our year should be full of annoying bees.

Chabad Chasidim Decorate with Nothing

That settles the argument as to which child’s project should be hung in the Sukkah. For years, the Sephardi and Ashkenazi Jews have been trying to figure out what to put in Sukkahs. The answer is nothing. No family arguments. No bees.

The reason Chabad chassidim don’t decorate is because the Sukkah is considered beautiful by itself. Apparently, they have not seen my uncle’s Sukkah.

Whatever you decorate your Sukkah with, Sukkot is a time of friendship so make sure to visit your friends and see how their culture does Sukkot. Visit your Hungarian Jewish friend in Brooklyn and see their Sukkah with a chandelier. See your Ukrainian friend’s Sukkah with wall trimmings and crown molding. Or go to your Indian friend’s Sukkah and see how much red and orange they use. Or go to Chabad in any of those places on the globe and see no decorations. No matter how you celebrate, just know, we’re all making our Sukkah our home.

Jewish Lords of the Dance

Passover Aftermath
The 21st President of the United States: Failure or Inspiration?
Hiding Their Jewishness
The Jewish Pope: Following the Questions Home
Comments
MOST POPULAR IN Jewlarious
Our privacy policy
Aish.com Is Looking for Great Writers