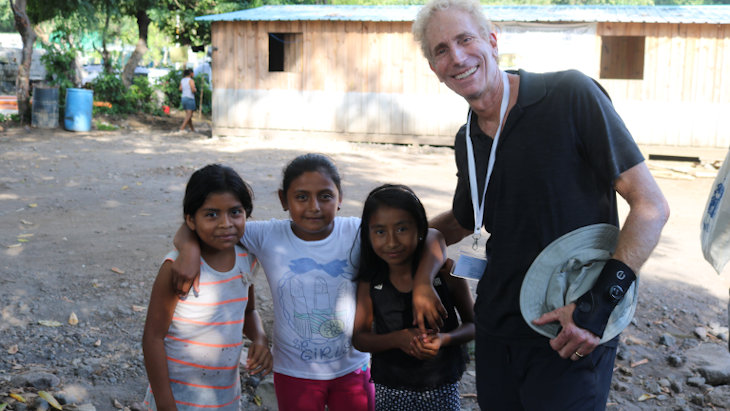 On my visit to see Israeli relief work in Guatemala, I was bowled over by the country's great affection for the Jewish State.

Being in the tourism industry, I have traveled to numerous countries all over the world, but no country left more of an indelible a mark on me than Guatemala. Its leaders and citizens exuded an abounding love of Israel and the Jewish People that I have not seen anywhere else.

At the Aipac conference, I heard a presentation from the NGO IsraAid which sends expertise of all kinds to support relief efforts all over the world. After hearing about the impact they were making on a limited budget I asked if it was possible to see their work first hand. They suggested I join a visit Guatemala where an IsraAid team was helping in the aftermath of a deadly 2018 volcano eruption. I readily accepted, packed my bags and took the flight from Miami to Guatemala City where I was met by an IsraAid representative.

The De Fuego volcano erupted on May 3 2018 sending rivers of smoldering ash into the plains and valleys below, destroying entire villages and resulting in 250 deaths. The region of Escuintla bore the brunt of the destruction with 12,800 people evacuated, thousands of them with nowhere to go, and housed in makeshift shelters. 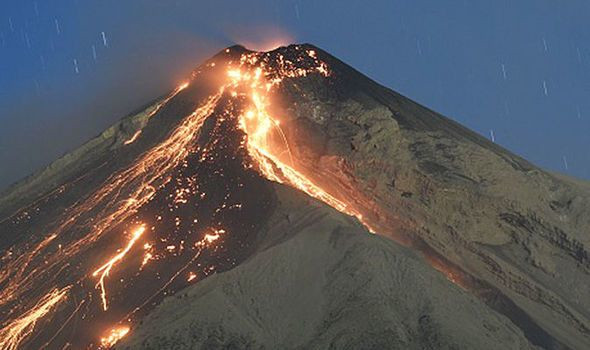 IsraAid was one of the first international teams to arrive, landing two days after the eruption. They distributed hundreds of urgent hygiene kits to families. With thousands of villagers reeling from the huge loss of life, homes and livelihood, a team of mental health professionals gave specialist trauma and bereavement training to 300 psychologists, nurses, shelter coordinators and volunteers. The IsraAid model is unique because they not only provide immediate disaster relief as other organizations do, but they also bring Israeli trauma experts in various fields to train locals on the ground so there is long term support for victims of a disaster. Now, 18 months later when the majority of external support had gone, the Israeli team was still there. They rotated their team, but since the disaster they had always maintained their presence there.

After the initial emergency relief, the IsraAid mission In Guatemala switched its focus to long term programming. I saw some of the 18 schools, where its teams are working with the national Education Ministry, supplementing the school day with afternoon clubs, and counselling services. 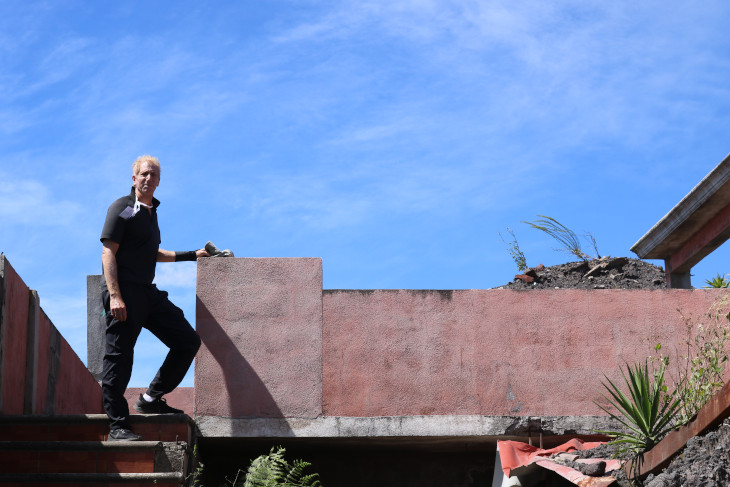 Bob Diener standing in what was once the living room of a family's home.

With difficulty containing her emotions, one lady showed us her home which had been completely destroyed. She showed us where her daughter slept and where they ate their meals. We saw an entire village destroyed by the eruption. We went to see the temporary wooden shacks where her family and others from the village were resettled. Nearby stood a community center built by IsraAid where children and teenagers go for emotional support and informal educational programs. The locals were so appreciative of this support. They understood that for a child to miss out on years of education or not receive psychological support for the trauma of losing family members and their homes causes a ripple effect of disruption that can last decades.

At an Israel Bonds dinner my grandfather took me to when I was a kid, I remember listening to Prime Minister David Ben Gurion who painted his vision of Israel being a moral and social beacon to the entire world. Seeing Israeli counsellors and youth leaders, over 10,000 miles from their home, supporting bereaved Guatemalan kids exemplifies Isaiah’s prophecy that Israel will be a light unto the nations. 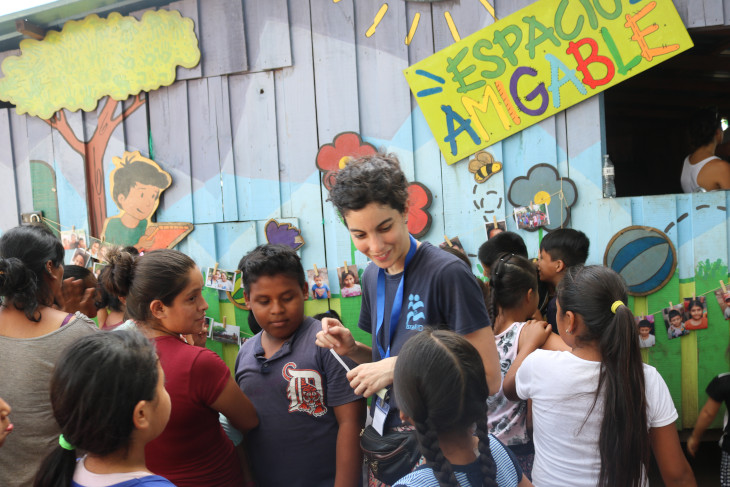 IsraAid worker with children in Guatemala

I learned that IsraAid teams are doing similar life changing work all over the world such as relief efforts in the Caribbean following Hurricane Dorian, in Mozambique following a devastating cyclone, and helping survivors of the recent earthquake in Indonesia which left thousands homeless.

Outpouring of love for Israel

The outpouring of love and appreciation for Israel was way beyond anything I have ever seen. Children waved Israeli flags, and wore t-shirts with the Israeli flag. It wasn’t a superficial show; authorities have named rebuilt roads in honor of Israel. We even visited one community that had rededicated itself as "The Israel community." It was a surreal experience. Here I am in the middle of Central America and there are people with shirts with the Israeli flag on all around me. 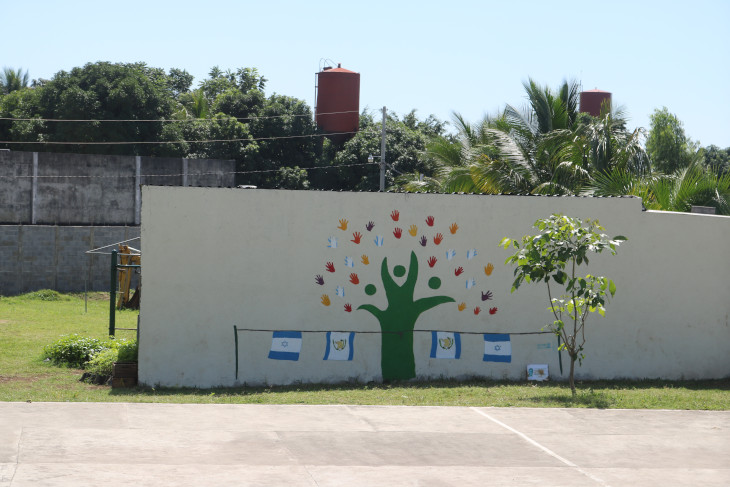 Flags of Israel and Guatemala painted by children

Having flown for meetings all over the world, inevitably I have found myself a little guarded, careful what I say, not knowing what kind of views people have towards Israel. Guatemala is one of the only places I have been to where I found I could express my own love for Israel without worrying about what reaction I would receive. Guatemalans gave me the feeling that I was among friends.

Intrigued by this phenomenon, I discovered that these local feelings did not begin as a result of IsraAid’s work. Perhaps the events of the last year had strengthened them, but the more I spoke to people, the more I discovered a country with a historic, deep-rooted support and friendship to Israel dating back over 70 years.

With a solid base of evangelical Christians, support for Israel runs through large parts of society. In May 1948, after the United States, Guatemala was the next country to recognize Israel after it declared independence. It’s then Ambassador to the United Nations, Dr. Jorge García Granados, organized a lobby of South American countries to support the November 1947 partition plan, playing a lead role in an additional 14 nations following Guatemala's lead in the crucial vote. Granados later became his country’s first ambassador to Israel. 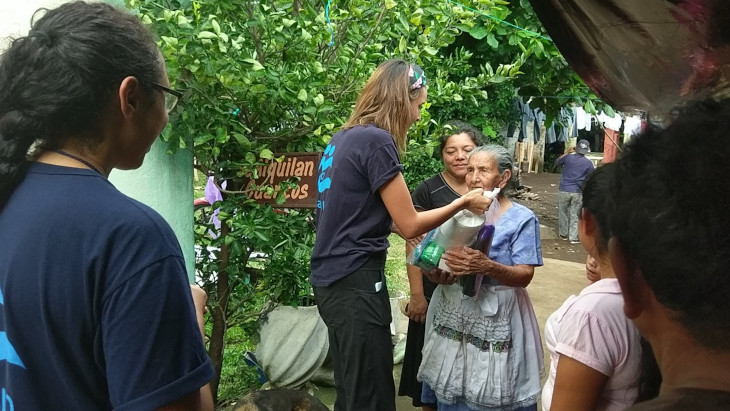 The Jewish community in Guatemala is made to feel very welcome, with anti-Semitism a rare occurrence. Guatemalan schools have a week set aside each year dedicated to Holocaust education, and in contrast to the situation in so many countries, the Israeli Ambassador Matanya Cohen has a kind of celebrity status - invited as a guest of honor to parties and major events. He told us, “Most Ambassadors have to deal with hatred, death threats and a political, diplomatic onslaught. In Guatemala it couldn't be more different.”

Meeting with the Guatemala Vice President

Guatemala was the first nation after the United States to relocate its embassy to Jerusalem last year. I was curious to find out how this evolved and met a local pro-Israel businessman in Guatemala City who had been instrumental in helping garner support for the embassy move. He arranged for a meeting with the country’s Vice President Jefeth Cabrera Franco and his chief of staff. 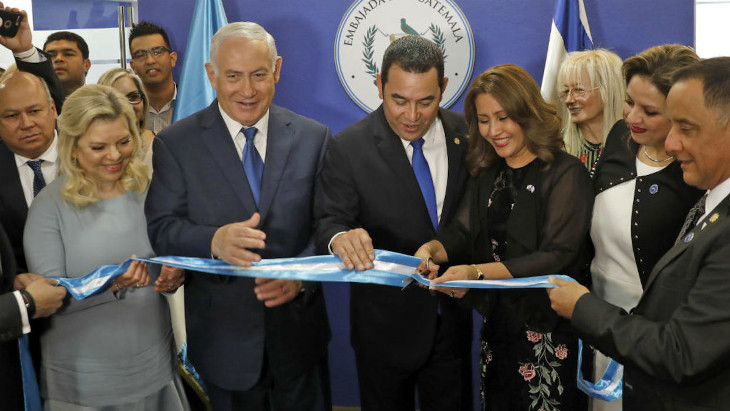 Guatemalan President Jimmy Morales Cabrera cutting the ribbon and the embassy in Jerusalem.

Inside the impressive national palace, I was escorted to the Vice President's office and was greeted with genuine affection. I thanked the Vice President for moving the embassy to Jerusalem and told him I was visiting Guatemala with IsraAid which was fulfilling the central mission of the Jewish people and the State of Israel – tikkun olam(repairing the world) and being a light unto the nations. He told me that his country is so appreciative of the help IsraAid is providing and that he is so incredibly proud of their decision to move the Embassy. He said ‘When the prime minister of Israel called for the international community to recognize Jerusalem as its capital, even though it was complicated, we overwhelmingly and instinctively wanted to do this. The question was perhaps more, how could we not do so?’

He told me that in honor of the embassy move, 14 streets all across the country had been re-named ‘Jerusalem, Capital of Israel Street’ and that many more are in process.’ I was speechless.

The Bible plays a central role in Guatemala where over 70% of the population is Christian. The blessing given to Abraham in the book of Genesis (12:3), that those who bless the Jewish People will themselves be blessed, is well known, and one that Guatemala’s leaders feel has been a tangibly good omen for them.

I was told that many Arab countries had threatened to cut their imports of Guatemala's leading export cardamom, which is the backbone of the national economy. 60% of the spice worldwide is produced in Guatemala. Although some nations did stop buying Cardamom following the embassy announcement, other countries quickly snapped up their allotment and were buying even more.

It was hugely inspiring for me to see a nation so far away from Israel geographically establish such deep ties with it. While I am always so shocked that the nation whose mission is to help the world is demonized by so many countries, I see hope for change after my visit to Guatemala. I no longer feel lonely as an American whose country stands behind Israel. My visit gives me hope that more countries will join the United States and Guatemala in expressing their support for Israel and the great values that it exudes: human rights, democracy, freedom of religion, freedom of speech, rule of law and tikkum olam.

Bob Diener is founder of Hotels.com and Getaroom.com. He practiced law with Gibson Dunn & Crutcher, managed a hedge fund, and regularly lectures at the University of Florida and Cornell Law School. He is also the former editor of the Cornell Law Review and is on KGO radio every Sunday morning.

Ari Fuld, My Hero
Blessing on Chewing Gum
Was Rahab a Prostitute?
Extras In Our Own Epic
Comments
MOST POPULAR IN Israel
Our privacy policy