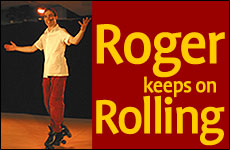 As Roger Mehl walks to rehearsal through the wet streets of Jerusalem, he almost blends into the winter night. Roger is no longer always in the spotlight; more often than not, he's another in the collage of Jewish faces. And that's just the way that he likes it.

"Some days I still feel like an actor," says Roger, a one-time international theater star, "but most days I just feel like a regular Jew."

During most of his young adulthood, Roger ran from one prestigious acting school to another, and from one country to the next, pursuing his theater career.

For so long, Roger explained, he was simply running from himself.

Now he's devoting his talents to Roll of a Lifetime, his one-man show that uses tap-dancing, roller-skating, and singing to showcase the ups and downs of his theater career, and how they eventually led to a reconnection with his Jewish roots.

Prior to rediscovering his love for Torah and meeting his wife, Roger's only love was theater. At age 16 he left his hometown of Toronto for a small-town dance school, and after high school he took off for the world-renowned London Studio Center.

During his time in London, Roger was an artist around the clock. Even when he was off stage, he admits that he was always playing a role.

"For those three years my happiness was completely based on finding success with my character," he says. "I was disconnected with any part of myself that wasn't involved with that particular role."

Along with everything else non-theater related, Roger's connection to Judaism (which he describes as "South African traditional," due to his parents' background), fell by the wayside.

After completing a three-year stint in London, Roger got his big break: Starlight Express in Germany, the Andrew Lloyd Weber musical and dance production performed completely on roller skates. Every night he was performing to a sold-out crowd of 2,000 in a theater specially built for the show.

Despite reaching his childhood goal, he felt painfully estranged from his roots. One day he just unexplainably burst into tears in the middle of the street.

The next day, he was rehearsing a challenging new jump: two spins in the air, and then landing on one foot, with the other foot suspended behind him.

"I hit the jump once, but the second time I landed on my inside wheel, forcing my ankle outward. I can still remember the sound. It was like crushing a bunch of bubble wrap in your hand."

Everything he had worked toward was slipping away.

As Roger lay on the floor paralyzed, the shock was so great that he felt no pain. But inside his head, his thoughts were racing. Everything he had worked toward was suddenly slipping away.

But in that moment, another equally persuasive message surfaced.

"There was another voice, which says, no pun intended, 'You really need this break.' I'd been working so hard as an escape, and I had no connection with family or friends, and no connection to Judaism. My whole life was about being a triple threat [singer/dancer/actor]. I knew I needed a break."

Fighting Back to the Stage

Roger had torn every ligament in his foot. The doctors were unsure if he would even walk normally again, not to mention dance. And as he lay in bed, he started to think about the other parts of his life that needed repair.

During his recovery, Roger started to mend his broken connections. He hobbled on crutches to a synagogue for Shabbat, and spent quality time with his mother for the first time since age16.

He also underwent six hours of daily therapy to heal his foot, and, against all his doctors' expectations, Roger was walking normally again after only six months.

Yet instead of furthering his search for deeper meaning, his first steps took him back into the dance studio. After working tirelessly to get back into shape, he returned to the London theater scene. In no time he landed a role as a Theater Royal York dancer. Suddenly, Les Miserables, Fame, and other West End shows were all showing major interesting him. Roger had fought his way back to the top yet again.

But rather than reveling in his return, Roger continued to experience strong feelings of emptiness.

"It was so anti-climactic. I was desperate to return, but when I finally reached my goal, I was totally dissatisfied. And I started to think again about those questions that I'd asked in the hospital bed: Who am I? And why, without the theater, do I feel I have no value?"

Roger decided that his need for deeper connection could no longer be pushed aside. He took what he called a "desperate act" and asked a fellow Jewish performer to light Chanukah candles with him. Later he pursued an opportunity to study Torah weekly with a local rabbi. And the more Roger learned, the more he felt the sense of connection and love that he was lacking.

With Torah I wasn't acting. I was really experiencing reality.

"Walking out of a Torah study session was the same feeling I got walking out of a good rehearsal," says Roger. "But with Torah I wasn't acting. I was really experiencing reality. It wasn't a pain killer. It was actually getting to the source."

And the Torah study gave Roger a chance to tap into his intellect in a manner he had never before experienced.

"For me the intellectual aspect was an incredible thing, because as an actor you don't spend time thinking in a straightforward way. Everything just comes from your heart. It's about intuition, body wisdom, and studying other people. But Torah exercised my brain."

Roger started taking care of his own needs, and spent less time performing for others. And the more he learned, the more he reveled in his Jewish identity.

"I started to see that to be a Jew means to be engaged in every aspect of life," says Roger. "As an actor you can experience different roles, but none of them compared to my experiences on Shabbat or the holidays."

Before long, Roger had more or less left his theater career, and had taken on a new role: that of an observant Jew. But despite his love for Judaism, Roger still sensed that an essential part of him had been left behind.

Roger experienced a breakthrough when a Jewish learning center that he attended asked him to MC an upcoming fundraiser, as well as to perform and tell his story. His act was a hit. In fact, it was such a success that the center offered to fund a full-fledged version of his segment, which was the impetus for his one-man show, Roll of a Lifetime.

Most importantly, Roger had found the bridge between his two worlds.

"It was an incredible fusion. I was working so hard in the studio to get back into shape, and then I would stop and pray, and then go back to rehearsal. I finally felt I had permission to be myself."

Another essential step in his growth at that time was meeting a young woman named Casielle, who had given up a professional dance career to pursue her Judaism. Roger realized that she understood his past, and shared his desire to pursue a Torah lifestyle. So when they decided to get married, it was appropriate that theirs would be a Jerusalem wedding, and that they would stay afterwards to study.

In the video, Roger is at the Western Wall, mouthing a prayer.

Before heading to Israel, they took a trip back to Toronto for an engagement party. During the party, they played Roger's bar mitzvah video. In one of the scenes, Roger is shown at the Western Wall, mouthing a prayer.

Roger explains: "I don't know why, but while I stood at the Wall I prayed that I would eventually come back to Israel, get married there, and raise my family there."

Roger traveled across many paths before his innocent prayer came to fruition. He and Casielle were indeed married near the Western Wall, just steps away from his bar mitzvah prayer. And instead of just coming for a visit, they have decided to stay in Jerusalem and raise their family.

Though Roger has stepped down from the big stage, he feels like life in Jerusalem with his wife and their baby daughter now contains so much of the depth and meaning he was always seeking.

Roger continues to perform his popular show, Roll of a Lifetime, and has also started a theater school in Jerusalem for religious actors to pursue the arts in a healthy atmosphere. For Roger, it's all about uniting his two worlds. He's using the best of his talents to inspire and entertain, while living a Torah lifestyle that connects him to the most meaningful parts of life.

"As an actor, you're only as good as the critics' reviews," says Roger. Here in Israel, I'm learning to become comfortable with the idea of people loving you, no matter what. And it's a lesson that's reinforced every day with my wife and daughter."

Judaism was a Darkly Kept Secret

One Non-Jew's View of Judaism

You've Got a Friend: A True Story about the Power of Connection

Me and the Moai: What Was I Doing on a Remote Polynesian Island?
Megillah Gorilla Saves the Day
Challah Reuben “Grinder”
Big OnThe Little Things
Comments
MOST POPULAR IN Spirituality
Our privacy policy
Aish.com Is Looking for Great Writers