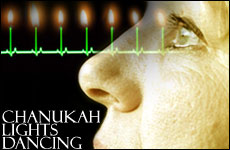 There is perhaps nothing as cold and terrifying as a midwinter night. Even the moon, usually low and welcoming, takes its retreat. It and its minion of stars glare angrily in the distance, the white light offering no respite. I think it is because of the intensity of the darkness that I have always found the candles of Chanukah so intriguing. Their tiny lights brazenly face the night's bitter challenge, and victorious, transform the harsh edge of fear into a soft caress of hope. Bathed in the candles' magical hue of triumph, the eight nights of Chanukah have always been a special time for me.

Oddly enough, none was more special than the one I spent as an intern on the oncology ward. It was December, six months into my internship, and I was bleary with exhaustion and staggering toward January -- my much awaited vacation. I remember thinking how apropos it was that during the darkest month of the year, I would be seeing patients dealing with probably the bleakest time of their lives. To alleviate some of the inherent gravity of the ward, the staff had attempted to infuse it with holiday cheer -- but the fluorescent lights had jaundiced even the brightest Xmas tree and Chanukah menorah, and all appeared sickly greenish.

After a few weeks of seeing so many tragic cases, and so much suffering, and now completely convinced that everyone I knew had an as-of-yet undiagnosed cancer lurking within them, my outlook became morose and depressed.

Until I met Claire.

A 57-year-old woman, she had been admitted for a two week course of chemo. Cancer has a nasty habit of revisiting its previous victims -- often with a far more lethal type, and two months earlier Claire had been diagnosed with a rare, aggressive blood cancer, just eight years after successful treatment for bone cancer.

These stark facts defined her medically, but they did not at all describe the whirlwind that was Claire.

When I walked in to her room, I was heartily greeted by a bright-eyed woman, wearing an orange turban, gigantic hoop earrings, and a huge smile.

“Hello! My new doctor!” she exclaimed and proceeded to fill me in on all the medical details she knew I would be asking. Clearly, she had been through this before.

“But now, tell me about you,” she smiled.

I was surprised. Understandably, patients in similar situations are typically reeling, and by necessity focus inward. But not Claire; she radiated outward with such genuine interest that I started talking. As I did, I noticed the myriad of photos that had already begun to fill her walls -- of old people, young people but always with Claire, grinning widely, lighting up the center. Somehow, in such a short time, she had managed to transform the drab, antiseptic hospital room to a place of color and warmth.

Over the next few weeks, I gravitated to her room. I met her husband of 35 years. A successful law partner, he was her perfect foil -- serious where she was light, reserved where she was effervescent -- always the straight man to her joke. But his devotion sparked in his eyes, and it was obvious how much he needed her. His taut jaw only slackened when he spoke to her, the warm loving tones reserved only for her.

I marveled how even through pain and fear, Claire seized life vehemently. She lit up her bleak circumstances, and in so doing challenged me to assess my own.

Her large group of friends was also very involved. I especially related to her two grown kids -- both in fledgling careers, her daughter with a young family back east, their drawn faces made it clear how torn they were between their many responsibilities and their hearts that were breaking.

When I became a doctor, I did it to give. I think Claire was the first patient to make me realize how much I would receive, and also, how much I would care. I marveled how even through pain and fear, she seized life vehemently. She lit up her bleak circumstances, and in so doing challenged me to assess my own. Her strength, wisdom and poise, and many others since her, has forever humbled me to the incredible radiance of the human spirit.

I will never forget my last night on call that month -- it happened to be the first night of Chanukah. When I went to visit Clare, she sat in a darkened room, transfixed by the plastic bulbs on the hospital's sterile menorah, sitting on the windowsill. “What a pathetic imitation,” I thought as I glanced at the menorah.

But Claire was thrilled. “I've always loved Chanukah candles. They are so hopeful.”

Only then did I notice how even the dim bulbs reflected on the window and seemed to glitter with the city lights beyond. She continued in a low voice, “You know, I wasn't supposed to make it last time…”

I did know that. Her oncologist told me that it was practically a miracle she had survived the first cancer, and that he was shocked at how well she was responding to this treatment. “These past eight years have been such a gift. We've traveled … I've gotten to know two grandkids…” Her voice wavered a bit. “I'll make it again, I know it.”

My throat caught, so all I could do was nod.

“Come look at these new pictures,” she brightened as she picked them up from her bedside. “Can you believe it? My husband planned a 35th wedding anniversary party -- he bought everyone these wigs so I wouldn't be alone.”

“A bunch of old, serious people in these silly wigs… It was so ridiculous! But, oh, how we danced …”

I looked and saw many of the people I recognized -- all laughing and wearing rainbow clown wigs. “A bunch of old, serious people in these silly wigs… We danced until one in the morning!” Claire shook her head, tears glistening in her eyes. “It was so ridiculous! But, oh, how we danced …” her voice trailed off.

And there we sat, into the night, looking at pictures of dancing clowns, lit by the weird orange blush of a plastic menorah.

The next day was the start of my vacation month. Claire was scheduled to leave as soon as her infection-fighting white blood cells had risen.

Four weeks later, after my vacation, I walked into the ICU for my next rotation. I blanched when I saw Claire's name on the board.

With dread, I looked through her chart -- my worst fears were realized. Her white blood cells had never rebounded, and left susceptible, she contracted one of the most deadly infections: fungal pneumonia. She had been in the ICU for three and a half weeks, in a coma for the past two, and was now on full life support. Fluid filled both her lungs, her kidneys had failed, and her liver was beginning to deteriorate.

I glanced over at her room and saw her husband, crumpled against the doorway for support. His clenched jaw and gaunt grey face made evident the horror of the past month, as he watched her, biting his lip. When I went to her room, he barely looked up, and shook his head. As I looked in, even I was shocked. Her room which once reverberated with laughter and light was now eerily quiet, save for the rhythmic wheeze of the ventilator. Bloated, bald and pale, she was completely still except for the forced ventilations. I gulped when my eyes fixed on the one bit of color in the room -- a picture of the laughing, rainbow-wigged dancers, taped to an IV pole.

Her husband whispered, “It's not working… the next time her heart stops, we're not going to resuscitate her. It's… it's time…”

I knew that with multi-organ failure like she had, it wouldn't take long, and it didn't. The next day her heart started to fail. When it gets into trouble, the heart sends out electrical signals of distress and the heart monitor's once dependable heartbeat line quivers uncertainly. After I saw that on the screen, I went in to tell the family it was happening, but they already knew and surrounded her bed telling her how much they loved her. I went back to the monitor. As a physician, there is nothing more surreal than watching a monitor as a patient dies. It is at once completely detached, yet also startlingly personal. As it gets more fatigued, the heart's line quivers more and more frequently, until, spent, the heart fibrillates its final goodbye, the line twitches furiously and then nothing … the line goes flat and that's it.

I went in to her room to pronounce her dead. Even before I put my stethoscope on her silent chest and felt her cool pulseless wrist, I knew the spirit was out of her body. I shivered, however, when I realized I could feel her sweet essence still lingering around us.

I hugged the family and left.

Even now, over ten years later, on the first night of Chanukah, after the latkes are eaten and the presents are opened, I sit in a darkened room and watch as the candles burn down. I strain to hear the tiny “sss” as the last wisp of smoke fills the air with its sweet burnt essence. The best part, though, is right before the candles succumb and are still lit. I am amazed that as they face the coming darkness, perhaps in spite of it, they glow so brilliantly. And that even as they approach the very end, they continue to flutter and dance. And, oh, how they dance.

A Jewish Child on Christmas

Feeling Like I'm the Only Jewish Girl in the World
Megillah Gorilla Saves the Day
Challah Reuben “Grinder”
Big OnThe Little Things
Comments
MOST POPULAR IN Spirituality
Our privacy policy
Aish.com Is Looking for Great Writers