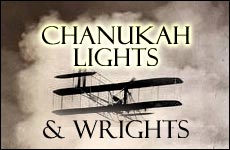 The menorah's flames remind us that technology is but a gift from God.

A large box-shaped contraption with wooden propellers teeters on a 200-foot wooden launching track. Engine roaring, the rickety machine suddenly lurches forward. As it chugs down the track, onlookers hold their collective breath. This is what history feels like.

The flimsy flyer picks up speed. It rises an inch… two inches… six inches... and then -- PLOP! Twisting awkwardly, it belly-flops into a muddy puddle.

It is 100 years to the minute since the Wright Brothers made their historic flight ushering in the Age of Aviation, indeed ushering in a New World. Witnessing the spectacle are 35,000 people, not the mere seven (including the Wright Brothers) who were present in 1903. The wreck lying in the puddle is not the Wright Brothers' "Flyer" (as they called it), but a $1.2 million replica. Nevertheless, the lesson is timeless: Even 100 years of science and experience do not guarantee success or achieve Technological Man's ever-fleeting goal of absolute control. A mysterious factor, independent of human will, that can neither be foreseen nor calculated -- "timing" or "luck" some would call it -- is an intimate companion with progress.

December 17, 1903 occurred on the 28th day of Kislev, the fourth day of Chanukah. It's not a coincidence. There's a profound lesson to be learned.

The Wright Brothers' achievement did not originate in a vacuum. The dream of flight had occupied the imagination of humans for thousands of years. Greek mythology concocted Pegasus, a winged horse which the king's son rode into battle. Alexander the Great was said to have harnessed mythical winged animals, Griffins, to fly around his realm. (The Talmud, too, claims that Alexander ascended into the air and realized the Earth was round like a sphere.)

The Sages of Jewish mysticism predicted the Industrial Revolution.

Yet if it was millennia in coming, it was no surprise to the Sages of Jewish mysticism, who long ago predicted the dates of the Industrial Revolution:

"In the 600th year of Noah's life... all the fountains of the great depth were broken apart, and the windows of heaven were opened..." (Genesis 7:11)

"[This means that] in the year 600 of the sixth [millennium], the gates of wisdom above and the wellsprings of wisdom below will be opened, and the world will prepare to enter the seventh [millennium], just as a person prepares himself toward sunset for the Sabbath." (I Zohar 117a)

The Jewish year “600 of the sixth millennium" corresponds to the year 1840, which uncannily coincides with the Industrial Revolution. Long ago, therefore, the Zohar predicted that in the 1800s of the Common Era the world would be flooded and transformed by the "wellsprings of wisdom below." And this explosion of knowledge continues today, getting stronger with the passage of time, like the floodwaters of Noah piling upon each other.

Of course, during that same time period, belief in God has been challenged like never before. One reason is that advances in technology give humans such control over their environment that they might think they don't need God. Perhaps the apex of this hubris was expressed by Soviet Cosmonaut Major Gherman S. Titov, when he returned from orbiting the Earth in 1961 and triumphantly announced that he hadn't seen God. (Of course, had he stepped out of his spacesuit, he surely would have!)

When the "wellsprings of knowledge" burst into the world in the 1800s, it presented a great challenge to humanity. Would the great control over nature lead humanity to replace God in heaven with the gods of technology? Or would they progress with humility and respect for the Maker of Heaven and Earth?

A Flying Tower of Babel

The roots of this choice can be found in the Tower of Babel:

"Come, let us build a city, and a tower, with its head in the heavens, and we shall make a name for ourselves" (Genesis 11:4)

The Midrash teaches that what they really meant was, "We refuse to accept God or His rule. Let us make a name for ourselves." Rabbi Yonason Eibeschutz, an 18th century sage, made a remarkable comment on this passage. He said the Tower of Babel was actually a ship designed to fly up into the heavens!

Many times, especially over the 20th century, there have been loud and unmistakable reminders that self-reliance has gone too far. The Titanic, the largest, most advanced ship of its day, was thought unsinkable. "Even God Himself could not sink this ship," people remarked.

They slipped the surly bonds of earth to touch the face of God.

In the latter half of the 20th century, arguably no event shook the confidence of technological man like the disaster of the space shuttle Challenger. Millions of people had their eyes glued to the event, as it featured the first civilian, Christa McAuliffe, who would teach science lessons from space. 1986 had been dubbed the “Year for Space Science" -- the year that Halley's Comet would be observed, the Hubble Telescope was put into orbit, and no fewer than 15 shuttle missions flown. It was a banner year for technological advancement.

And then the Challenger blew up. The remaining shuttle missions were cancelled, and the entire space program questioned. 1986 turned out to be the year of the humbling. The astronauts, President Reagan explained to a grieving nation, had "slipped the surly bonds of earth to touch the face of God."

Coming as it did literally on the wings of the Industrial Revolution, manned flight is arguably the pinnacle of technological achievement. If so, it is fitting that this breakthrough took place during Chanukah, because the message of Chanukah is that God, not human beings, controls events and nature. This can be seen in the two "miracles" of Chanukah: the military victory over the Greeks, and the oil that burned eight days.

On Chanukah we celebrate the victory of a small band of Jewish fighters over the Greek superpower of its day. The weak vanquishing the powerful reminds us that the victory of one army over another does not ultimately boil down to military might and technology. (The Greeks possessed the super-weapon of its day, the elephant.) Victory and defeat are outer shells of events determined by a deeper inner reality, God's will.

Similarly, the ability of oil to burn is not a law of nature, per say, but an expression of God's will. This is conveyed in a Talmudic story about Rabbi Chanina ben Dosa.

One evening, Rabbi Chanina's daughter said, "We have no oil to light candles."

"Do we have vinegar?" he asked.

"So let He who tells oil to burn, now tell vinegar to burn."

She lit the vinegar and it burned.

Why does oil burn, but not vinegar? Is it really the "nature" of oil to burn and the "nature" of vinegar not to burn? From Rabbi Chanina's perspective, oil burns not because of any "law of nature," but because God determines that it do so, each and every time a person ignites it.

This, too, is the message of the Maccabees recapturing the Temple and lighting the menorah. According to the laws of nature there was enough oil to burn for only one day. But nature is nothing but the will of God repeated in a predictable ways. If God's will is for the unpredictable -- the “miraculous” -- then oil meant to burn for one day will last for eight.

In a deeper sense, this is what we are supposed to see when gazing into the hypnotic glare of the menorah lights. We see a world where the physical is really only the outer garb for an inner, spiritual essence -- the "will of God."

Even technological achievement, the epitome of human ingenuity and control, demonstrates this. After all, who puts the thoughts in a person's mind to invent a new machine? Indeed, the Wright Brothers didn't even have a high school education, yet they -- and not the scientists and PhD's pursuing the dream of flight for decades -- discovered how to fly!

Wright discovered a key principle of aerodynamics while absent-mindedly playing with a cardboard box.

Further, we so often see that invention is the product of "luck" and "chance." Wilbur Wright discovered a key principle of aerodynamics, "wing warping," while absent-mindedly fiddling with an empty, rectangular, cardboard box in his shop while attending to a customer.

And how often has it happened that just when we think we've finally achieved full technological control, some disaster results.

Modern technology is a double-edged sword. Reaching for the heavens is a lofty, noble idea. Yet if it becomes a way to storm the heavens and challenge God's dominion, it ultimately has no chance of success.

God is not disproved by Science. Science is another name for the gift of mind and spirit to His creations to help them create through their own efforts a better life.

Nature is a puppet attached to the strings of the Master. It is a mask hiding the Face of God. On Chanukah, we try to peel back the mask and see that the miraculous is present, prescient, embedded, imminent and revealed.

And if we can see beyond the often-blinding earthly light, we will be privy to a vastly more beautiful light, the Divine light, aglow in the menorah's flickering, eternal flame.

Power of the Menorah

Rekindling the Sparks of Peace

Give It All You've Got
Seeing Without Eyes
Why Shouldn’t We Eat Whatever We Want?
The Power Of Prayer
Comments
MOST POPULAR IN Chanukah
Our privacy policy
Aish.com Is Looking for Great Writers