Dancing with the Rebbe 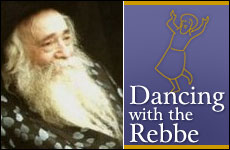 My father died just before Simchat Torah and I couldn't bring myself to join the others in dancing. Then I remembered the following incredible story.

Nineteen years ago, my 64-year-old father, of blessed memory, passed away rather suddenly just before the High Holidays. Needless to say, it was difficult for me to concentrate on my prayers appropriately. When Simchat Torah came, I couldn't bring myself to join the others in my synagogue who were dancing with the holy Torah scrolls. So there I stood in a corner, feeling sorry for myself, and then I remembered the following incredible story.

One of the many great heroic personalities to emerge from the Holocaust was Rabbi Yekusiel Yehuda Halberstam, the hassidic grand rabbi of Klausenberg, Romania. Before, after and even during the most hellish experiences he suffered at the hands of the Nazis, the Klausenberger Rebbe was loved and revered for his sheer genius, his selfless devotion to the welfare of the most unfortunate, his piety and his courageous leadership.

Due to his pre-war reputation as a great rabbi, people were attracted to the rebbe and sought his advice and guidance even within the camps. This was not lost on the Germans and they treated the rebbe with special beatings and particular cruelty. The rebbe risked his precarious health by not eating any food that wasn't kosher or which may have been prepared together with non-kosher food and would regularly use his tiny allotment of drinking water to wash his hands before eating bread, all the while urging others to preserve their own lives by eating anything they could get their unwashed hands on, kosher or otherwise. His admirers and followers sought to protect the rebbe and would risk their lives to help him in any way that they could. They would often make it possible for him to keep Shabbos and Jewish holidays by taking on his workload in addition to their own.

It once happened that the rebbe was able to avoid working on the last days of the Sukkot holiday due to the creative designs of his devoted bunk mates. But somehow the Germans got word of the ruse and forced his followers to watch as they proceeded to administer a savage beating so violent that no one thought the rebbe could survive its ferocity. The Nazis would not allow anyone to go to Rabbi Halberstam's assistance, even after they were done with him, and they marched everyone out to work, leaving the rebbe in a broken heap on the barracks floor.

As night fell, the Jewish prisoners were marched back into their barracks expecting to mourn the rebbe's untimely passing. Instead, they found that their master had miraculously dragged himself over to a post, clawed his way up until he was nearly standing and was swaying back and forth while moving his lips in the hoarsest of whispers. "Rebbe what are you doing?!" his followers exclaimed. "Let us help you down so you can rest!"

The rebbe waved them off. "Children, tonight is Simchat Torah," he murmured. "Come dance with me."

I waded into the revolving circle of men who were clutching the Torah to their hearts, and on that particular Simchat Torah night, I walked round and round while in my mind I danced with the rebbe.

The Benefits of Keeping Shemittah
How a Spate of Synagogue Bombings in the 1950s Is Impacting Us Today
Portion Control
This Is How Your Marriage Ends
Jewish Asian Fusion Recipes
A Rabbi Walks Into A Bar
Take Two: Why Pesach Sheini is Significant to Our Family
One Drink Too Many: My Journey of Breaking Free from Alcohol
Should Jews Support Ukraine?
The Jewish Trader called “One Tongue” by Native Americans
1 2 3 … 2,979 Next »