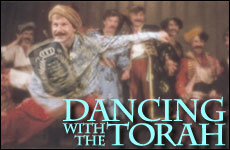 He came by my house every six months or so, for a modest contribution to support the immigrant village he helped build in Israel to absorb new arrivals from Russia. His excited, high pitched voice and happy, dancing eyes belied the deep furrows in his brow which were painfully etched by decades of punishment at the hands of the communist authorities for the terrible crime of being an observant Jew in the Soviet Union during the 50's, 60's and early 70's.

It became a ritual. I'd ask the diminutive rabbi if he'd like a bite to eat. He would always counter in his Russian accented Yiddish, "Perhaps, just a glass tea." My wife would serve him a steaming cup of dark orange brew along with a generous slice of home made cake, both of which seemed to help straighten his sagging shoulders just a bit. Trudging door to door for small donations, it had certainly been awhile since his last square meal.

He looked up at me and smiled broadly. "Did you know there was such a thing as a Cantonist Shul?"

I remembered stories I heard as a child which described some of the darkest, but most heroic days in Jewish history.

They would be kidnapped from their parents' home, tortured repeatedly until they either accepted Christianity or died of their wounds.

The Cantonists were Jews who from 1825-1840 were forcibly conscripted into the Russian Czar's army from as early as the age of 10, and obligated to serve for 25 years. The authorities saw it as a corrective, forced assimilation of stubborn Jews into Russian society. They would be kidnapped from their parents' home, tortured repeatedly until they either accepted Christianity or died of their wounds.

They were starved, beaten and lashed, often with whips fashioned from their own confiscated tefillin. In their malnourished states, the open wounds on their chests and backs would turn septic and many boys, who had heroically resisted renouncing their Judaism for months, would either perish or cave in and consent to the show baptism. The Czar would have only reliable Christian Russians defending the motherland.

To avoid this horrific fate, some parents actually had their sons' limbs amputated in the forests at the hands of local blacksmiths, and their sons -- no longer able bodied -- would avoid conscription. Many other children tragically committed suicide rather than convert.

Even the brave few survivors who secretly maintained their faith and managed to return to their families 25 years later, by and large found themselves shunned as traitors to Judaism.

"The Cantonists actually did have a shul of their own," the rabbi continued. "After all, they had nowhere else to go."

"My grandfather told me that he once attended the Cantonist Shul on Simchat Torah. The Cantonists could dance like Cossacks. They were huge, strong men, and the heavy Torah scrolls would seem like toothpicks in their arms. They effortlessly danced on for hours on end. Although they were looked down upon by other Jews, and they were not very learned and really couldn't observe the Torah properly, they were nonetheless able to rejoice in their Judaism and celebrate the Torah. It was truly amazing."

He paused long enough to dip a sugar cube into the still hot tea cup, placed the cube in his mouth and swallowed another long swig of the tea.

"Then for the final hakafah (circuit around the synagogue's central lectern), the Cantonists, as if on cue, suddenly removed their shirts in unison! With the Torahs held tightly to their bare skin which was covered with the ugliest welts and scars you ever saw, they danced around even more energetically. Their smiles were now giving way to streams of tears as they looked out into the crowd of assembled Jews, as if to say, 'You may have studied and observed this Torah, but we gave our bodies and our lives for it. The Torah is at least as much ours as it is yours!'"

As he put the tea cup down, he couldn't hide the tremor in his hand which caused a rattled meeting of cup to saucer.

Wiping away a tear with his napkin, he said, "In democratic America it is so easy. Yet so many say, 'It's so hard.' Go figure."

Up Against the Wall: The Remarkable Odyssey of Arye Steinberger’s Sukkah Art
What Makes Eli Run?
The Tyranny of Materialism
Science Enters the Mysterious Inner World of Consciousness
Comments
MOST POPULAR IN Israel
Our privacy policy