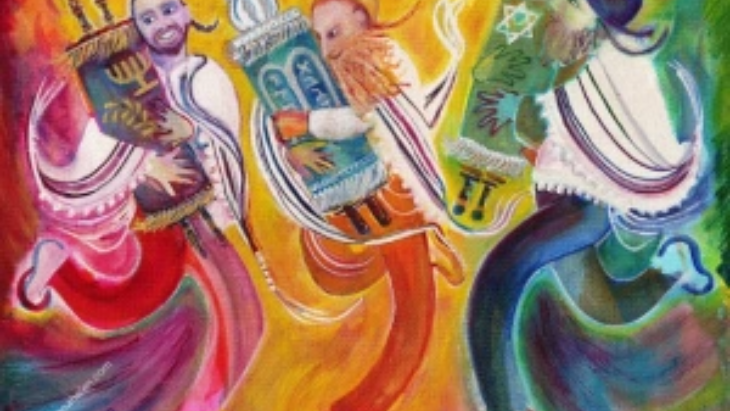 Amid rising anti-Semitism, the People of the Book rejoice with the Torah.

On Oct. 14, 1663, the English civil servant Samuel Pepys decided to pay a visit to the Jewish synagogue in London’s Creechurch Lane. Jews were a novelty in Restoration England. They had been expelled from the realm nearly four centuries earlier, and it was only in 1656 that they had once again been permitted to live on English soil. Pepys, knowing nothing of Judaism, wasn’t aware that his excursion happened to coincide with the most euphoric day in the Jewish calendar – the festival of Simchat Torah, or “rejoicing with the Law.”

What he saw bewildered him.

“But, Lord!” he recorded in his famous diary, “to see the disorder, laughing, sporting, and no attention, but confusion in all their service, more like brutes than people knowing the true God, would make a man forswear ever seeing them more and indeed I never did see so much, or could have imagined there had been any religion in the whole world so absurdly performed as this.”

What Pepys had unwittingly walked in on was a celebration of the oldest love affair in history – the infatuation of the Jewish people with the Torah. In Judaism, there are no saints to adore or icons to venerate. Rather, there is a book to study and teach: the scroll of the law, the Torah given by God to Moses and the Israelites at Mount Sinai, the essential text with which Jews have engaged intellectually and been sustained emotionally for more than three millennia.

Simchat Torah occurs on the last day of a three-week sequence of fall holidays. It follows Rosh Hashanah, Yom Kippur, and Sukkot. Unlike those holidays, however, Simchat Torah is not biblically ordained. It was not imposed by religious authorities from the top down, but grew organically from the bottom up. Its roots reach back 15 centuries to the ancient Jewish community of Babylonia, which formalized the practice of publicly reading the entire Torah – from the beginning of Genesis to the end of Deuteronomy – over the course of a year. The completion of the annual cycle became an occasion of joy, marked by singing and dancing around the synagogue with the Torah scrolls. Adults and children alike take part in the festivities. And as soon as the final verses of Deuteronomy are chanted from the end of one scroll, another is opened and the first chapter of Genesis is chanted: “In the beginning, God created the heavens and the earth.” The Jewish engagement with the Torah never ends; as soon as we finish, we start again.

The “people of the book,” Jews are called. The phrase comes from the Koran, where it appears 31 times – an apt emphasis, for no nation has ever been as closely identified with a book as have Jews with the Torah. Sacks notes that by the time Simchat Torah had spread throughout the Jewish world, Jews had lost everything that would seem indispensable to national survival: land, sovereignty, political freedom, a military. Yet they still had their book to study and teach and rejoice with. Somehow, that was enough to keep Jewish peoplehood alive.

Three centuries after Pepys made his diary entry, another renowned writer encountered Jews celebrating Simchat Torah. In 1965, Elie Wiesel traveled to the Soviet Union, where Jews lived in fear and religion was repressed. And yet, he discovered, on one day of the year – Simchat Torah – throngs of young Jews streamed to the remaining synagogue in Moscow, bravely defying the KGB to openly celebrate their Jewishness.

“Where did they all come from?” he marveled. “Who told them that tens of thousands of boys and girls would gather here to sing and dance and rejoice in the joy of the Torah? They who barely know each other and know even less of Judaism – how did they know that? I spent hours among them, dazed and excited, agitated by an ancient dream.” It was a harbinger of the coming struggle to save Soviet Jewry, which would eventually crack open the Iron Curtain and change the trajectory of the Cold War.

Simchat Torah returns this week amid a rising global tide of anti-Semitism. One year after the Tree of Life massacre in Pittsburgh, and just days after the Yom Kippur shooting in Halle, Germany, Jews increasingly require police protection when they gather in prayer. Nevertheless, synagogues the world over will be filled anew with the same euphoria that so startled Pepys and amazed Wiesel. The People of the Book will once again rejoice with the Law, dancing with the scrolls that have been, for 33 centuries, the ultimate source of their identity and strength.

This article originally appeared in the Boston Globe

Artwork above is by Chana Helen Rosenberg. Visit her site at www.chanahelen.com

Dancing with Our Children
What Does Kosher Mean Literally?
Live Abortion Panel
Morality and Abortion: Three Views
Comments
MOST POPULAR IN Jewish Society
Our privacy policy