Up Against the Wall: The Remarkable Odyssey of Arye Steinberger’s Sukkah Art 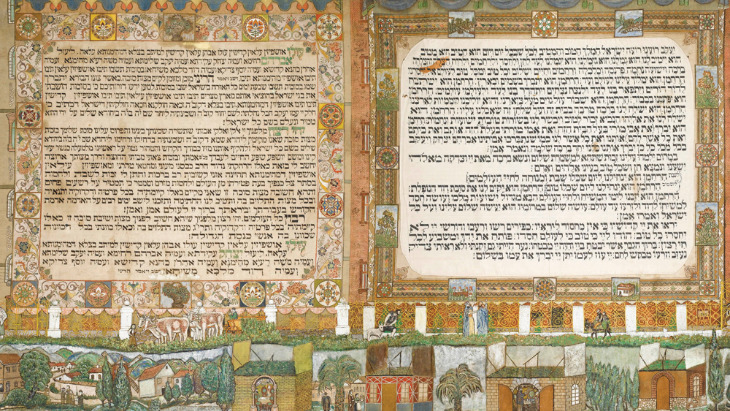 Spanning numerous countries and generations, the incredible art mirrors that of the Jewish people. Both have survived against all odds.

Arye Steinberger was born in the village of Olaszliszka, Hungary, in 1859. A blood libel resulted in recurring pogroms in the area, driving Steinberger and his family to wander, eventually settling in Budapest in 1906. 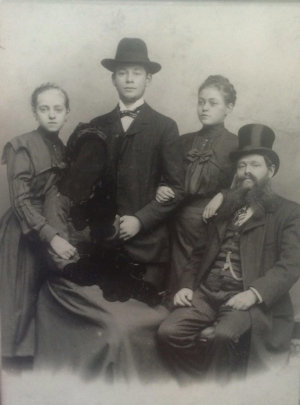 Arye Steinberger with his three children (left to right), Gisella, Salomon, and Regina, circa 1900.

Arye became a central pillar of the community. He was a shohet, a ritual slaughterer, well-versed in Jewish law; a teacher steeped in Bible stories and legends that drew children into Jewish tradition; and a cantor, deeply committed to prayer who never spoke in shul. But Arye was also a talented artist and scribe. He was self-taught, but his calligraphy was flawless, and his piety renowned. His love of letters was rooted in Jewish mysticism; he was well acquainted with the Zohar, including the section dealing with palmistry.

At 65, Steinberger retired from slaughtering and dedicated himself to the scribal arts. For the family he produced an illuminated Haggadah and a scroll of Esther. And to provide for his three granddaughters’ dowries, he wrote three Torah scrolls. One remains in the family, used for bar mitzvahs. But his pièce de résistance, years in the making, adorned the Steinbergers’ wooden sukkah. 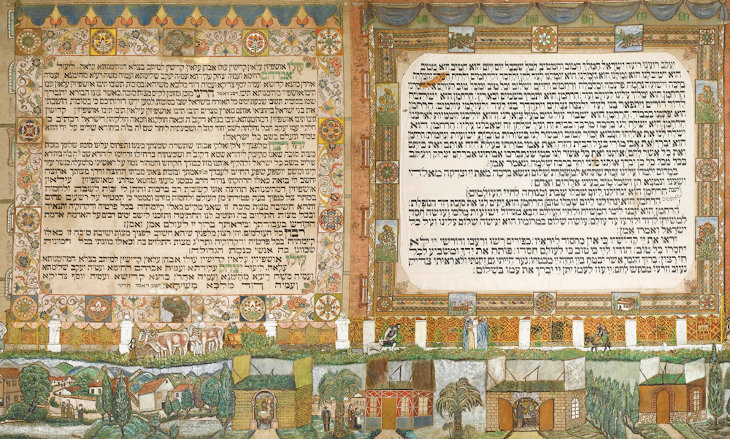 First sukkah panel: blessings before waving the four species, and prayer for redemption recited when sitting in the sukkah. The right-hand border depicts a typical Budapest apartment block, an exotic mix of east and west.

Combining calligraphy and folk art, these four canvas sheets contain every prayer recited within the sukkah. The blessing for entering the structure, grace after meals, the kabbalistic meditation and blessing before shaking the four species, passages from Hallel (the psalms sung on festivals) – all are boldly inscribed within decorative borders. Beneath and interspersing these texts are illustrations depicting the life and dreams of Arye Steinberger. Some scenes are from Budapest, others from his native countryside.

One panel recreates the elegant gold railings and gates of the Dohaney Street synagogue, the first in Pest, topped with a Hungarian flag. Dark green cypresses all but wave in a breeze, and palm trees – out of place and drawn from pictures – symbolize the distant land of Israel. Biblical tableaux feature the seven mystical guests welcomed into the sukkah each night of the festival: Abraham, Isaac, Jacob, Joseph, Moses, Aaron, and David.

Among the lush, green, meadows, wooded hills and valleys, bridges, and old, walled towns of Hungary, Steinberger placed his friends and family. At first their faces are blurred, in keeping with the biblical ban on human images; as time passed, however, and it became more important to Steinberger to people the sukkah with his nearest and dearest, he consulted his fellow scholars and the rabbis of Budapest, and details were added. In one pastoral moment, he captured granddaughter Piroska almost knee-deep in grass, holding her firstborn, Jehuda. Arye (lion in Hebrew) also “appears” on every panel, represented by a lion. 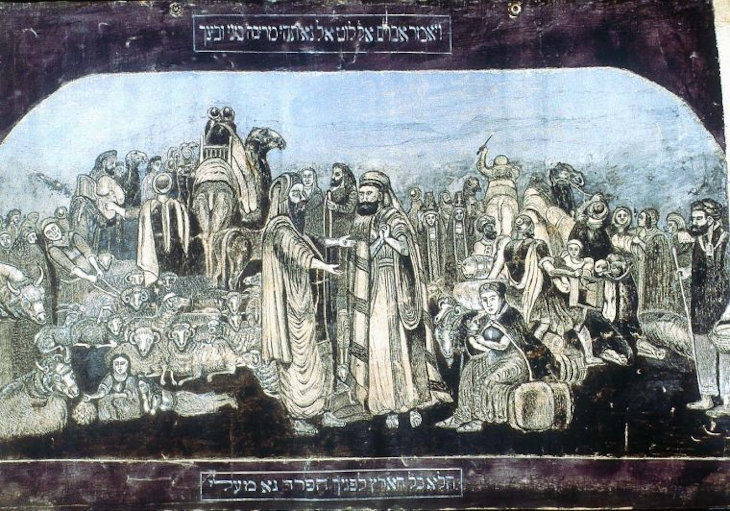 Steinberger painstakingly mixed colors and inks, using pine sap to fortify them against the seasonal rains to which the sukkah stands exposed.

Every year, Arye’s masterpiece lined the walls of the family sukkah on his daughter Regina’s balcony, making it a focal point of Budapest’s shrinking Orthodox community and attracting long lines of eager visitors that snaked out of the apartment and downstairs to the street. Arye died in 1942, blissfully oblivious to the approach of war. A year and a half later, the Nazis invaded Hungary.

No Place for Jews

At first Budapest was safe compared with the countryside, where Jews were quickly and efficiently rounded up and transported to Auschwitz and extermination. Nonetheless, Regina’s son Andor Platschek presciently buried the sukkah panels in the cellar of the Doheny Street synagogue for safekeeping.

Like many Jews in the city, Piroska Lindenblatt survived the war with her three young sons in the Glass House, a disused glass factory whose Jewish owner had turned it over to the Swiss consul, Carl Lutz. After the war, the remains of the family regrouped in Budapest. Andor went back to the Dohaney synagogue and recovered the sukkah panels, which were transferred to Piroska after their mother moved into an old age. 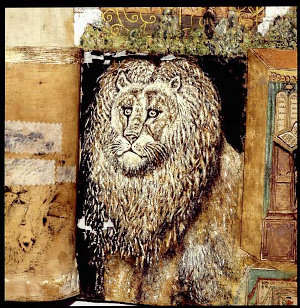 After the Soviets took over Hungary, Piroska and her husband, Jeno, stayed in Budapest, struggling to feed their family and remain Orthodox. Jeno ran a poultry business, and Piroska sold hand-painted kerchiefs. Any regular employment meant working on Saturday. A fourth son, Paul Arye, after his grandfather, was born in 1946.

On October 23, 1956, when Paul was ten, Hungarian nationalists rebelled against the Soviet Union and a rare window of opportunity opened, although Soviet tanks soon crushed the revolt.

In early November, Jehuda, the eldest Lindenblatt child, stole across the border into Austria with a friend, and from Vienna they traveled to Israel. In the throes of the Suez crisis, Jehuda volunteered as a paratrooper. Some two weeks later, 18-year-old George headed for England. After begging Piroska and Jeno to trust him with their third son, Robert, a family friend sailed with him to America.

Left alone with his parents, young Paul was in charge of the family radio. Every day, Radio Free Europe broadcast messages to Hungary, and eventually he heard one in Yiddish from his uncle Andor, telling them the boys were safe. Andor himself was in Vienna, determined to get his sister out of Hungary and reunite the family.

At the beginning of December, two men arrived at the Lindenblatts’ door in Budapest. They’d come from Andor, they said, and the family should be ready to go at 5 the next morning, when a truck would take them over the border to freedom. Heated debates ensued – whether to go, what to pack – but in the end, the die was cast for leaving.

At left: Meditations for sitting in the sukkah and hosting the seven guests, each representing one of God’s attributes – country scenes give way to family portraits and Jewish rituals. Piroska Lindenblatt is painted at left, holding her eldest son Jehuda. Below her, the crowds on the bridge perform the Tashlikh ceremony. At right: The grace after meals is decorated with a lower panel of sukkah booths featuring removable rooves.

Piroska knew one thing was coming with them to Vienna: her grandfather’s sukkah covering. She carefully divided the large canvases into sections, then used a cut-up raincoat to wrap them in three bundles. Two were large, to be carried by herself and Jeno. The third, much smaller, was entrusted to Paul-Arye, so he’d always treasure it.

Their first attempt to cross the border failed, but three weeks later, at Christmas, the Lindenblatts tried again. This time they traveled by train and by day. Upon reaching a certain station near the border, they were to move to the guard’s carriage and wait to be taken across. But it seemed as if the entire train followed them into that car, hoping to leave. The smugglers made themselves scarce.

Piroska wanted to go back, but Jeno was determined. They made their way along the railway tracks to the signal tower, hoping the signalman would point them in the right direction. Inside the tower was another Jewish family – with money. These Jews bribed the rail worker to guide them across the border to Austria. But could he be trusted?

Lacking money to bargain with, the Lindenblatts agreed to act as guinea pigs. The families chose a code word which Jeno revealed to the signalman on arrival at what he claimed was the border. The fellow retraced his steps to escort the second family, while Paul and his parents began walking. Snow covered every possible landmark. Soon the Lindenblatts met other refugees, and they trudged on together. 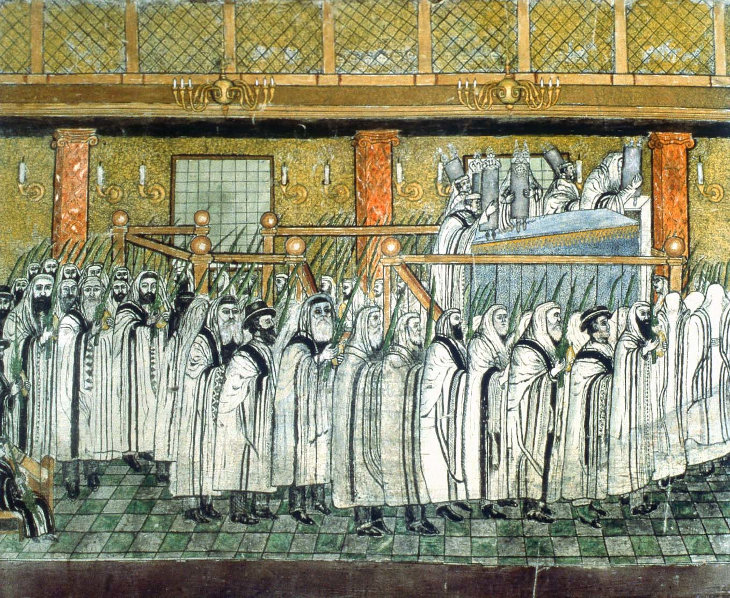 Lulav and etrog in hand, worshippers circle the reader’s platform on Sukkot in the synagogue, as featured on the sukkah’s lower panel

Suddenly two soldiers confronted them. “We’re taking you back,” the men barked. Jeno lay down in the snow. “You’ll have to carry me. I’m not moving,” he grunted. “We’ve come this far; we’re not going back!” The fugitives scrambled for something with which to bribe their captors. Piroska had a spare pair of shoes. Someone else found another pair. Those four shoes were their ticket into Austria.

Now sure of their way, the group staggered forward through the deep snow and bitter cold. Piroska’s shoes were lost in a snowdrift, so she continued barefoot. Then once again, there were people ahead. Someone shoved something round and hard into Paul’s hand. His nerves stretched to the breaking point, he was convinced it was a hand grenade. He looked down and saw it was only an apple. They’d been met by the Red Cross.

The Lindenblatts soon found themselves in a DP camp in Austria. Refugee papers came through, and they set out with Andor for America. Wherever they went, Arye’s sukkah covering never left their sight. The luggage compartment was for suitcases, not priceless family heirlooms.

The family settled in Williamsburg, Brooklyn, slowly pulling itself back together. George came from England, Jehuda from Israel. Whenever an important guest came over, Piroska would piece together the sukkah covering. 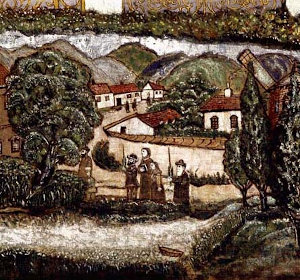 With the four species of the Sukkot holiday in the Hungarian countryside, detail from the Kavanot sukkah panel

Years later, when the family elders were no more and the sukkah had been moved to Jehuda’s house, Paul-Arye overheard two men talking in his pharmacy in Boro Park. They said a new museum would soon showcase the culture and history of the millions of Jews who’d sailed past the Statue of Liberty and settled in the U.S.

Paul and his brothers began to wonder: they weren’t getting any younger, and would the next generation know what to do with those pieces of canvas, still folded away?

After as much family deliberation as it took to leave Budapest, Arye Steinberger’s magnificent work of art was loaned to the Museum of Jewish Heritage - A Living Memorial to the Holocaust. Though made to decorate the temporary walls of a sukkah, Arye Steinberger’s masterwork, now cleaned and restored, has become a permanent part of Jewish history.

With thanks to Paul Lindenblatt for his firsthand recollections. Republished by kind permission of Segula Jewish History Magazine, www.segulamag.com

A Sukkah in Kuwait

Sukkot: Living Under the Stars
Lokshen Noodle Kugel Recipe
G-d Time
Shavuot is The Holiday of Cheesecake and Blintzes
Comments