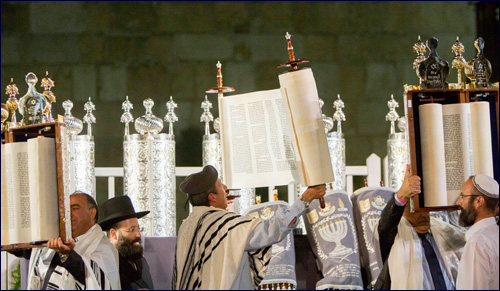 The joy of Simchat Torah: every letter counts.

Last summer, a ceremony was held at the Kotel in which 75 Torah scrolls were dedicated in memory of the 75 soldiers killed in Operation Protective Edge. There were thousands of people at the dedication, including the families of the soldiers, President Rivlin, Rabbi David Lau, Rabbi Yitzchak Yosef, Defense Minister Moshe Yaalon, chief of staff Gadi Eisencott and Shin Bet chief Yoram Cohen.

Most of the Torah scrolls had been hidden in a basement in Romania during the Holocaust and with the help of a huge contribution from Jews all over the world, were then brought to Israel. After the dedication ceremony, the Torah scrolls were given to synagogues across the country, and one Torah remained at the Western Wall.

“Our sons who were killed… remain as eternal letters. These scrolls are our identity; they are a symbol of continuing life.” President Rivlin

During the ceremony, the distinguished guests and families of the soldiers wrote the last letters in the scrolls. Before he wrote one of the letters in the Torah scroll, President Rivlin said, “I am writing to honor the sanctity of the Torah scroll. The Jewish people chose the Torah to commemorate the death of our loved ones. These scrolls constitute our true identity. The Torah of the Jewish people has marched alongside us in high and low times, good and bad. The Torah accompanied us in our wanderings in exile and in our redemption. From it we draw strength and faith. Our sons who were killed on the altar of the homeland remain as eternal letters. These scrolls are our identity; they are a symbol of continuing life.”

Policeman carried the Torah scrolls, one after the other, in a seemingly endless line in the Kotel plaza. Dedicating these Torahs to the fallen soldiers did more than honor their memories; it gave each of them an infinite connection to life. Judaism teaches us that every Jewish soul is a letter in the Torah. Just as one missing letter in the Torah renders it incomplete, so too each and every one of us has a unique contribution that only we can give.

When someone dies, we mourn not only his physical presence but the tremendous loss of all of his gifts that the world needs. A sefer Torah embodies the beauty of each of their individual souls joining with the souls of the Jewish nation to create eternal meaning, letter by letter. Because every letter counts. Every single one of us has a letter to write, a meaning to create and share with the unique gifts that we are each given.

The Joy of Simchat Torah

The inauguration of a Torah scroll is compared to the joy of a wedding because it celebrates the Jewish people’s connection with God and with each other. On Simchat Torah that joy is exponential because we are celebrating every Torah scroll that has ever been written. We are honoring every Jew and every letter that has contributed to the growth and beauty of our nation. We are connecting to a joy that merges each of our individual connections to Torah to the connection that we have as a nation.

It’s a joy that we can’t feel when we are solely pursuing our own individual goals. I think of those 75 Torah scrolls that somehow survived the inferno of the Holocaust, and the words of the brilliant psychiatrist and Holocaust survivor Dr. Viktor Frankl come to mind:

“By declaring that man is responsible and must actualize the potential meaning of his life, I wish to stress that the true meaning of life is to be discovered in the world, rather than within man or his own psyche, as though it were a closed system. I have termed this constitutive characteristic ‘the self -transcendence of human existence.’

“It denotes the fact that being human always points, and is directed, to something or someone other than oneself, be it a meaning to fulfill or another human being to encounter. The more one forgets himself, by giving himself to a cause to serve or another person to love, the more human he is and the more he actualizes himself. What is called self-actualization is not an attainable aim at all, for the simple reason that the more one would strive for it, the more he would miss it. In other words, self-actualization is possible only as a side effect of self-transcendence.”

Max Steinberg, one of the soldiers killed during Operation Protective Edge whose memory was honored with one of the 75 Torah scrolls, embodied this self-transcendence. Max was an American immigrant and a sharpshooter in the Golani Brigad who was killed in the Gaza strip along with 13 other Israeli soldiers. Max originally moved from Woodland Hills, LA to Israel in 2012. He was a “Hayal Boded” a Lone Soldier, the term used for soldiers who moved to Israel without any family. His mother, Evie Steinberg, said that his last words to her during a 4am phone call before he died were: “Mom, I’m not scared at all. I’m scared for you. I’m fine. I’m going back in.”

Even though Max was called a lone soldier, his funeral was attended by thousands of Jews all over Israel. He gave his life for the Jewish people, and the Jewish people came out in droves not only to honor Max’s memory but to show that no Jew is ever really standing alone.

There should never be a lone soldier in our nation. There should never be a lone Jew. We each need each other’s letters. On Simchat Torah, we celebrate the joy of Jewish unity. We celebrate the joy of bringing each of our letters together. And we celebrate the infinite connection that we will always have with those who have come before us and those are yet to bring their letters into this world. Holding the Torah gives us a precious chance to transcend ourselves and become part of the eternal dance of the Jewish people.

Up Against the Wall: The Remarkable Odyssey of Arye Steinberger’s Sukkah Art
Why Are The Prayers Of Yom Kipur So Repetetive?
Ha'azinu 5783: A Time for Unity!
Twisted Thinking
Comments