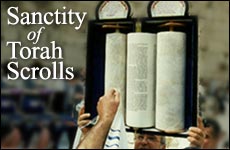 Our special relationship with sacred books.

Just as we are commanded to show respect for God's name, so also must we revere His teachings. We are commanded, "Stand up before the wise elder and give respect to the aged. You shall thus fear your God" (Leviticus 19:32). Just as we respect our elders who study sacred books, we must honor the books themselves.

One should therefore keep his sacred books and other religious articles on nice shelves or cabinets apart from his secular books. One should also be careful not to store sacred books near food where they may be stained or attacked by mice and vermin.

If a book falls to the ground, we kiss it as a sign of love and respect.

It is forbidden to destroy or desecrate any sacred or religious book, whether it is written in Hebrew or any other language. One must similarly be careful with worn or torn books, and even with loose and torn pages from sacred books. All these should be set aside in a special geniza (storage) and eventually buried.

Sacred books and religious articles should always be handled with respect. One should avoid shaking a sacred book or tefillin out of its container, and it is forbidden to throw them. Similarly, one should always be careful to place a sacred book right side up. If one leaves the room in the midst of his study, it is customary not to leave the book open, but to either close or cover it.

Sacred books should always be placed in a respectful place. Therefore, one should not lay them on the floor, nor sit upon a bench where they are lying. However, if the book is placed on some object and somewhat raised, one may sit on the bench, especially if there is no other place for the books. Likewise, one should avoid sitting on a trunk or case containing sacred books, unless there is no other place.

Just as it s forbidden to be waited upon by a religious scholar, it is prohibited to make use of a sacred book for anything other than for what it is intended. Therefore, one should not use a book as a sunshade, prop, or line marker. Similarly, it should not be used as a bookmark, or to hide anything in it. Likewise, one should not hit anybody with a sacred book, nor hide behind one.

Just as we respect sages according to their rank, so do we honor books according to their importance. Therefore, we place books of the Torah on top of those of the Prophets and Writings, and not vice versa. However, the Prophets and Writings are considered equal and may be placed in any order. Similarly, biblical books are considered more sacred than talmudic books, and the former should always be placed on top. This rule only applies when the books are bound separately. If they are bound together, a lesser one may be placed on top. Some maintain that tefillin should not be placed on top of a prayer book.

The Torah is the testimony of the covenant between God and Israel, as it is written, "Take this Torah scroll… that it may serve as a testimony for you" (Deut. 31:26). A Torah scroll must be treated with the utmost respect. We are taught that whoever honors the Torah will himself be honored.

It is forbidden to do anything disrespectful in the presence of a Torah scroll.

One must show the same respect before a Torah that one would show before an important person. Therefore, it is forbidden to do anything disrespectful in the presence of a Torah.

Just as we are commanded to stand before a sage, so also, when seeing a Torah scroll being carried, we must rise and remain standing until it is brought to its destination or is no longer in our line of vision.

When the Torah is taken out in the synagogue, the entire congregation must stand as long as it is being carried. It should also be accompanied by worshippers. This is implied in the Torah's command to, "Walk after God your Lord" (Deut. 13:5). It is customary to kiss the Torah as it passes by.

When a Torah must be transported, it is preferable that it be accompanied by a person who will hold it in his arms the entire journey. However, where this is impossible, it may be wrapped up and transported or shipped in any respectful manner. When a Torah is carried locally from one synagogue to another, 10 men should accompany it.

Out of respect and reverence, one should never touch the parchment of a Torah scroll with one's bare hands. This is permissible when one is repairing a Torah.

When a Torah is no longer usable, it should be placed in a waterproof container and buried, preferably together with a religious scholar. Similarly, articles used with a Torah, such as mantles and ties, should be buried when no longer usable.

If a Torah is dropped, it is customary for all those present to fast.

If a Torah is dropped, it is customary for all those present to fast at least one day, especially the one who dropped it. If one drops tefillin when not in their container, it is also customary to fast. In all these cases, one may redeem the fast with charity.

One who sees a Torah forcibly burned or desecrated must rend his clothing as in mourning. Two tears should be made, one for the writing, and another for the parchment. This rule also applies to other sacred books and to tefillin.

Some maintain that a printed Hebrew Bible or Torah is as sacred as a written Torah. (Still, one may never make use of a printed Torah, tefillin, or mezuzah for sacred purpose.)

All the above laws regarding a Torah scroll apply only when it is written in holiness by a religious man who is also a qualified scribe. However, a Torah written by an atheist or apostate who does not believe in our faith is not considered sacred and may be burned. It is even permitted to destroy the divine names in it, since they were written without sacred intent. A Torah written by an irreligious Jew or non-Jew, on the other hand, should be put aside, and neither used nor destroyed. This same rule applies to tefillin and mezuzot. It is preferable that all religious articles and books be made by religious Jews.

It is forbidden to embroider a scriptural verse on any article of clothing, even a tallit.

The respect we show for sacred writings includes all biblical verses written in any language. Because these verses are the word of God, they should not be desecrated or taken into any unclean place. For this reason, it is forbidden to embroider a scriptural verse or passage on any article of clothing, even a tallit. In addition, because of this, it was customary to underline biblical verses written in correspondence, so that they be recognized and not discarded.

The special Ashurit script used for writing the Torah is considered holy and should therefore not be used for secular purposes. It should not be used in advertisements or signs. Similarly, one should not use books or newspapers written in Hebrew script for any unclean or degrading purpose, even though they contain nothing of a sacred nature. It was for this reason that a different form of Hebrew script was used for secular purposes.

All accessories used with sacred articles may not be thrown away or burned, but must be carefully put aside and stored or buried. This rule applies to such accessories as Torah mantles, ties and decorations, the ark and its hanging, as well as tefillin straps and bags.

Accessories used for religious observances such as a sukkah, lulav, shofar, or tallit, may be discarded or burned after they are used since they are not sacred in themselves. However, they should not be thrown in the garbage or any other degrading place, but should be used for a good purpose where possible. We are taught that something used for one observance should preferably be used for another.

As long as an accessory is being used for a religious observance, it may not be used for any other purpose, out of respect for God's commandments. After the observance is finished, however, it is permissible to make use of it, although it should not be put to any unclean or degrading use.

Although we are commanded to respect sacred articles, it is not the objects that we revere, but God who makes them sacred. Accordingly, the Torah states, "Revere My sanctuary -- I am God" (Leviticus 19:30, 26:2). That is, I, God, require this reverence.

From "The Handbook of Jewish Thought" (Vol. 2, Maznaim Publishing). Reprinted with permission.

Crash Course in the Torah

Process of Transmission
The Promise Of The Land
Which Chat Are You On?: Parshas Behar/Lag Ba’Omer
Do You Like Slow-Cooked Food? Thank the Jews
Comments
MOST POPULAR IN Bible Basics
Our privacy policy