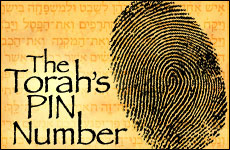 Identifying information that only the author knows.

How does an ATM work? You insert your card and enter your PIN. The machine gives you money. It won’t give you money if the PIN is wrong. PIN stands for Personal Identification Number. You know it. Nobody else does.

Does the Torah have a PIN?

The kosher laws are complex. They apply to everything you eat including meat, plants, fruits, vegetables, bugs, and processed foods.

Take meat for example. How do the kosher laws apply to meat?

Most meat is not kosher. That is because most animals are not kosher. A kosher animal has two distinguishing characteristics: it has split hooves and it chews its cud. It is rare that an animal has both features.

If an animal has a paw, it is not kosher.

What are split hooves? Look at the animal’s foot. Does it have a paw or a hoof? If it has a paw, it is not kosher. If it has a hoof, is the hoof a big block – like a horse? Or is it split in two – like a cow (it looks like two big, hard toes)? If it is split, that is one distinguishing characteristic.

The other is cud chewing. A kosher animal has multiple stomachs. It eats grass or grain, chews it, swallows it, brings it back to its mouth to chew again, and then swallows into a different stomach. An animal that does this is a ruminant. (The process is called rumination.)

Kosher animals have split hooves and chew their cud. They must have both features. One isn’t enough.

But if the animal has both, it is kosher. No more information is necessary. Split hooves and rumination are the only things to look for. Nothing else.

How about camels? No. They chew their cud but they don’t have split hooves.

How about pigs? No. The have spilt hooves but don’t chew their cud.

Out on a Limb

Look at an animal. Look at its feet. Look at the goo in its mouth. If the foot is split and the mouth is pasty, bon appétit. The Torah mentioned these two signs. And that is all it needed to say. It taught a simple rule to determine if an animal is kosher or not. And that is what makes these verses in the Book of Leviticus 11:4-8 so unusual:

Why does the Torah list these four animals? True, they are exceptions to the rule – each animal has one sign but not the other. But listing exceptions is unnecessary. The rule is already clear: both signs, kosher; one sign or no signs, not kosher. Simple.

That is a gutsy thing to say. What happens if you discover another animal with only one sign? Oops.

The ancient Egyptians had zoos. They had animals from all over Africa. They even had bears. The Jews were slaves in Egypt 3,300 years ago. It isn’t farfetched to think that some Jewish slaves visited the zoos of their masters.

Or imagine a different scenario. Maybe a rich Egyptian master took his Jewish slave with him on vacation. If he vacationed up the Nile in Sudan or Ethiopia – and wandered into the wilderness – the master and his slave saw new creatures they never saw before. Exotic beasts live in distant lands.

These are possibilities. You can probably think of a few more. And if an ex-slave helped write the Torah, he would not state: “Four animals have one kosher sign, but not both. There are no other exceptions.” He knows that someone could discover another animal. Why gamble?

But is it a gamble if you know that you’re right?

Look at this quote from the Talmud (Chulin 60b):

Was Moses a hunter or an archer? This is to answer those who say that the Torah isn’t from heaven.

Moses was not familiar with every type of animal in the world. But God was. It was risky for Moses to list only four possible exceptions. It wasn’t risky for God.

Pigs are the only animal with spilt hooves but don’t chew their cud.

If someone discovers an animal that ruminates but doesn’t have split hooves, just claim it is a shafan or arneves. Maybe the author inserted a fudge factor into the text. He covered all his bases.

But what about the pig? The pig is the only animal listed that has split hooves but doesn’t ruminate. The Torah doesn’t include an extinct animal to cover in case a new animal with split hooves that doesn’t ruminate is discovered. And scientists have classified thousands of animals since the Torah was written. Pigs are still the only animals that have spilt hooves but don’t chew their cud. Incredible.

Moses wasn’t a zoologist. He didn’t know the Torah’s PIN number. But the author did. Who do you think he was?

From the book, Discover This – based on the Aish HaTorah Discovery Seminar

NOTE: The Torah clearly states that the shafan and arneves are cud-chewing animals. According to Torah sources, cud-chewing is distinguished by five criteria:

A number of translators have suggested translations for shafan and arneves; however, none of their suggestions fit these five criteria. Some have suggested that caecotrophy (when an animal re-ingests soft pellets of semi-digested matter taken directly from the anus) could be considered cud-chewing. Based on the criteria listed above, caecotrophy clearly doesn’t fit the bill. Based on these factors, it is best to consider the shafan and arneves likely extinct. See Michael Allaby, A Dictionary of Zoology, and encyclopedia.com for a definition of caecotrophy.

Accuracy of Torah Text
The Promise Of The Land
Which Chat Are You On?: Parshas Behar/Lag Ba’Omer
Do You Like Slow-Cooked Food? Thank the Jews
Comments
MOST POPULAR IN Bible Basics
Our privacy policy