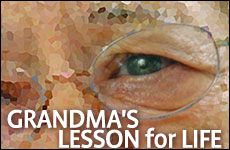 A hard-earned lesson about the purpose of life comes suddenly full circle.

One of my fondest childhood memories is visiting my grandparents' home. My father would bring my brother and me every Friday afternoon. Grandma would hover over us anxiously, feeding us her famous potato kugel, chocolate chip cookies, and ginger ale, all the while peppering us with questions and advice. Growing up among friends, most of whom had lost their grandparents in the Holocaust long before they were born, I felt very fortunate to enjoy the loving affection of doting grandparents.

Years passed and I grew up, married, and had children of my own. My grandparents' health began to fail. Grandma suffered from dementia and eventually she had to be put into a nursing facility where she spent the last seven years of her life. She seemed totally incoherent her last few years, incapable of even eating normally.

Visiting her was depressing; she was but a shadow of the vibrant, busy grandmother I had known and loved. I didn't even have the satisfaction of knowing whether my visits made any difference to her. I dutifully brought my children to visit the grandma they never really knew, but as time went on, the visits became shorter and less frequent.

My father would visit Grandma every single day. A loyal and loving son, he made sure she was well taken care of, and that she was given the proper nourishment and medication by the nurses. He also made sure she looked presentable, though I couldn't imagine anyone really knowing the difference. The nurses all knew my father would be there each day, gently checking on them, and they would treat Grandma more carefully than they would some of the other residents.

My father would often take my young children to visit their Eltere Bubby, their great-grandmother. They would return with enthusiastic reports, shouting with glee, "We saw Zaidy put make-up on Eltere Bubby's face!"

I wondered why God would prolong a life that seemed to have so little meaning to it.

I felt guilty not sharing my children's enthusiasm for visiting my grandmother, but I justified my behavior that they didn't remember her like I had, and it wasn't as depressing for them to see her as it was for me. In truth, I just didn't feel the same sense of responsibility for Grandma's well being that my father did, and I couldn't muster up that same tender affection my father showed his mother that had such an impact on my own children. I felt like I had already lost my grandmother several years earlier.

When Grandma passed away I was asked to eulogize her at the funeral. I loved my grandmother so much and I really wanted to express that love with the right words, but it was difficult planning what to say. The freshest memories in my mind of the past seven years were those of an incapacitated woman for which there was there not much to say. Frustrated, I wondered why God would prolong a life that seemed to have so little meaning to it. What purpose could there be to a life that is unable to perform any mitzvot [commandments] whatsoever?

But then it hit me. Who were we to decide what constitutes a purposeful life? Even after my grandmother was no longer able to care for herself, she had still provided her family with a model for the fulfillment of a most important mitzvah, honoring one's parent. My children were able to see their grandfather fulfilling his obligations to his mother with care and concern, although she may not even have known what was being done for her. Isn't that purpose too? After all, the primary function of a parent is to be an educator for his or her children. Sometimes educating may be more passive than it is active, but that may very well be the will of God for a specific individual in a specific time and place.

Belatedly, I realized that as difficult as the past seven years had been, we were very fortunate to have had Grandma playing her role as matriarch of our family. Whether she realized it or not, she afforded us a valuable experience. Ultimately, I have no doubt that Grandma, too, benefited from her role as a teacher for the family. That was her mitzvah.

Several years passed and my wife and I were blessed with another daughter. Our joy was marred when shortly after her birth the doctor quietly informed us that the baby showed certain signs characteristic of Down Syndrome. Although we would not know the diagnosis for certain until test results returned, the initial feelings of fear and despair set in right away.

My wife and I looked at each other helplessly. The relatively smooth births of our other children, had not prepared us for this sudden turn of events. "How am I supposed to feel?" my wife asked, somewhat bewilderedly. "Is this really a simcha? We don't even know if the baby will ever be able to function properly. I don't know if I could handle this."

I tried to reassure her that many people with Down Syndrome are very high functioning, and with God's help, our daughter could be as well. But silently, I also wondered, "What if she won't be able to function properly? Of course everything comes from the Almighty, but what purpose could there be in a life unable to observe mitzvot? Is that not the purpose of our existence?"

I suddenly thought about Grandma who had taught us there can be purpose to life, any life, even when one is unable to perform mitzvot like everyone else.

Somehow, the question seemed to strike a familiar chord, though I wasn't really sure why. Then another familiar thought crossed my mind: Who were we to decide what constitutes a purposeful life?

I suddenly thought about Grandma who had taught us there can be purpose to life, any life, even when one is unable to perform mitzvot like everyone else. God, in His great wisdom, has a plan and a mission for every person, whether or not he or she is capable of realizing it.

A demented grandmother may fulfill her purpose by affording her family opportunities for mitzvot, and a challenged child can also fulfill her purpose in the same way, in addition to performing her own special mitzvot. Every child provides her parents with opportunities to practice love and kindness, and all the more so a special needs child. Of course, every parent would love to enjoy the nachas and joy a healthy child brings to his or her parents, but that is only secondary to the primary purpose in raising children, that of fulfilling the will of the Creator.

As I looked at our tiny, new daughter, I felt a wave of trust and encouragement wash over me. Hopefully, we would yet enjoy many accomplishments and much nachas from our daughter. But Grandma had already showed us that quality and purpose in life are far too valuable than to be measured by accomplishments alone.

Rabbi Ephraim Nisenbaum is the founder and director of the Jewish Learning Connection, an adult outreach organization in Cleveland, OH. He has authored The Narrative of Faith Haggadah (Feldheim), Powerlines: Insights and Reflections on the Jewish Holidays, and 49 Steps to Greatness, published by Targum Press.

Carrots Don't Cry
Is Grease the Word?
Dried Fruit Compote
Scientific Curiosity and the Divine Encounter
Comments
MOST POPULAR IN Spirituality
Our privacy policy
Aish.com Is Looking for Great Writers