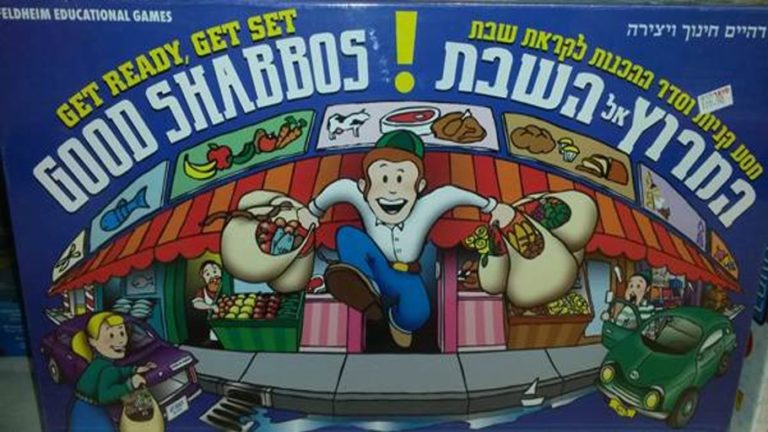 Board games are not just a chance to have fun in Israel; they teach kids how to be good Jews.

I was shopping for a Monopoly set in Israel, thinking I would find some board games, but instead I found out how to be a good Jew. Board games are not just a chance to have fun in Israel, they are an educational tool.

Here are the board games I came across, and what Israeli children learn by playing these games.

In Israel, we don’t play Monopoly. We play “Good Business.” It’s not just a game. We are playing for a place in heaven.

I always knew Monopoly was educating the next generation wrong. You shouldn’t be charging two thousand dollars for a one-night stay in a hotel, even if it’s on the boardwalk. Good Business shows children that you should be giving charity and having guests. Welcoming guests is a commandment in the Torah. Let them stay for free. You may lose money, but you are winning a spot in heaven.

The tagline “The Game of Jewish Businesses,” also makes it clear to the kids that Jews run the airlines, hotels, and have a lot of money. For fear of perpetuating more anti-Semitism, they left out banks and media; even though Jews do run all of those… in Israel at least. 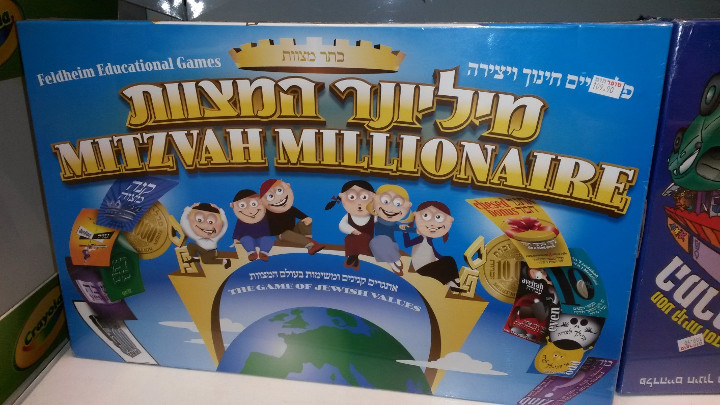 Are you really a millionaire if you are not performing commandments i.e. Mitzvot? Yes. That is not the point of the game though. We want the poor little guys to feel good too.

Like Good Business, the one who loses the game is doing the Mitzvah. Who is the real winner?! 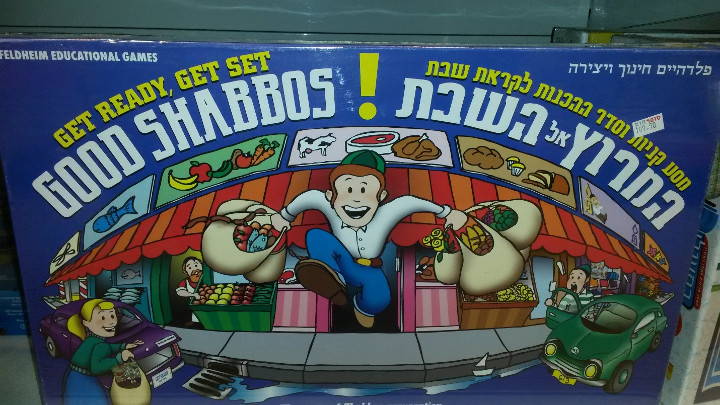 This game teaches kids that we should always be in a rush to get ready for Shabbat. Advanced planning is sinful.

As the package says, “the game of Shabbos preparation- lots of fun and recreation,” kids can play this instead of cleaning the house and running to the grocery on Friday to help their parents prepare. So much education.

At least this game is not electronic. Otherwise, it would be “Get ready, get set, can’t play this game, we just lit the Shabbos candles, go to shul.” 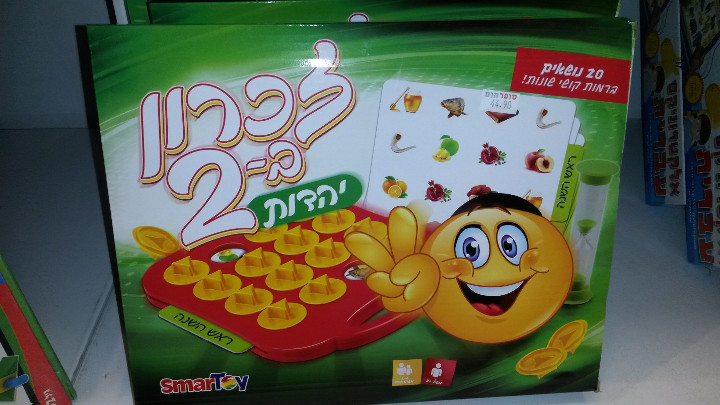 Teaching children to get along with others, this is Memory for Two. We don’t play Memory by ourselves in Israel. It’s a group game here. And it’s a religious experience. How do I know this? Because even the smilies have Yarmulkes.

If the kids can just remember where they hid the bread when we go around the night before Passover, searching for Chametz, that would be helpful. 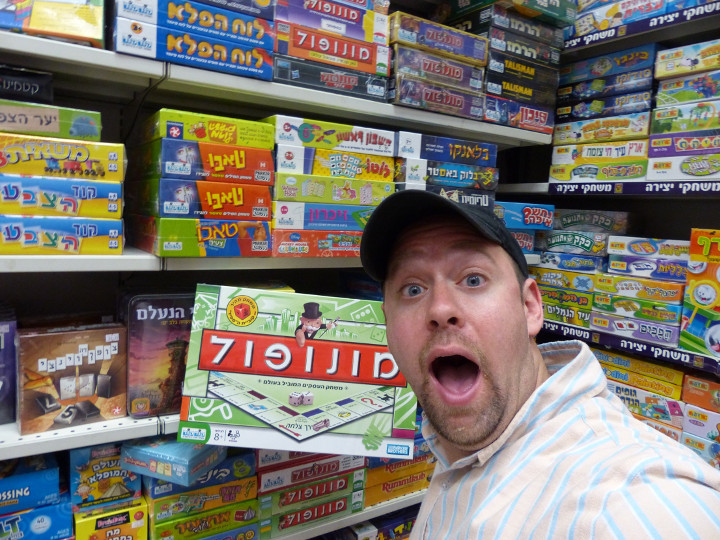 That game took me a while to figure out. I guess we do have Monopoly in Israel.

We are very economical, so we save letters and call it something else. Correct, that is Monopoly in Hebrew, which is why it costs an extra $35.

Four in One Line 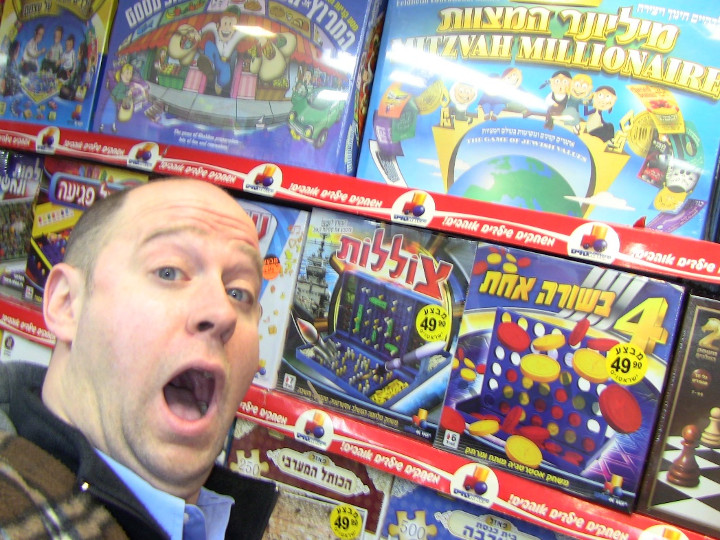 We don’t play Connect Four. We play “Four in One Line”. We explain the games in the title.

The only game I can’t figure out is Matkot. Nothing can explain an Israeli racket sport that you play on the beach, where there is no winner. 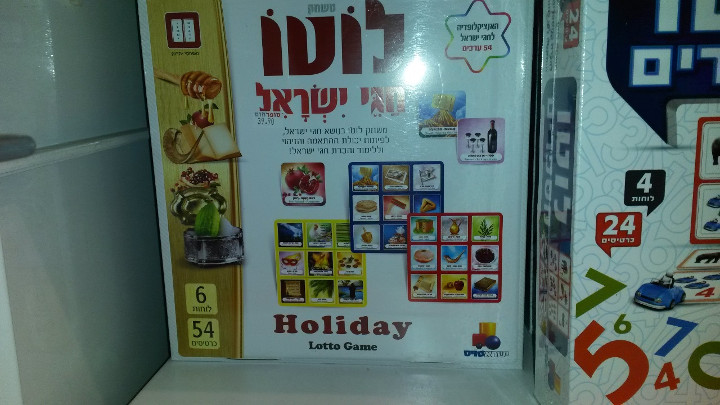 This game was put out by the Israeli lottery people, Lotto, as a gateway game. Dreidel doesn’t do it for everybody. This game teaches you about the different holidays of Israel and prepares you to play the lottery, in hopes that you will win and be able to afford the food you will need to buy for the holidays in Israel. Hamentashen and Matzah are very expensive nowadays.

The real lesson: If you are going to place a bet, make sure to do it during the holidays. And should we not remember the lottery of Haman on Purim, trying to figure out what day the Jews should be killed on? He had to come up with that Purim game all by himself. He didn’t have Lotto. There weren’t many outlets back in BCE. Haman’s problem was that they didn’t have 7-Elevens in Persia. 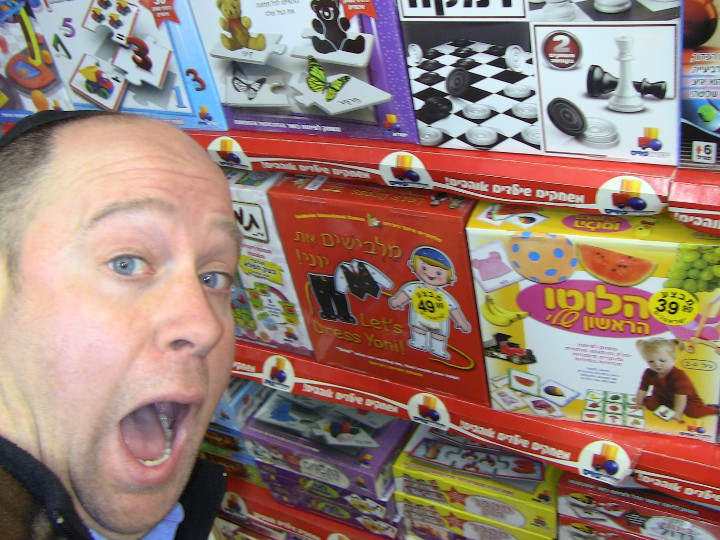 They really do start kids young over here. 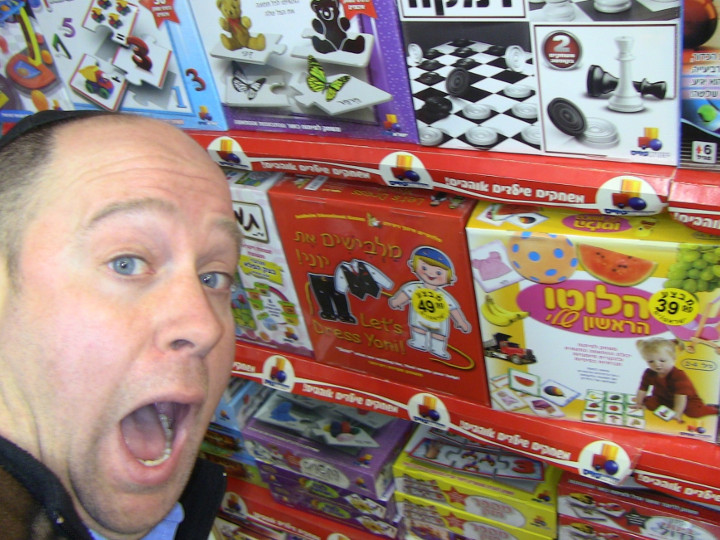 Why is Yoni never dressed? That is the question this game brings up. I think someone’s gotta have a word with Yoni’s parents.

I feel like this game started as one of those manipulative parent games in the home. Yoni was gullible and loved it, so his parents started marketing it. Then, they came out with the game Let’s Tie Yoni’s Shoes, and Yoni’s favorite, Let’s See Yoni Eat His Chicken and Vegetables Before Yoni Gets Dessert. And the last in the series, Let’s See Yoni Get a Paper Route so he can Contribute to the Grocery Bill. 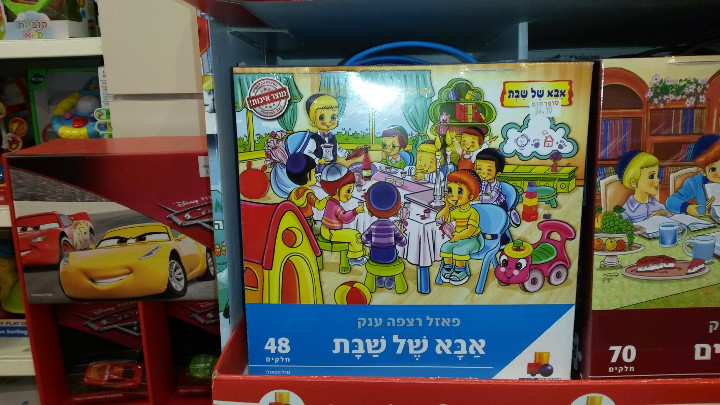 This puzzle depicts the famous “Abba Shel Shabbat” or “Shabbos Abba” that takes place in nurseries across the country every Friday when one boy is chosen to be the “Shabbos Abba” and one girl the “Shabbos Ima.” This is the best day of the year for the chosen child and the worst day of the year for the other 29 in his class. The Shabbos Abba gets to do many of the things an actual Abba does such as make Kiddush and Hamotzi. It does not come with other Abba responsibilities such as paying the utilities bill or the mortgage. You can practice that when you play Monopol.

Israeli board games are a way of checking if kids remember what they learned in school. Why they are teaching kids how to gamble is a different question.

You cannot play any Israeli board game without knowing the commandments of the Torah. So, make sure you study and learn, maybe even go to Yeshiva for a few years before trying your hands at these games. At least cram a bit and learn the Aleph Bet, so you can join in the fun.

How Smart Is That?

The New Jewlarious Blog!
The Connection between Israel and the Jewish People
Grit and Torah
Why We Can’t See True Reality
Comments
MOST POPULAR IN Funny Stuff
Our privacy policy