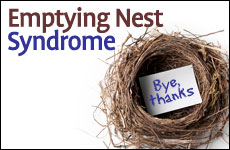 After 18 years of selfless love, all I get before my son leaves is: “Bye, thanks”?!

I am not usually reduced to tears by the sight of an industrial-sized twin-pack of ketchup in the supermarket. In fact, I would humbly submit that my friends and family are unlikely to accuse me of being overly sentimental about condiments in general. However, I had to make an exception on a recent sprint through the market because my youngest son, who never met a meal that didn’t go down better under an avalanche of ketchup, had just jetted away to the East Coast, creating the third and penultimate empty space in my nest.

I was still adjusting to this new reality, so it was an automatic reflex to reach for the super-sized containers. But I caught myself during the bicep curl required to lift the containers and realized that now, a normal-sized bottle would do just fine. I took a few minutes to compose myself before heading to the cereal aisle, where I held up courageously until a box of peanut butter puffs reduced me once again to a quivering mass of maternal emotions.

You’d think I’d be made of sterner stuff. After all, I’m a seasoned traveler down this road. But all our kids keep pulling the same trick: The minute they graduate high school, next thing you know they’re rifling through the luggage and extracting the largest specimens, ordering airline tickets -- using our credit card -- and then leaving. Just like that!

It never fails to amaze us that after 18 years per kid of dedicated, selfless Jewish parenting, and endless infusions of love, guidance, food, sports equipment, orthodonture, music lessons, cash, and personal chauffeur service, they just blithely heft those suitcases easy as you please, grin like they haven’t grinned since they had finished tallying up the bar mitzvah checks, and say, “Bye!” and “Thanks” as they make a beeline for the airport security check.

As we had done twice before, my husband and I looked at each other as another of our children trailed out of sight. Memories flooded our brains till they couldn’t process any more: reading bedtime stories, tucking dollar bills under the pillow via the Tooth Fairy, gluing tiny islands of Micronesia to maps for science projects, cheerleading from the sidelines at Little League games, listening attentively during parent-teacher conference night as teachers strained to find words that sounded better than “troublesome” (the Yiddish word “leybedik” arose frequently), driving to the ER for nerve-wracking visits after various injuries, keeping our mouths shut during trying teenaged moments, and other investments into this most precious commodity. Bye! Thanks!

Naturally, this son was just copying his older brothers, who had the temerity to do the exact same thing in recent years. But he has always followed their lead, no matter how crazy the stunt, from parading around in the unforgettable fashion rage known as “underwear hats” to competing to see who could jump the farthest into the yard from atop a seven-foot high concrete wall. And their younger sister, the only remaining minor in the house, has undoubtedly been taking notes of these leave-takings and plotting her own stratagem. I imagine she privately scoffs at how few shoes her three brothers pack before they leave, yet inexplicably consider their foot gear wardrobes complete.

Fortunately, I also enjoy some advantages to the kids leaving home. For one thing, I get my car back. While I enjoy walking as part of an overall healthy lifestyle and a way to lower my carbon footprint, it does get tedious to have to hoof it everywhere. Somehow, though, the minute my kids get drivers’ licenses, my car disappears, sometimes for days at a time. Second, it is refreshing to suffer fewer incidents of eye-rolling, mumbling, and stealth texting at the dinner table – all symptoms that you are dining with a teenager. Finally, in our own quiet way, we are celebrating this milestone. We remind ourselves – frequently – that this was actually part of the plan, to nurture these kids into fledgling adults who would be incapable of hiding their zeal to leave home. We are told by psychologists that this is a normal and healthy part of the process in which kids “individuate” from their parents. In any case, that’s our story and we’re sticking to it.

And even we admit that as much as we love them, it could be embarrassing to still have them around and absconding with my car when they are 30, an age when we expect at least one grandchild per kid. So we are rattling around in our quieter nest, but, thank God, they stay in such frequent contact. Barely a week goes by when we don’t get heartfelt text messages, many of which begin, “need more $$$. Can u go to bank?”

I take comfort that we still have our daughter at home, even though she also has designs on my car and speaks openly and enthusiastically about leaving home in a year and going to a seminary in Israel. When that happens, my husband and I will have more freedom to take a vacation together and celebrate having raised our kids to some degree of independence – if we can find any suitcases or money left.

How to Visit Parents & Grandparents During Coronavirus