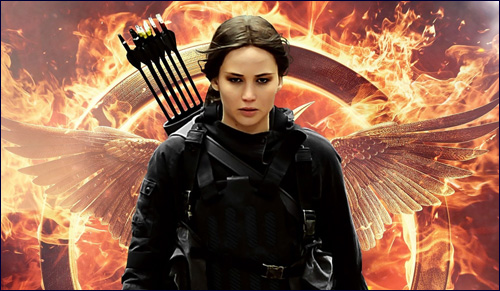 In the final installment of the Hunger Games Trilogy, Katniss emerges as having all of the attributes of a great leader. These attributes are also shared by many of our great Jewish leaders.

Yeah, it’s another one of those young adult fiction crazes. Harry Potter started it, then we had the Twilight Saga, and now the Hunger Games. The latter has many similarities to its predecessors. It has been lucrative; 65 million copies of the books have sold in the US alone, the first three movies earned over $2 billion worldwide, and this figure will rise with the release of the last in the series this week. The producers have ensured maximal profits by splitting the final novel into two movies, as with the Potter and Twilight franchises. Most irritating because the result is two Mockinjay movies that are uneven in tone and lack the intensity of the first two action-packed movies. Fans sense that they are being exploited by the producers, and the profits have fallen off somewhat, but despite this, Collins’ vision as a whole deals with much darker, weightier and more pertinent issues than Potter and Twilight.

Katniss is an unwilling figurehead but realizes she has a responsibility she cannot neglect.

In case the whole Hunger Games thing has passed you by, in this dystopian vision children are pitted against one another in a fight to the death by their decadent oppressors in the Capitol. The whole tournament is televised, and is the highlight of the year for Capitol residents. It is also used as a means for the Capitol to keep down the enslaved peoples of the Districts whose function is to provide for the depraved appetites of those living the high life in the Capitol. The final novel, Mockingjay, deals with the climactic confrontation between the two sides.

Clearly the themes are much more disturbing than wizard wars or vampire/werewolf love triangles. Much has been made of the criticism posed by the Hunger Games of the reality TV culture. For me, Strictly Come Dancing (the UK equivalent of Dancing with the Stars) will never be the same. And since the Games’ competitors are children, comparisons have been made with William Golding’s classic novel, Lord of the Flies, in which children become murderous and savage. The effects of war on the various characters is something that is examined deeply, and some of the episodes in Mockingjay are strikingly pertinent following the horrific events in recent weeks where innocent people of all ages and races have been targeted indiscriminately.

Critics have also been keen to examine the gender politics of the Hunger Games. At last, the feminists cry, a female lead who proves that girl action heroes can be just as successful in Hollywood as their boy counterparts! Indeed, Katniss Everdene is a complex heroine who straddles gender stereotypes - she is a warrior, but she is also a nurturing older sister, she is strong but she is also vulnerable, she is filled with rage but she is also loving. And of course she is just totally cool, and that’s why everyone, male and female, loves her. Peeta and Gale, the male protagonists, are also complex and ambiguous. They form the axes of the obligatory love triangle, however unlike Twilight, this aspect of the story is secondary.

But in Mockingjay a different triangular relationship struck me. The war against the Capitol is throughout the series depicted in part as a personal confrontation between Katniss and the President of the Capitol, Coriolanus Snow. Snow is, as suggested by his Shakespearean name, the typical unscrupulous Roman ruler, resorting to anything to retain his power, including poisoning his would be opponents, prostituting Games victors, and of course the murder of children. Katniss literally and thematically stands against everything he represents, even managing to retain her morality despite being a killer - she only ever kills in self-defense.

In the last novel, another leader is introduced, Alma Coin. Whilst Katniss is the figurehead of the rebellion, Coin is the political ruler. Though we would expect Coin to be a ‘goody’ as part of the rebel camp, as the novel unfolds, and particularly in the final act, we see that Coin is as ruthless as Snow, and even treats him with deference in order to ensure her own immunity should things go wrong for her.

What Collins presents are politicians who grasp at power at any cost. That resonates…

Conversely, Katniss is an unwilling figurehead. She has no desire for power, but leads the rebels into battle through necessity. Her primary motivation is to protect those she loves, and when she is thrust into the Joan of Arc role she learns that she has a responsibility she cannot neglect.

Sound familiar? Of course. The archetypal Jewish leader is in this model exactly. Think of Moshe. Reluctant to accept the role of leader, he argues with G-d Himself, believing his brother is more suited to the task. Eventually Moshe must accept his role, and he becomes the greatest leader the world has even seen.

Furthermore, Moshe is lauded as the most humble person who ever lived. His humility is defined by the sages as an acute knowledge of his own abilities, which do not inhibit him but rather enable him to shoulder his responsibilities and lead the Jewish people in purity and wisdom. King David is another example of someone who was seemingly lowly but elevated to a position of great power and prestige all the while retaining his humility.

So too our Katniss is humble; she does not see herself as a person suited to leadership and does not want it, but she realizes that her prowess as a warrior and her passionate desire for justice make her able to inspire the uprising against the Capitol. This is refreshing for us because it is so seldom that we see public leaders who embody these traits.

So let’s cheer for the humble Katniss Everdene, a heroine of our times, but also a heroine whose strengths are timeless. Happy Hunger Games!